Emma and I had a very early start in Bali to catch respective 7:30 and 8:30 am flights to Perth.  Even though it was a relatively short flight of 3.5 hours, the change in temperature was pretty drastic.  The weather in Perth reminded me of the temperature in Mexico City in December—i.e. quasi t-shirt weather during the day outdoors, but chilly all the time indoors and damn cold at night.  Well, on a relative measure considering that I’d not encountered any cold weather at all since January.  Needless to say I did not have adequate cold weather clothing so I resorted to wearing long underwear, several t-shirts and my one remaining long-sleeved shirt until I could get myself downtown to buy some sweaters.

Emma graciously hosted me for nine nights in her house.  Her place is a bit outside of downtown Perth, but is easily accessible on public transit.  And, best of all it is really close to Fremantle (a.k.a. Freo, took me a few days to figure that out) which is a hip little port city that has been engulfed by the greater metropolitan area of Perth.  Best of all, Emma has a little zoo of sorts in her house as her two bunnies, Harry (Harriett) and Panda, roam around freely.  Panda in particular was really cute because he’s got terrible eyesight so he constantly runs into walls, has a bit of a loose bladder and sphincter when he gets excited, and is hilariously possessive of certain spots on the couch so he’ll just crawl over you as if you were a cushion on the couch.  Emma also has a pink cockatoo (a galah), Bat, wandering about with a ridiculously cute waddle.  Bat is REALLY jealous around Emma so he clings to her much of the time and attacks people if they get near her—well, he’s also known to randomly attack people.

Emma cooking a tasty curry with Bat hanging off her sweater.  Not a rare sight:

I learned some interesting things about Australians.  First, it is considered perfectly normal to wander around grocery stores totally barefoot—in winter no less.  Emma told me about that on the drive in, and sure enough, the very first grocery store that we entered had a large bloke standing in line barefoot.  Second, Australians are REALLY paranoid about foreign species invading the island.  Bringing in wooden items is quite the production (I had to ditch a pair of wooden bells that I had acquired in Thailand), and Australians produce the vast majority of their food, and as a consequence farming plays a prominent role in their student work visa program (if a student wants to extend their work visa for a second year, s/he has to complete several months working at a farm during the first year).  Third, and I learned this throughout my travels to this point, Australians are ridiculously nice.  In terms of culturally-western countries, they are in my opinion the friendliest people.  Fourth, in the countryside there exists such as thing as a “meat raffle.”  Apparently it’s normal for Australian pubs in the country to throw raffle nights where, for a few bucks, you can be entered into a draw for the chance to win a cooler full of meat.  Five, food is really expensive—but I’ll attach a caveat to that.  Yes, it’s normal for a pint of beer to cost $10-11 (the Aussie and CAD are essentially on par) but when you consider that prices in restaurants already include tax and tip, I would estimate that eating out is only 10-15% more expensive—a fair bargain given that wait staff are  paid very good wages (it’s normal for someone at a pub to earn $25-35 an hour).  I found that other items had prices comparable to Toronto.  I should also note that Perth is a natural resource-based city like Calgary—it’s fundamentally a mining town so prices were inflated by the industry and haven’t yet adjusted to the recent decline in mining for the region. Six, apparently if you get into a cab it makes them super nervous if you sit in the back seat.  Sitting up front with the drivers I had a ton of interesting conversations in my time there.

On my second day in town, Emma had some school work to do before her vet school term started up again which meant that I got to go to the school for a bit to take one of their greyhounds for a walk  As people surely know, I now have a lovely greyhound in my home, but I’d been obsessed with adopting one for the better part of a decade so it was a real treat to go out for a walk with a greyhound.  Sadly, the greyhound racing  industry in Australia only manages to adopt out about 11% of retired racers, so the rest end up getting put down (the adoption rate in North America is closer to 90%).  As such, vet schools in Australia will take in a dozen or so greyhounds a year.  However, half of them are put down and used as cadavers for the students.  Happily the other half are used for students to practice their examinations on dogs (greyhounds are really docile and compliant so they make excellent patients).  At the end of the year, vet students adopt most of them and the rest get taken in by other students and staff at the university.

On my third day in town, Emma had to leave for two nights to go off on a team-building retreat for school, leaving me in charge of the zoo.  I was pleasantly surprised that Bat and I became fast friends as soon as Emma was out of the picture.  I understand that at the time, I was pretty much the only person that Bat didn’t attack so I was very flattered and it was tons of fun to play pirate for a few days.

I hung around the zoo until 1:00 pm that day because I felt bad about leaving Bat in his cage all day.  When I left, the first order of business was to go to downtown Perth to buy a couple of sweaters.  Getting down there was pretty easy, the buses to the nearby LRT/subway come frequently and the ride down is very efficient.  A shot inside one of the buses:

I walked around the downtown core for a bit to get a sense of the city and I was able to locate a good shop to buy two great sweaters at fairly reasonable prices.  I then stopped at one of the chain pubs, the Generous Squire for some lunch and light reading.  In case you’re curious, this is what an $11 pint and an $18 hot dog (the cheapest main on the menu) look like:

In the early evening I went off to a neighbourhood by the name of Scarborough that is right by the ocean (but known to be a tad tacky) to catch some live music at an excellent music venue called Indie Bar.  The place is really cozy, has a decent patio and a great stage set-up.  I didn’t take any decent pictures inside the bar but I did shoot a few videos so that you can get a sense of the place:

00136 from Andres Hannah-Suarez on Vimeo.

00138 from Andres Hannah-Suarez on Vimeo.

The next day I went off to check out Fremantle.  Two shots of the market: 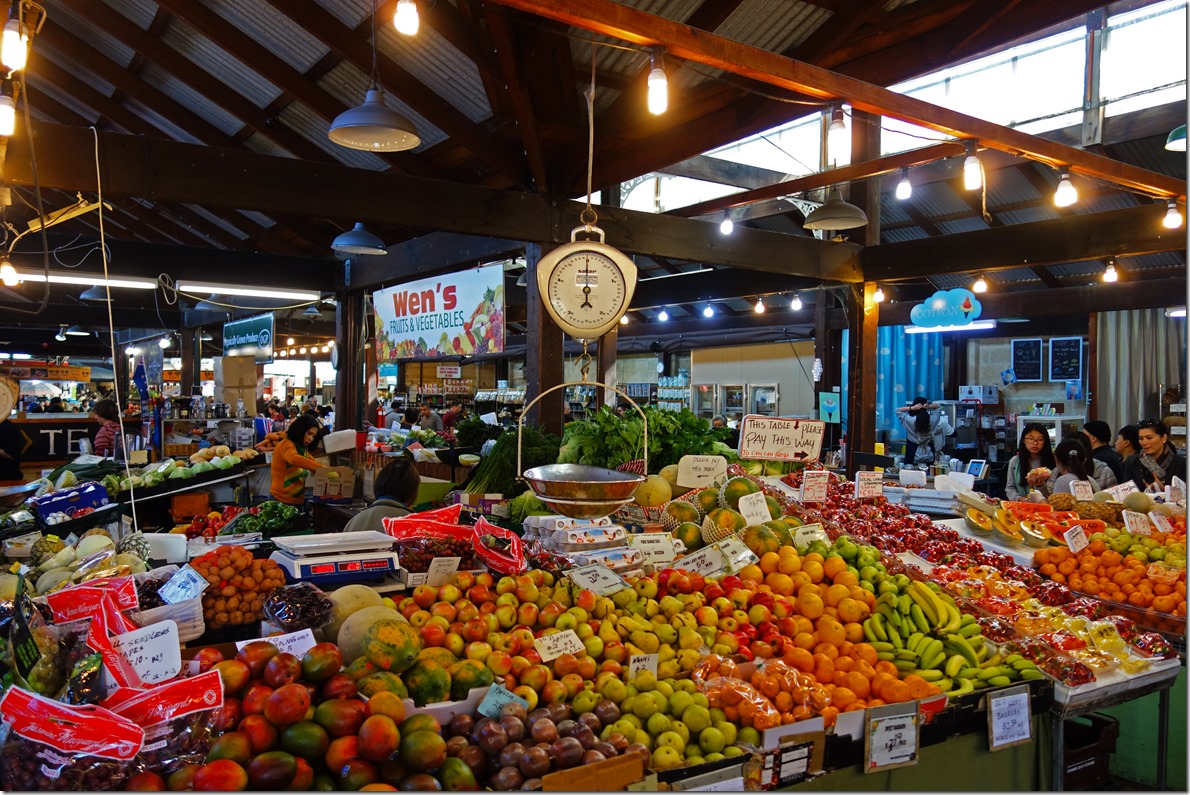 For lunch, I went off to an excellent brewery called Little Creatures that I am told makes one of the best pizzas in town, albeit for $20+.  Shots of the brewery and said excellent pizza:

At night, I took a bus, the subway and another bus to go to a live music venue called El Grotto in Scarborough to meet up with a local gal whose friends were playing a set there that night.  The bar ended up being one of the few bargains I found in Perth with $5 sleeves and pretty decent tacos.  A shot from El Grotto:

On my last day alone, I made another trip to Fremantle to check it out on a Friday given that it’s pretty quiet during the work week.  Through Trip Advisor I found a restaurant that came highly recommended, and it was good, but it was also the one place I encountered in Perth with ridiculous prices.  A small beer, a single main and a bit of bread came out to $45: 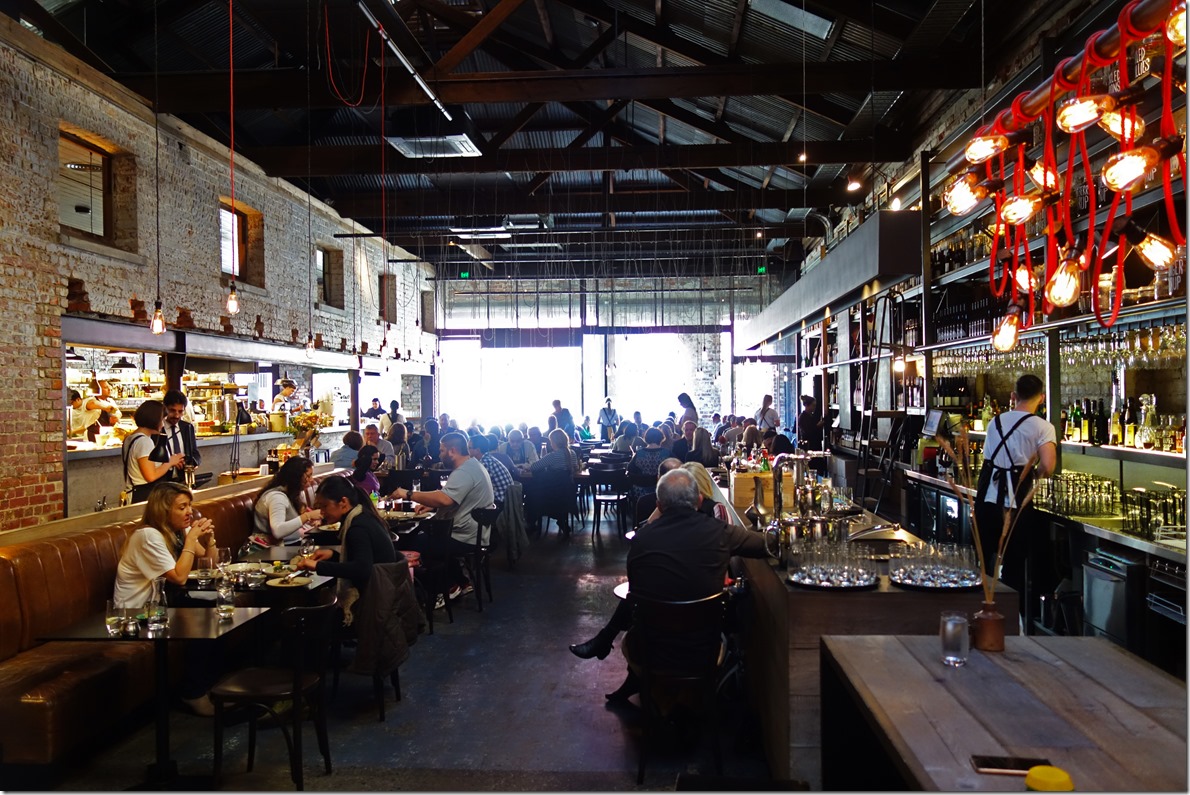 Emma came home that evening and sadly that is when my cordial relationship with Bat came to a swift end.  For some reason, the second she got home, Bat went on the offensive.  The weird part is that the change even lasted when Emma was off at school for the day.  And the little terrorist is super smart, he’d wait until I was wearing no shoes to go on full attack mode.  No more pirating for me.

On the Saturday morning, Emma took me to one of the posh areas of Perth by the sea for breakfast, a short drive away. 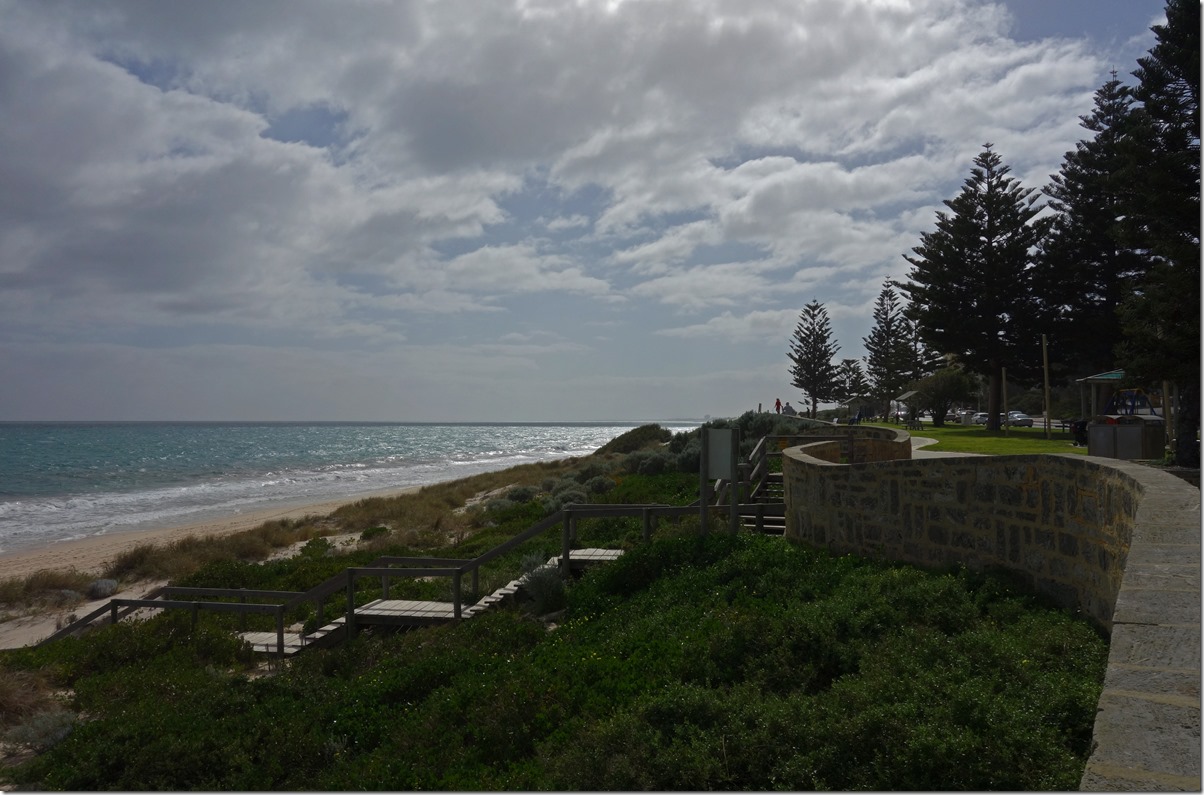 After that, we hopped in her car and went off to Yanchep National Park so that I could finally spot some koalas and kangaroos.  The park did not disappoint: 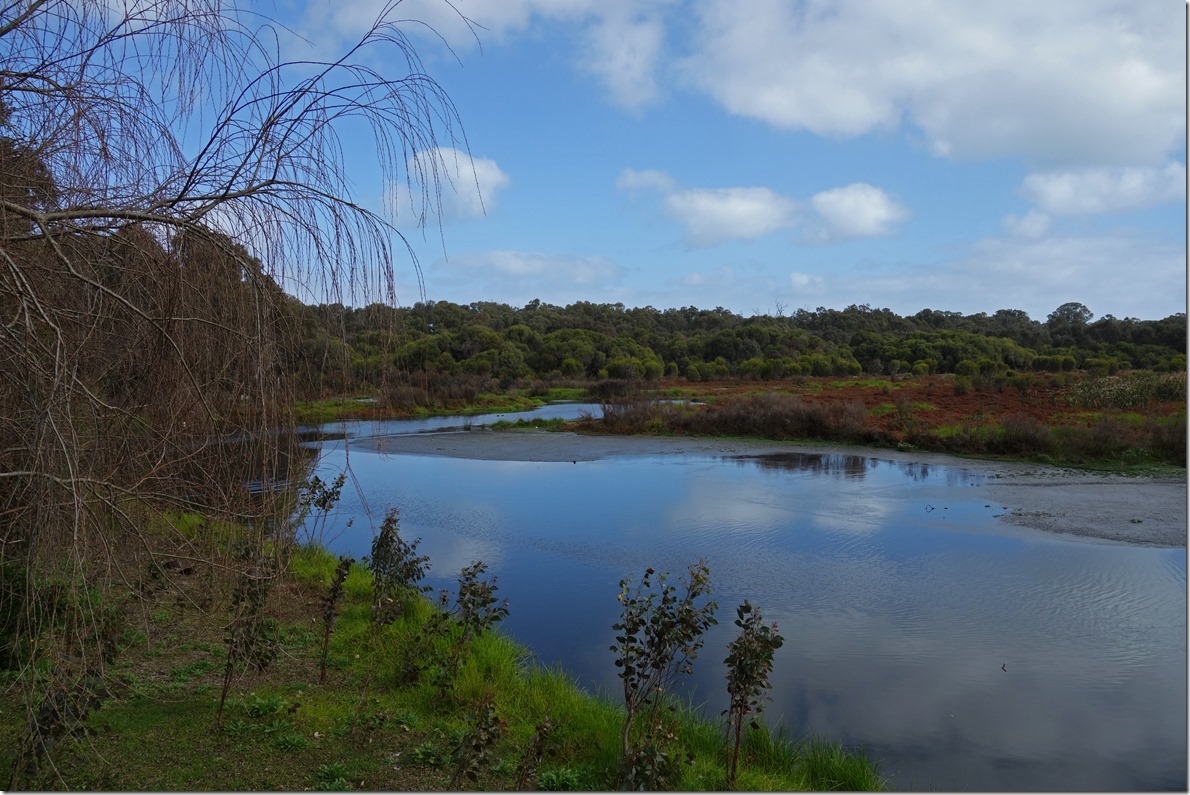 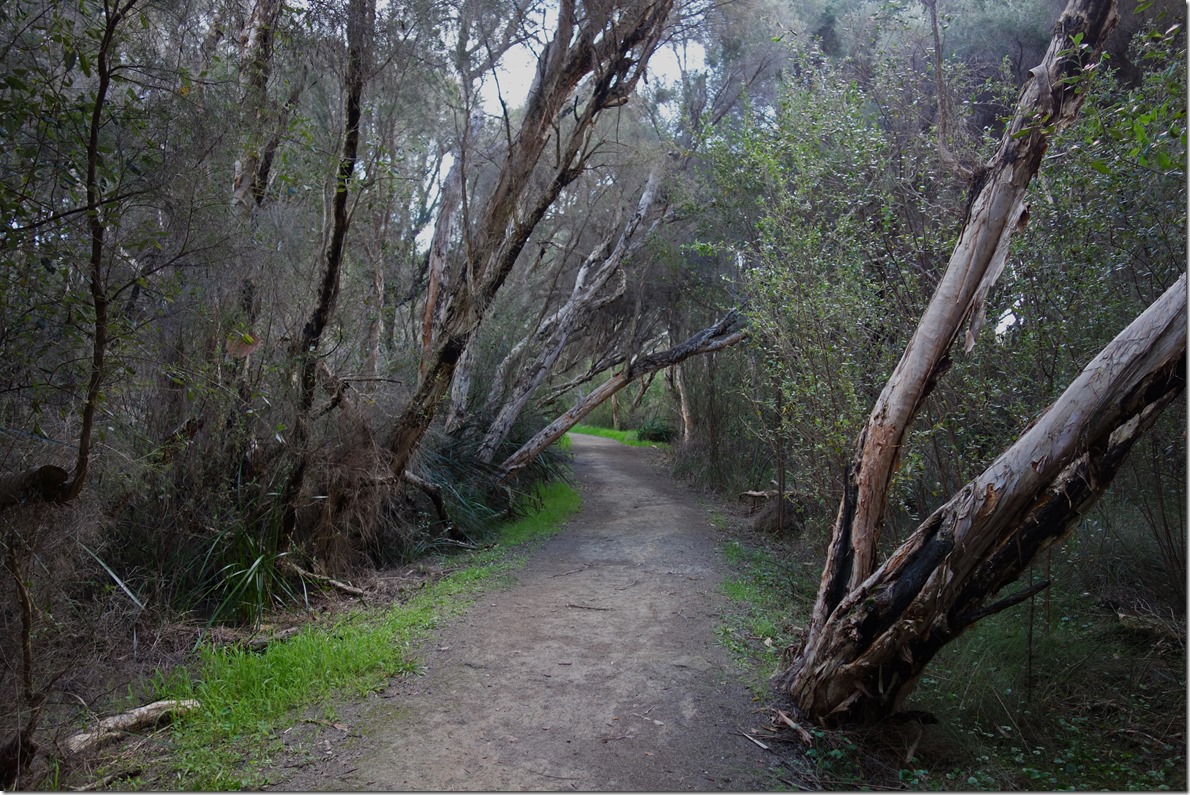 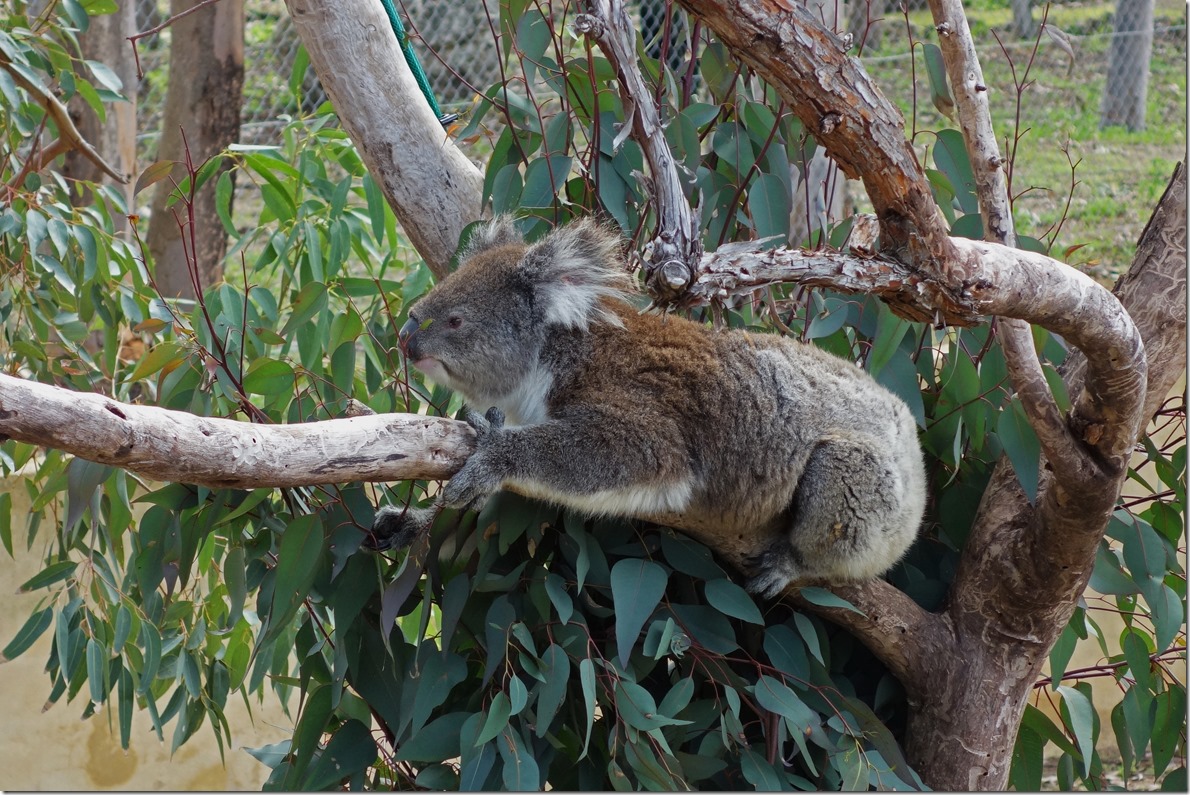 The show was an early one so we had time to go to an excellent Mexican joint for some tacos that did not disappoint.  Notice the trend?  I did not have a single bad meal during my week in the city.

The major disappointment of the night was that we then went to a cool little bar with a nice patio, and it was barely midnight when they shut the place down.  That’s when Perth REALLY started reminding me of the aspects of Vancouver that I don’t like.  I hadn’t noticed this before because on my prior nights out I left by 11:00 pm to make it back to let Bat out of his cage for a few hours before bedtime.

Random shot from the patio of the bar:

The following day I went back to Fremantle while Emma was at work and did some proper exploration of the town.  At night I met up with Emma for dinner at Fremantle and took in an early show at the excellent music venue in Freo, Mojos: 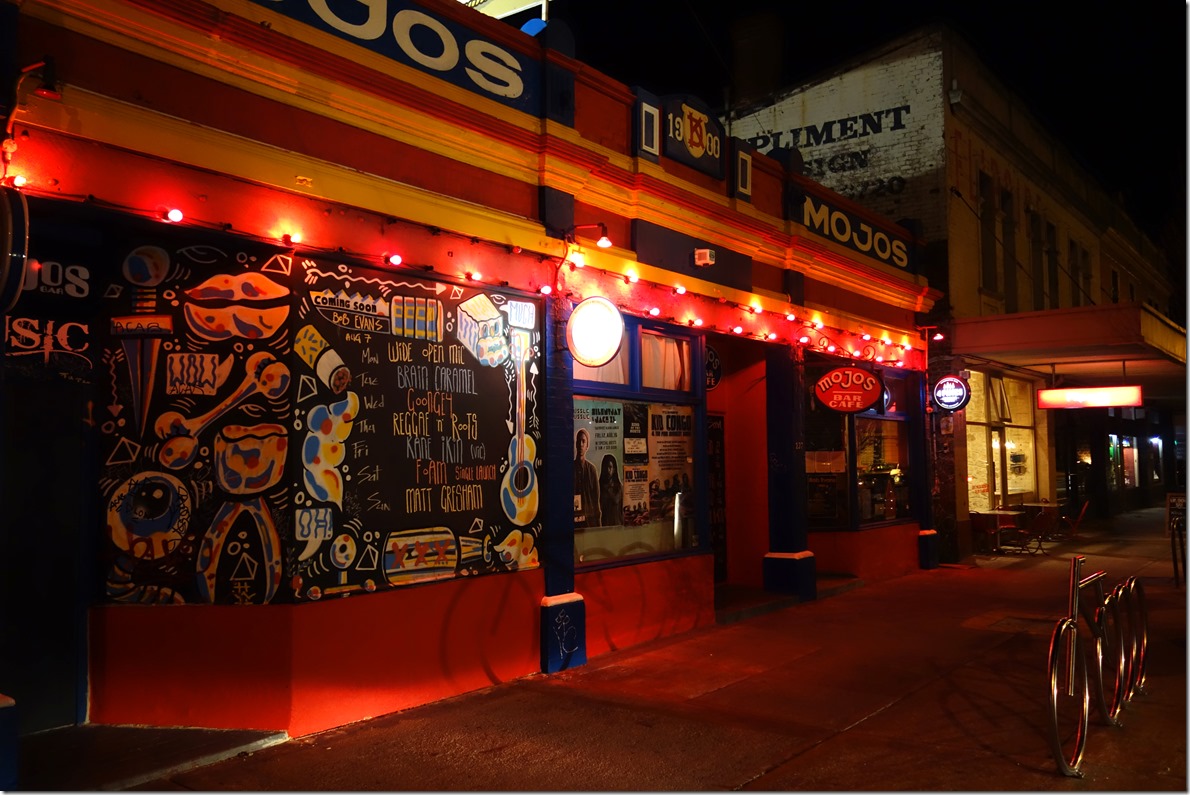 A brief video of the performance so that you get a sense of the place:

00147 from Andres Hannah-Suarez on Vimeo.

The next morning I went off on a super chill daytrip to the nearby Rottnest island.  The island housed an important military base to protect Perth from attacks during WWII and has been a great tourist destination ever since.  Getting there isn’t exactly cheap, the combined cost of the ferry, the $18 fee to visit the island, and the bike rental came out to $90 but it was well worth it for a day exploring the picturesque island.

Some shots of my delicious breakfast prior to the ferry ride, and of my time on the island: 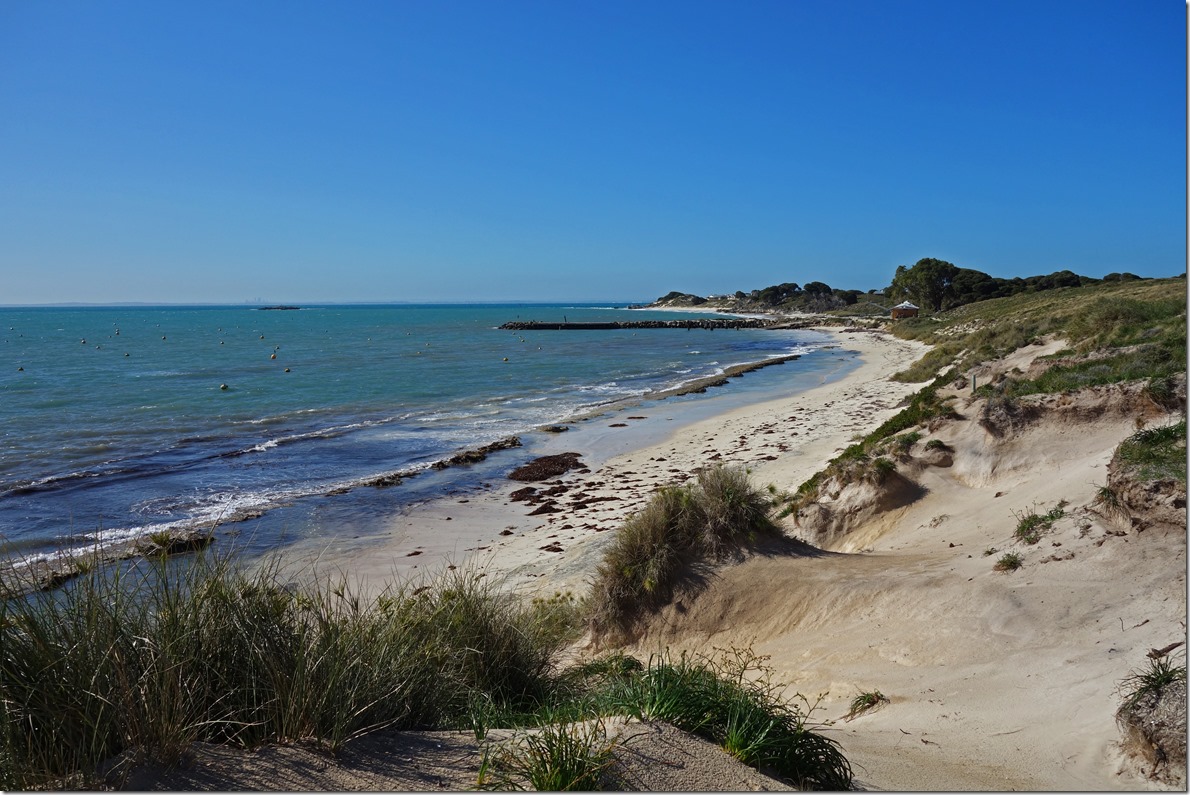 The resident marsupial of the island, the quokka.  These little fellows are not at all shy, when I was subsequently in a seaside pub, one of these little guys made it inside and was just hanging out: 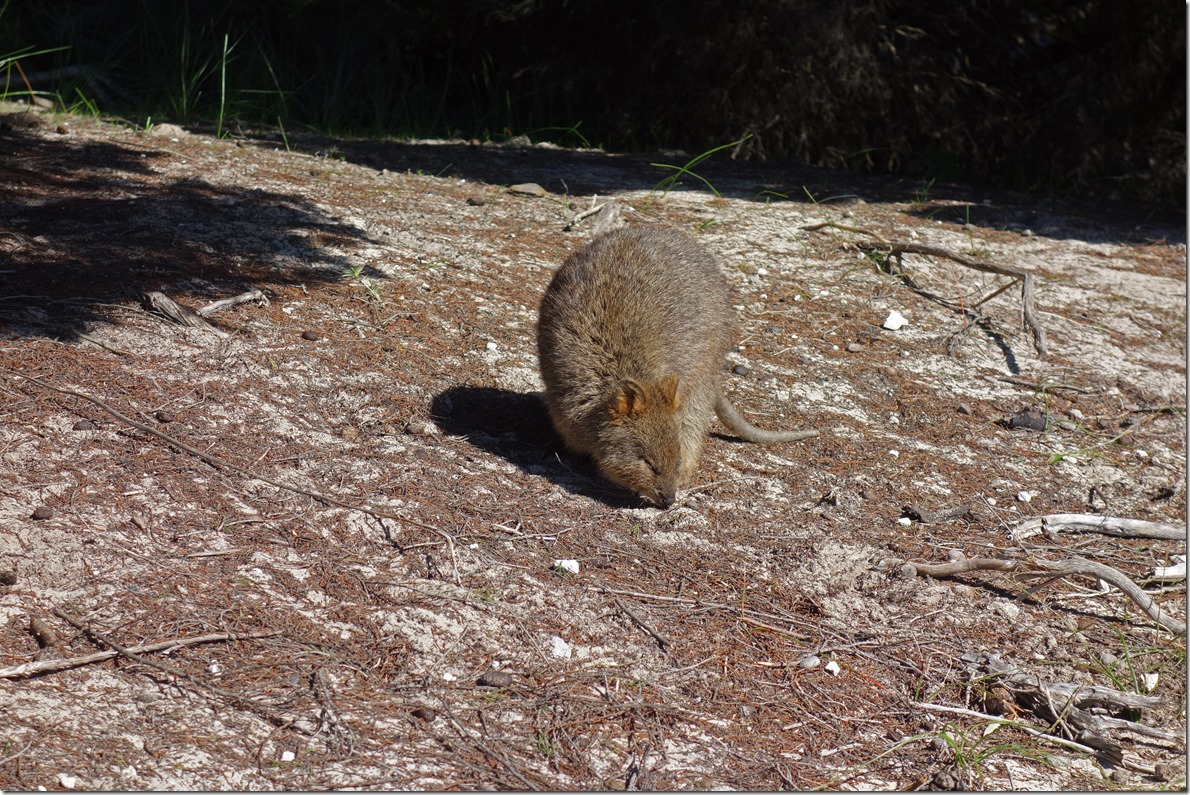 00150 from Andres Hannah-Suarez on Vimeo.

When I got back to Fremantle, I checked out the pub next door to Little Creatures, aptly named Creatures Next Door.  It was a fantastic place to catch a few pints overlooking the port:

The following day, I went into downtown Perth to check out Elizabeth Quay, eat some ramen (the one thing we do better in Toronto), and catch a mid-day movie at an awesome little theatre called Cinema Paradiso.

Some shots from my day in town: 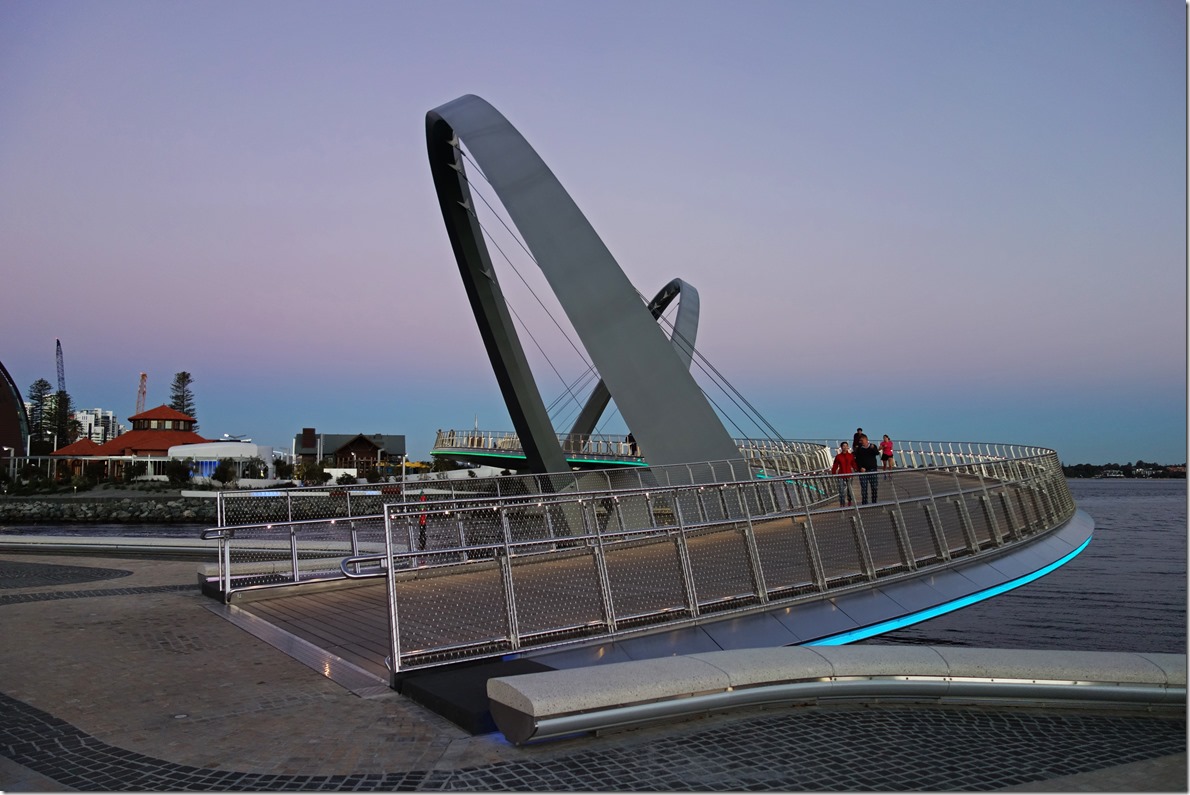 Dinner at Varnish on King, a board with serrano ham, pont léveque washed rind, and picalili (veggie Indian-style chutney), homemade lavish, and pickles:

I’ll leave you with two shots of my final night in Perth, back at Creatures Next Door for dinner with Emma: 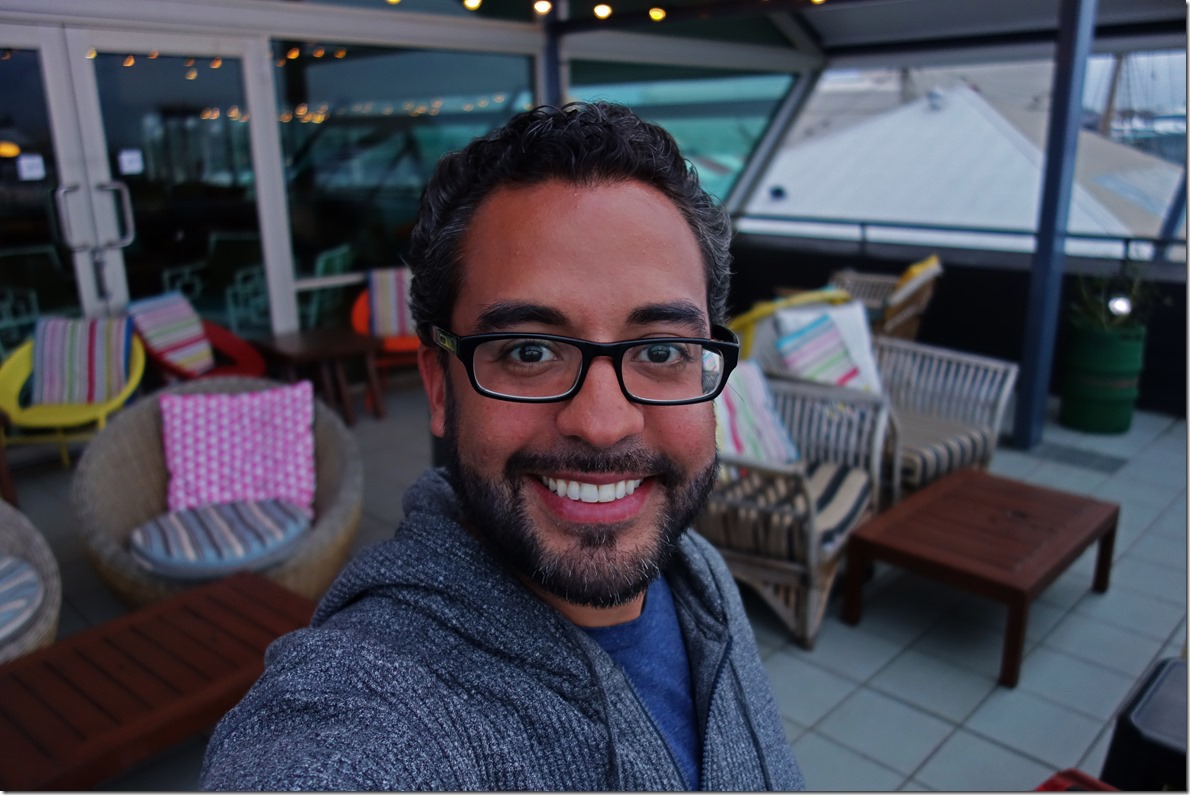 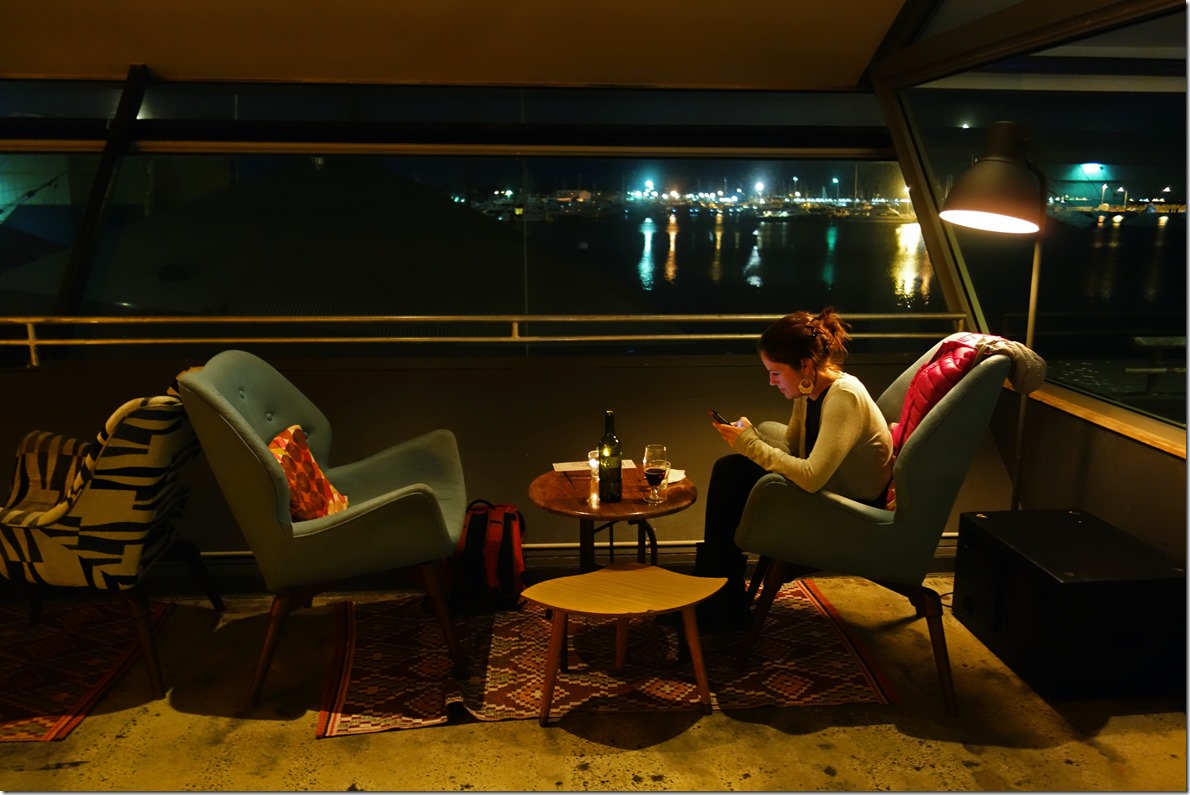