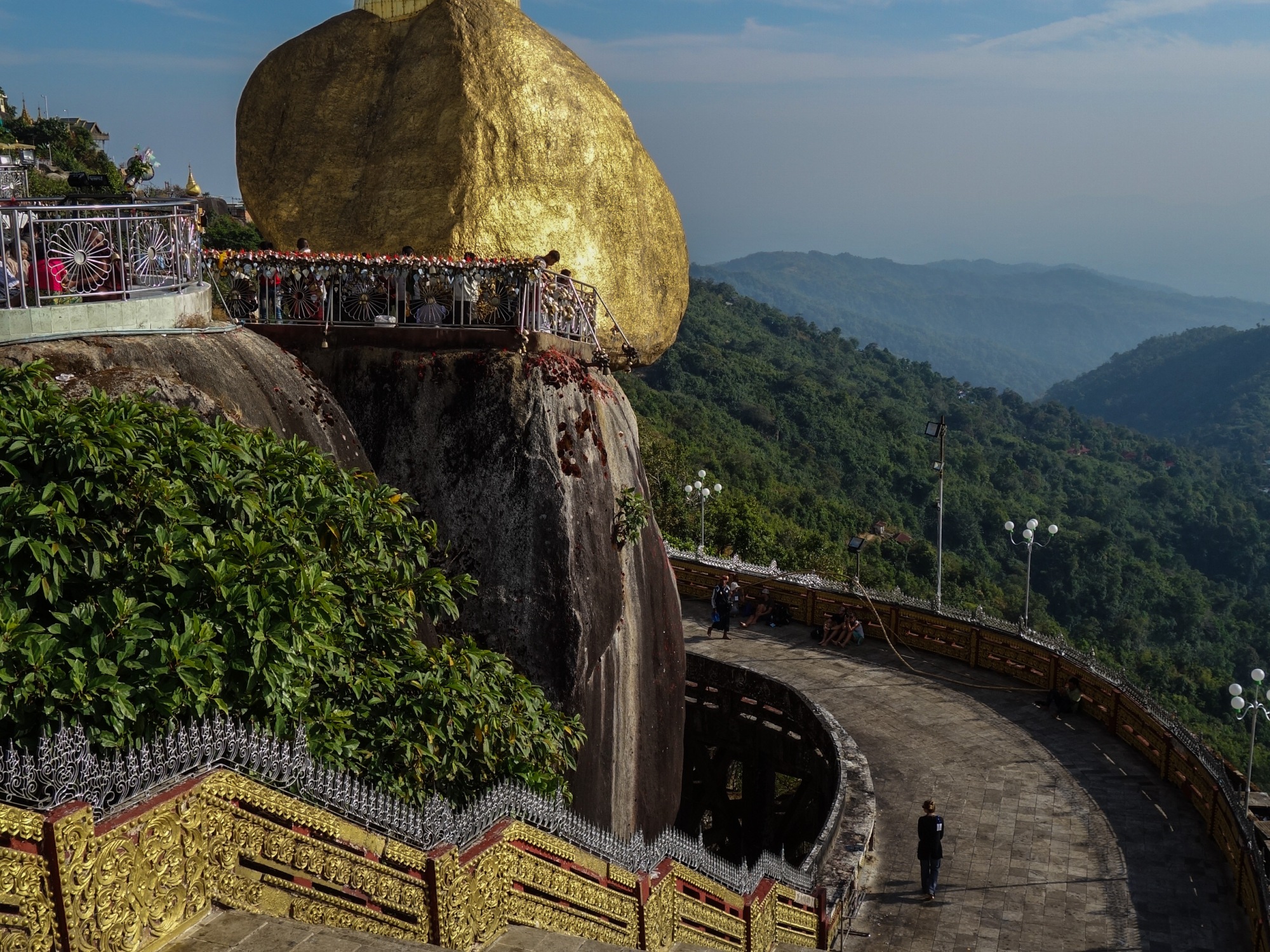 After the beach, I bounced back yet again to Yangon, this time at least heading in the right general direction towards my next destination–Kyaiktiyo, the home of the famous Golden Rock.

My time there was a bit of a disaster owing purely to the staff at my hotel. I had taken a night bus from Yangon, so I arrived at Kyaiktiyo at 1:00 am. Anticipating the late arrival, I called the hotel in advance to advise them of my arrival time. They repeatedly acknowledged that they understood, but when I arrived at the hotel, all the lights were off and the front gate was closed. The padlock was actually on, luckily it had not been locked. I had to push my way inside, and then call their general phone number to get someone’s attention. The person on duty looked completely surprised by my arrival. This should have been my first indication that no one at the hotel understands English, yet they pretend to.

Fast-forward to the following morning. Now, most hotel staff in Myanmar are very helpful. They’ll book your bus tickets and make all travel arrangements for your. Not so much at this hotel, and even getting basic information from them was difficult. First, I made some enquiries about how to get to my next town, some 3 hours way. I was told that it is very easy, I just need to take a taxi to the next big town 20 minutes away, and from there buses leave the town hourly to my intended destination. I triple confirmed that buses run all afternoon and all evening, and then I asked them about getting up to the Golden Rock.

Initially I was told that I needed to take a truck up. I asked if they could arrange for one to pick me up, the woman at the front desk said that she would, and immediately picked up the phone. I then asked if I should just sit and wait, and she replied affirmatively. Thirty-minutes pass and no truck had arrived so I asked her again, and she said that no truck was coming. I blew up a bit of course, given that she wasted 30 minutes of my time (query who the hell she was calling when she picked up the phone). She then said, “No, you walk” and pointed in a general direction. I confirmed three times, “Walk, all the way to the Golden Rock?!” and three times she confirmed it. So I started walking.

One of the unfortunate things about Kyaiktiyo is that it has a decoy Golden Rock–I guess because you can’t actually see the real one from the town so they want to signal that this is the town that is home to it. So given that I was just pointed in a general direction by the hotel staff, I looked in that direction and spotted the decoy, thinking it was the real deal (it was far enough away that you couldn’t really tell whether there were people around). It took me a good 30 minutes just to get to the base of the path and once I did, it looked well-trodden and moreover, two people along the way pointed out the path so I thought I was on the right track.

A hotel right by the initial path and the path (you can see the decoy out in the distance near the top of the hill, to the right): 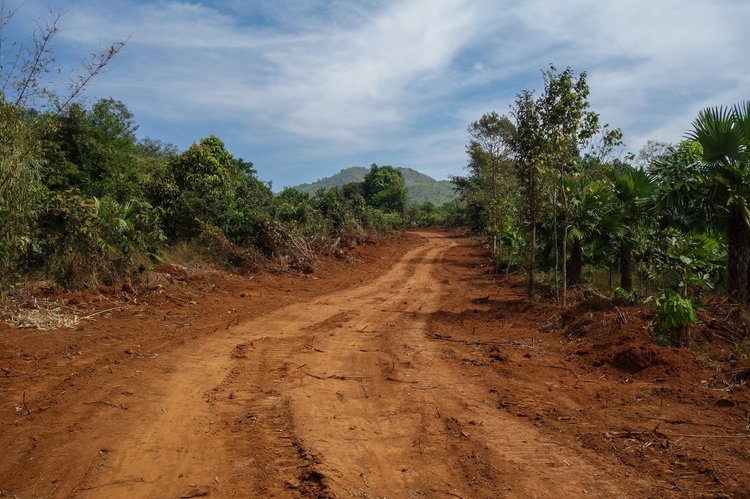 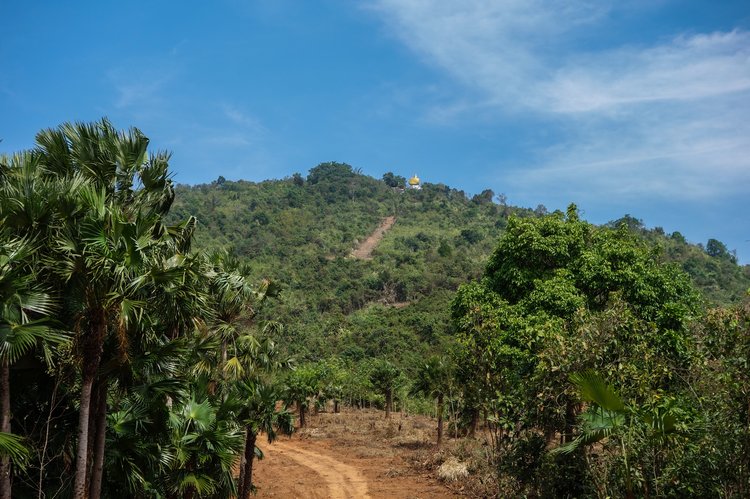 The path got crazy steep all of a sudden, and I started to wonder how on earth anyone who isn’t physically fit could make it up that path. But then I figured that perhaps this was just the most direct route up but that there is a meandering path along the back, so I kept pushing forward. After one hell of a lot of effort, I finally made it to the top, only to discover that I had only reached the decoy Golden Rock: 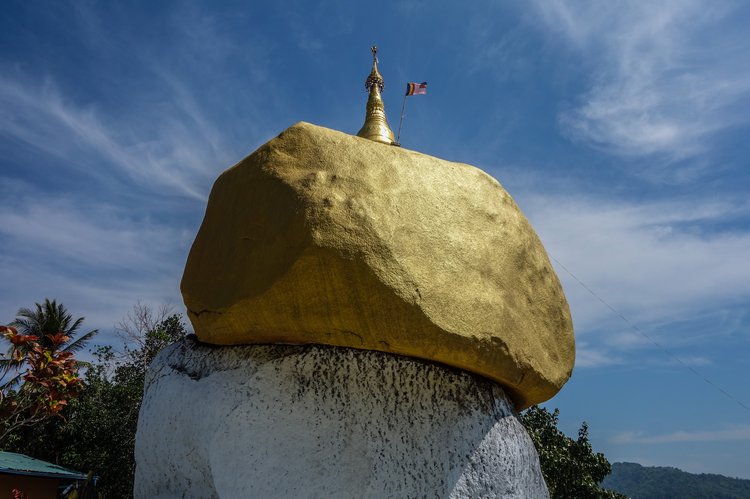 Two hours pass and I keep asking people and they keep confidently pointing me in the correct direction. But it is only at the two hour mark that someone bothers to tell me that the Golden Rock is another two hour walk away. Turns out that from the decoy Golden Rock, the real one is over 10 km away, climbing 700 vertical metres no less, so it’s not at all an easy climb. Now, I’m no professional-direction giver, but if a tourist wanted directions somewhere, and his destination was a four hour walk away, I think I would have probably mentioned that fact. However, given that I was mid-way at this point, I had no choice but to press forward. Let me tell you, that was one hell of a brutal walk.

A photo of me before being realizing the length of the walk ahead of me, look at that innocent blissful smile: 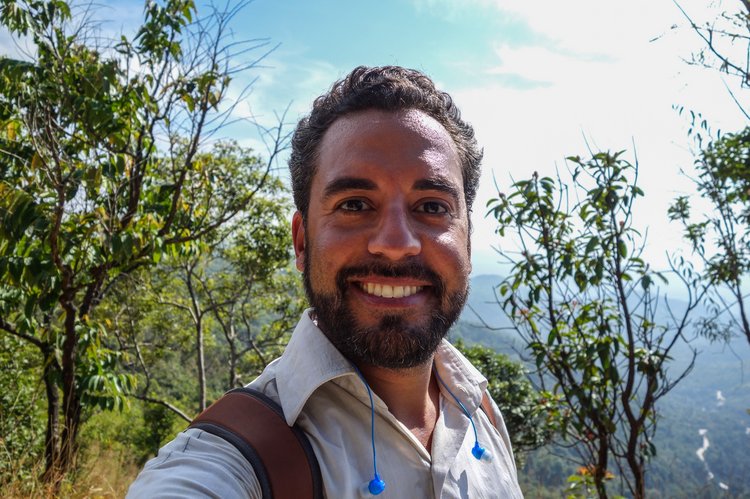 Roughly 4.5 hours after I set off from the hotel, and 2.5 litres of water later, I finally made it to the Golden Rock. I swear that in the entire time I was climbing, I did not see a single person, tourist or local making the climb. I saw one pair of tourists and plenty of locals going down, but no one was stupid enough to try the climb up.

Th Golden Rock is covered in real gold leaf. Men are permitted to go onto the small terrace to the rear of it, and they have little pieces of paper with tiny amounts of gold leaf that they attach to the rock. Women are not permitted in there. I felt bad about that, but I still wanted to check out the terrace so my compromise position was to go in there but not touch the Golden Rock. Yay, half-measures!

One of the really cool things about being there is that if you stand directly under the rock in a slight breeze, some portions of gold leaf that were not fully affixed come off and trickle down–the effect is magical real gold snow.

Two final shots of the rock, and one shot of some workers transporting bamboo support beams up the hill: 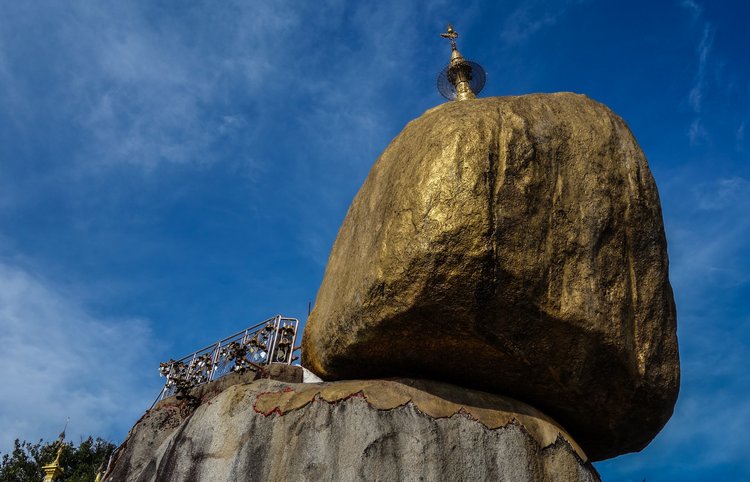 Once at the top I discovered that there is indeed a bus that takes you up and down to the Golden Rock in 30 minutes, for $2 CDN each way, sigh. Let’s just say that I was not a happy camper when I made it back to the hotel but at least I only had to do the walk one-way.

When it came time to make my departure to the next town from the hotel, that’s when the hotel staff screwed me over a second time. I asked them to help getting me a cab, and thirty minutes later they just unhelpfully came back and told me that there are no taxis past 5:00 pm. Clearly they did not mention that before. They also informed me that the buses in town are also very irregular at this time. They may come once an hour, or perhaps once every 3-4 hours. And not only that, the bus station is closed so you have to hail them from the street, and of course the buses are not labeled so you have to hail every single bus until you find the correct one. I am baffled as to why they did not mention any of this in my previous conversation. This was the only time I screamed at anyone in Myanmar and I made sure that I had a translator when I did. Let’s just say that my scathing Trip Advisor review will hopefully deter some people from staying at this place. I’m totally cool with hotel staff not speaking English (a questionable business practice but their choice), but I was so mad that they would pretend to understand and just answer yes to everything. Even when I was yelling at them, they kept saying, “Yes, yes!” which, as you would imagine, made me even angrier.

Luckily, I found someone who was heading to the next town over so I averted the taxi disaster. However, after two hours of unsuccessfully trying to find the correct bus, I decided that if I waited any longer it would kill my only day at the next town so it was worth it to bite the bullet and hire the driver to take me the whole way. So due to the hotel staff in Kyaiktiyo, not only did I unnecessarily walk 10 km uphill, but a trip to my next destination that should have cost $10 CDN, ended up costing me closer to $70 CDN. They also managed to affect my day at the next town because my feet were totally destroyed from the unexpected hike (i.e. I would have worn my proper hiking shoes had I known).

One thought on “Kyaiktiyo”