The cab driver to Patan had highly recommended the nearby city of Bhaktapur. Sure enough it was one of the cities that I had flagged because it is said to be the best preserved medieval city in the country.

Since the city is about an hour away from Kathmandu, this time I planned to take a local bus to save money. The catch being that the bus stop for the buses headed out to this city is in a random spot that is too far to get to on foot. As such, I planned to take a taxi to the bus stop which would likely cost far more than the bus ride. However, once I talked to the taxi driver, he offered to take me to Bhaktapur, wait for me for 2.5 hours and drive me back for about $24 CDN which is definitely worth the more efficient approach.

In the town I was able to secure a guide for an additional $6 CDN which also allowed for seeing the major sights efficiently in the short-time frame allotted. And frankly, I’m glad that I did not stay much longer.

The town is able to be as well preserved as it is because they actually charge tourists $18 CDN just to enter the city. The ironic thing is that while they invest quite a bit of money in the upkeep of the city, this is the only town that I’ve been to in Nepal where their Durbar square is NOT closed off to traffic. This makes it pretty much impossible to take a leisurely walk around the square because mopeds and cars are constantly honking their horns at you. In fact of their three major squares only one of them is closed off to traffic and that is only because the square is used for a local trade that makes the passing of traffic impossible. This was also the only place that I’ve been to in Nepal where the locals kept harassing me to sell me things or even straight-up beg very aggressively.

To the photos. Here is the entrance to the city: 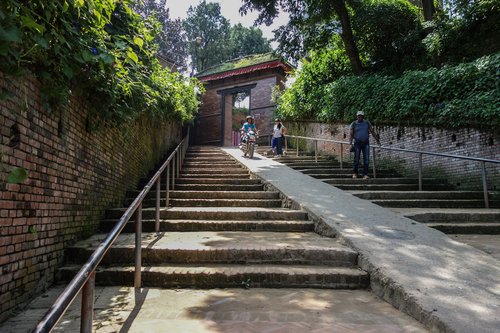 From there it is a short walk to the Durbar square:

The second square has one of the tallest temples in the country: 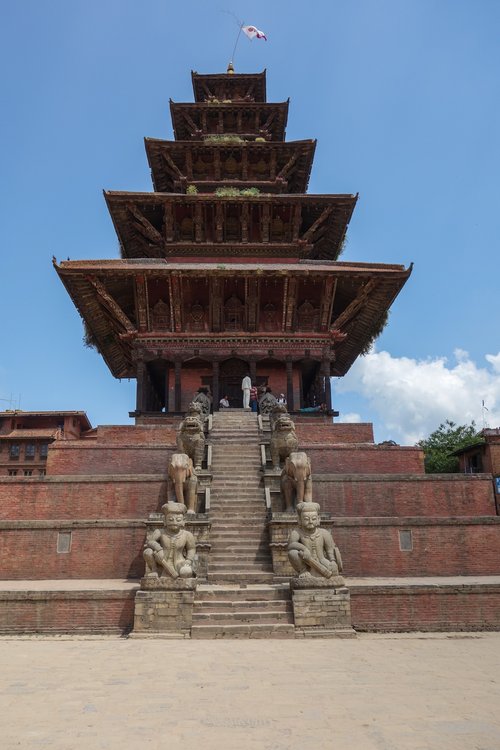 What I found rather impressive in the shot below is that somehow a private citizen managed to turn an old historic building into a cafe.

Unfortunately Bhaktapur was also severely affected by the earthquake. 340 people died in the earthquake and many of the temples collapsed, albeit they had been rebuilt in the 1930’s. The picture next to the steps leading nowhere shows what was there before:

I popped up to a cafe for lunch (you can see the Namaste Cafe in the photo below my selfie above, to the left of the picture). It allowed for a picture from a higher perspective:

A tasty lunch of fried daal and rice: 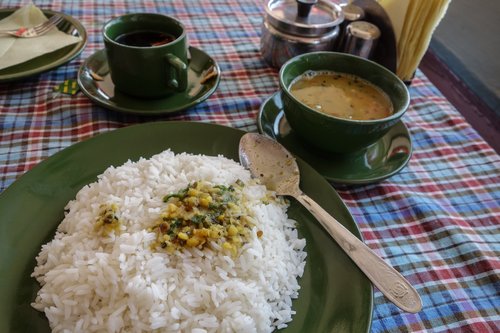 After lunch I checked out the third major square. As I mentioned above, it is actively used for making clay arts crafts. In this photograph, the woman is gathering and cleaning hay to heat the kiln:

This is the potter’s wheel: 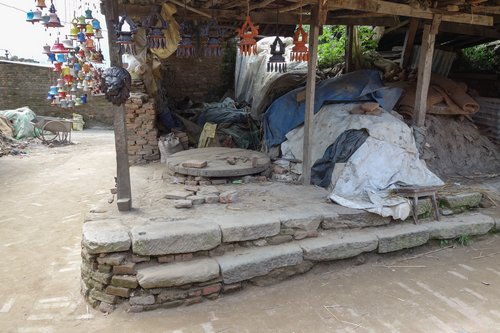 This mess that looks like a shed full of ash is the kiln. Apparently it takes 2-3 days to fire up the handicrafts:

After lunch and checking out the major squares I had about an hour to check out the streets around the square: 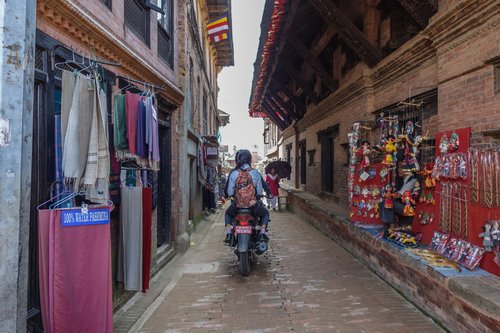 A neat thing about Nepal is that they have little shelters all over the cities that are designed for people to rest, in particular for people coming in from the countryside with no money, to pray at a temple. Here is an example, the first picture shows a small temple, the next photo shows the little shelter: 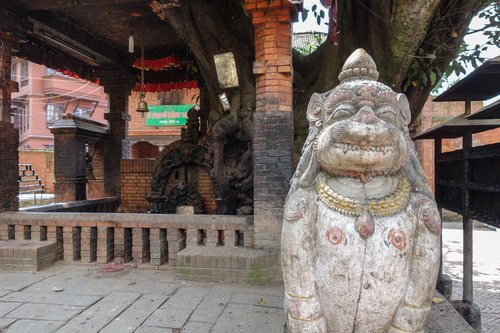 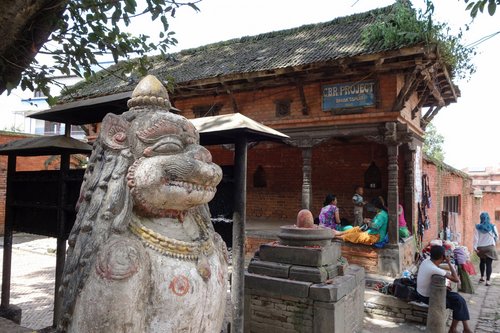 As a side note, this cute little temple appears to have been built around a 300 year old tree: 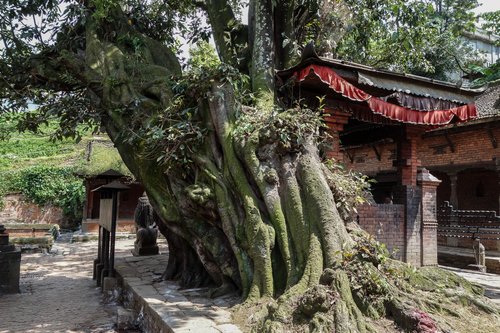 I finished up my time in the city trying the specialty dessert of the city, King Curd, which is essentially a type of yogurt. It has these chunks of what appear to be crust of the yogurt which add a little texture and are sweeter than the rest. The dessert as a whole has a nice velvety texture with a slight hint of vanilla.

Once we were back in Kathmandu, I checked out a nice little coffee place while I processed some photos. The place is called Himalayan Java:

I then went on a final tour of my favourite restaurants in the city, starting with a final dinner at OR2K. Here’s what the place looks like from the outside, not at all impressive:

And here’s what it looks like from the inside: 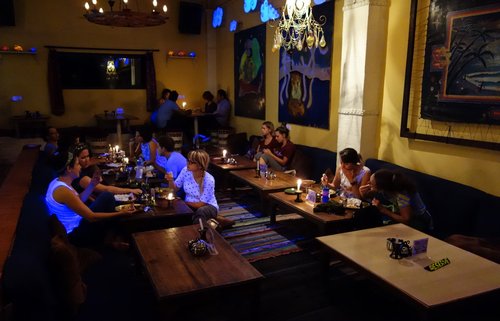 And some tasty Dal Bhat: 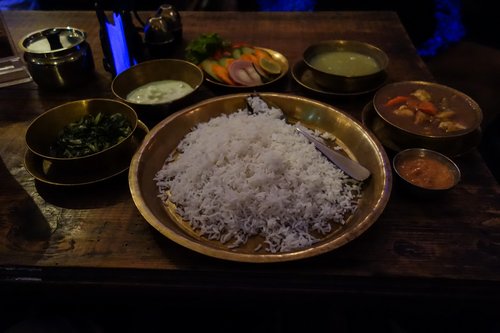 Washed down with a mint lemonade, where they grind the mint down almost into a paste so you really get a minty drink:

The after picture, fully indulging my inner hippie, shoes off sitting on a cushion: 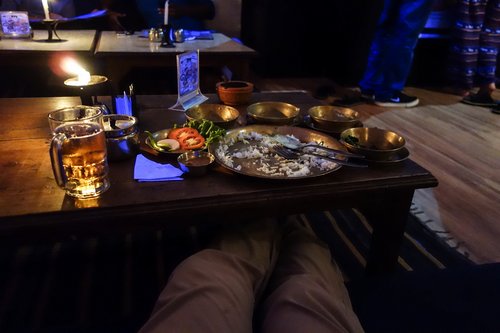 I finished my night off at the great Phat Khat, and this time I took proper pictures of the place and my friendly servers: 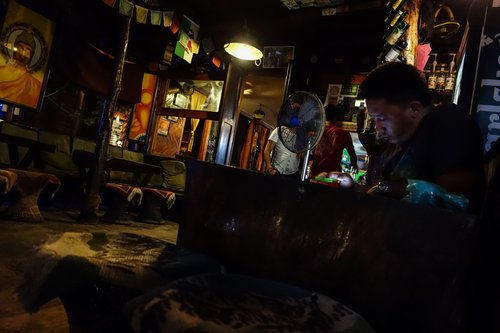 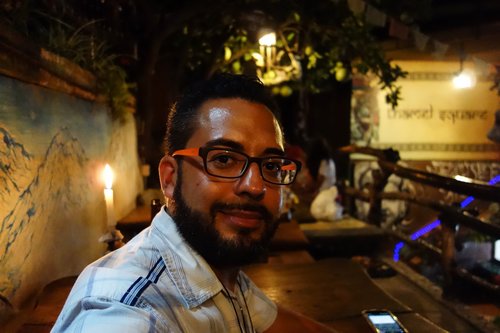 One thought on “Bhaktapur”