Once I was back in Kathmandu, my destination for the following day was the nearby city of Patan, often referred to as the sister city of Kathmandu. And for good reason, the city really is quite similar to Kathmandu, just a slightly smaller and mellower version. Of my day trips from Kathmandu, this was my favourite city. The main attraction is the Golden Temple.

The city is very close to Kathmandu, so close in fact that if you weren’t paying attention you wouldn’t realize that you left Kathmandu and entered another city. In fact I was paying attention and had to be told when we arrived.

I went there by taxi, which ran me 700 Nepalese Rupees or $8.70 CDN for the 20 minute trip. Essentially the only dividing point between Kathmandu and Patan is a river, but it’s pretty much dense urban buildings all the way between the two cities.

I had the crazy coincidence of going on September 5 which this year coincides with Lord Krishna’s birthday so the streets were busy in a fun way. To explain, initially I thought it kind of odd for a god to have a birthday, but upon further inquiry I learned that Krishna is considered to be the human incarnation of Bishnu so it’s pretty much like Christmas.

As I mentioned earlier, my main objective in going to Patan was to check out the Golden Temple which is an awesome Buddhist temple in the middle of the city. Words and photos really cannot communicate the experience of walking into the courtyard hiding the temple. You walk in through an unimposing entrance into a small dark corridor. Then, when you come through that corridor, you end up in a very small courtyard housing an absolutely massive golden temple. I found that filming it really shows the experience best, unfortunately the video is quite large so I have to find a stable wifi connection for the better part of two hours to be able to upload the movie which I fully intend to do. In the meantime, here are some inadequate photos. 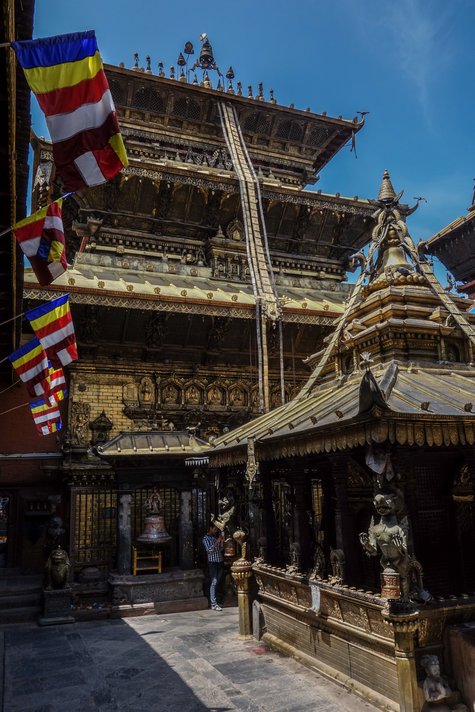 These are some spinning prayer wheels, the idea being that they have a mantra written on them in sanskrit, and if you spin the wheel it is supposed to be the equivalent of chanting the mantra. It feels totally disrespectful and sacrilegious but it is expected, nay encouraged, for people to walk along spinning all of them like a child at play:

The amazing thing about these temples is the crazy attention to detail. If you go up close to any of these temples and the surrounding courtyards there are extremely detailed carvings all over the place, sometimes cast in metals. Examples: 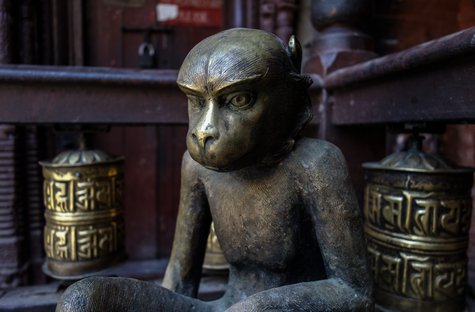 As a side note, the Golden Temple had a cute little day care tucked in behind. How much would hipster parents pay to have their kids right next to a famous cultural icon back home?

After visiting the Golden Temple, I made my way down some crowded streets towards Patan’s Durbar Square. Remember how I mentioned that there are no post offices on the streets? This enterprising postcard vendor created his own: 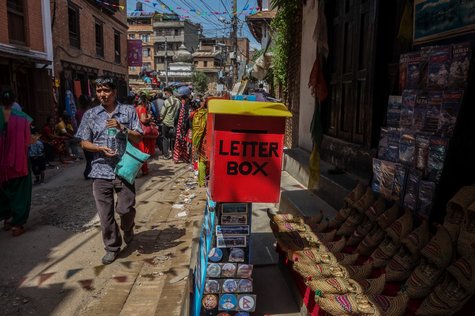 The city streets of Patan are really neat. I like Kathmandu, but the streets in Patan have a similar level of culture but just minus the crazy intensity of the capital: 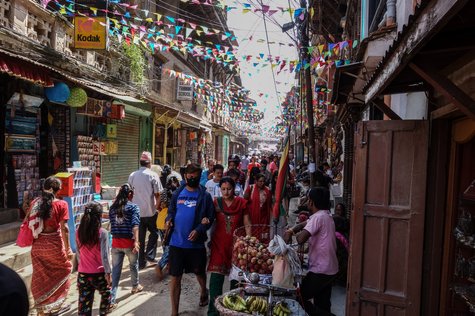 Certainly doesn’t hurt that the the city is all prettied up for the festival.

The following sight cracked me up but certainly says a lot about the Nepalese/Indian relationship to their religion. They certainly take religion as seriously or more so as Christians in North America, but their relationship with their religion is far more familiar, quotidian and even friendly. Religion is something they live with in their daily comings and goings, not an isolated stop for an hour on Sundays. And thus, you get things like this, Hindu temple/motorcycle parking stand:

With fancy carvings no less: 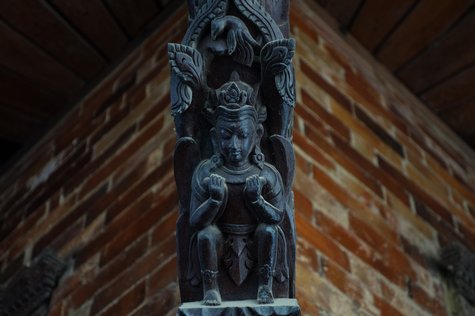 Another thing I really like about Nepal, as I’ve mentioned before is that you can walk down random alleys and run into temples or stupas like this one. This is a totally normal courtyard surrounded by private housing:

This is yet another massive temple that I ran into just randomly walking the streets: 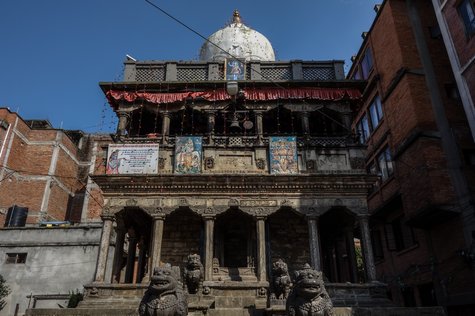 The best part about ending up in Patan on a festival day was that I kept running into clusters of singing and dancing circles as I walked by. As far as I could understand, these were professional musicians who kind of crouch down and sing their songs as passers by have a hell of a party singing and dancing, tipping the musicians along the way:

I finally made it to Durbar square which was an absolute zoo. It was a little bit difficult to really take decent shots of the various temples around the square due to the crowds, but I think the revelry added more to the shots than being able to properly frame a picture. Here is my best attempt at capturing the mayhem: 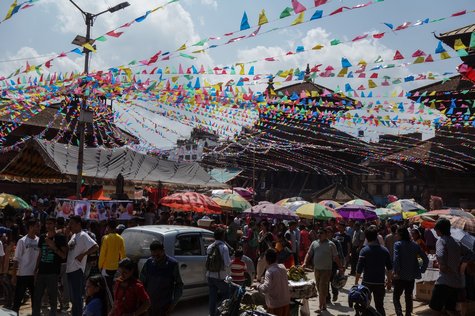 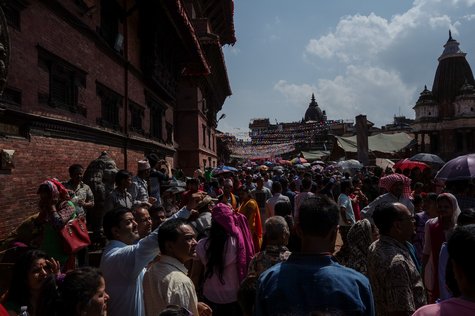 Another singing circle, this time in the square:

And in the interests of a multi-sensory experience here, this is what it sounded like: 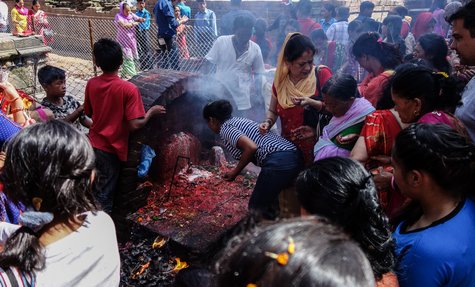 Note the child wearing what appears to be eye-liner. Initially, I thought that this was a religious thing for special occasions, but unfortunately it’s quite prevalent and rather dangerous. The paint is called kajal, kohl, or surma and parents put it on their kids because they think that it protects their eyes and perhaps even improves their eyesight. Unfortunately, the paint used has been known to contain high levels of lead which has lead to severe lead poisoning.

More photos in the square and its surrounding streets: 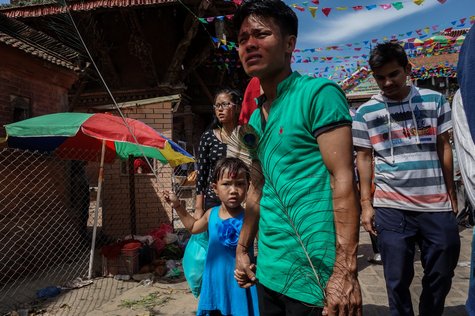 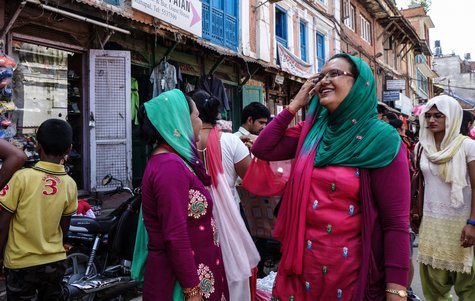 Throughout the festival I saw lots of people carrying peacock feathers and feather vendors such as these:

The significance of the feathers is that Lord Krishna is often depicted as wearing a crown made of peacock feathers. Like the bindi (tilak for men), the eye in the feather represents the third eye of Krishna and divine wisdom.

Speaking of the tilak, when in Rome … 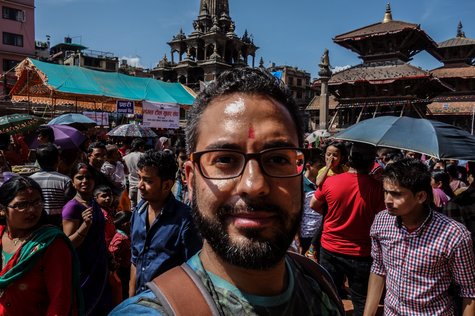 I had a nice lunch in a restaurant overlooking the square which allowed me to take a few pictures of the square from up high: 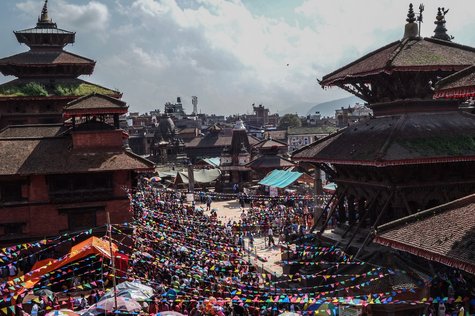 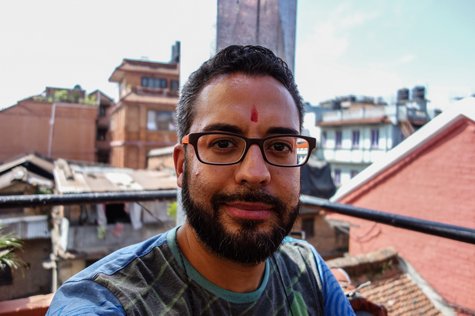 Durbar Square was the main area of focus in terms of the festivities, but for obvious reasons, the Krishna temple down the street was also quite busy. It had a neat little bathing area right outside of the courtyard where the various temples are housed: 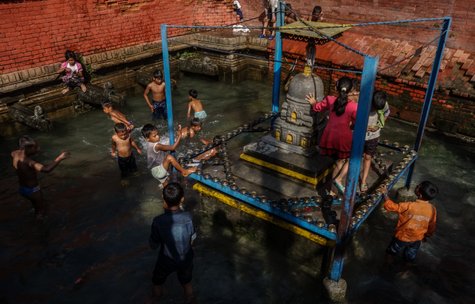 The temples here were again very impressive and the experience of walking through the corridor and walking out into that splendor cannot be captured by photos. I have recorded a video which I will upload down the road but here are my best efforts at capturing the courtyard in photos: 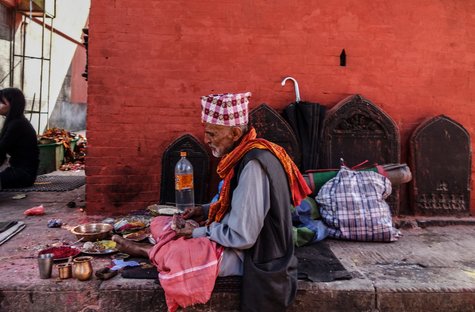 Durbar Square and the Krishna temple were very crowded as you can tell, so after some time I needed a mellower experience so I wandered the streets of Patan to see what I could discover. In so doing I ran into a huge square which was pretty much empty of people. A nice man saw that I was completely clueless and gave me a little impromptu tour of the square and explained some things. Here are some pictures from that tucked away little square: 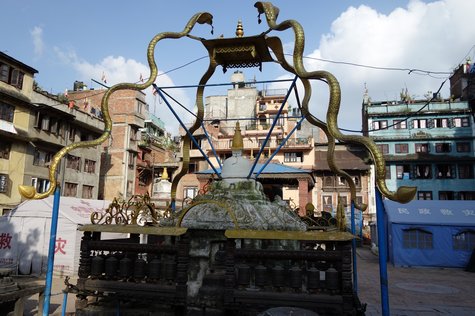 I thought that the cobras were rather violent symbols for a Buddhist stupa but the nice man explained that cobras are thought to guard water and are not intended as violent symbols but rather protective ones.

Some residential units in this square: 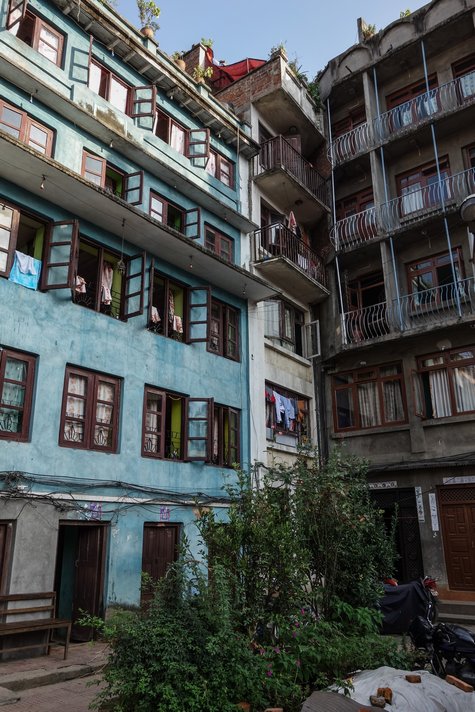 The main temple in the square: 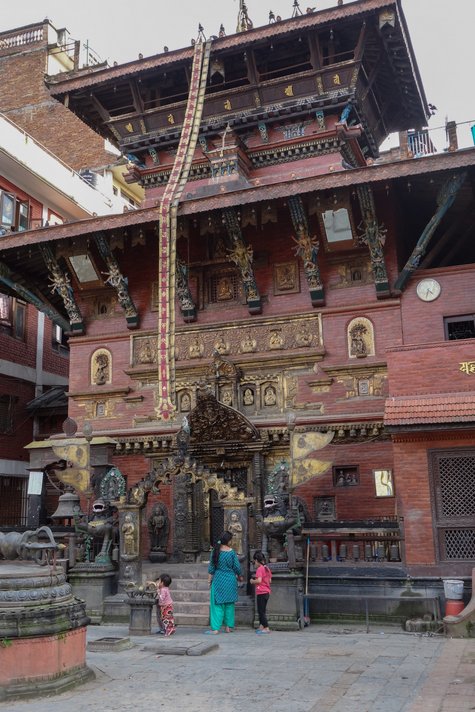 To the right in the picture is a wooden screen. Behind it is a prayer area and I happened to be in the square while a religious ceremony was underway. The sound of their prayer song was quite lovely so I recorded a little bit so that you can get the full experience:

I took a cab back to Kathmandu after that and headed to a quiet patio to process some photos. I settled on a spot in Thamel called Jatri which had some great outdoor seating:

Afterwards, I walked around the neighbourhood for a bit and by random chance ran into what has to be one of the most relaxing restaurants that I have ever been to in my life. The place is hippie central, but feels like you are having a meal in a treehouse because it’s on a second floor and they decorated it with some tree-like wooden beams. As a bonus, their Dal Bhat was absolutely brilliant. Some of these photos are long-exposure shots, 5 seconds plus, which is why they look kind of odd: 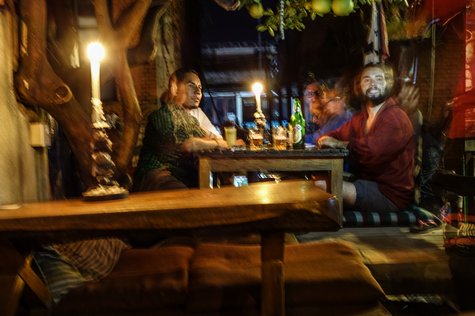 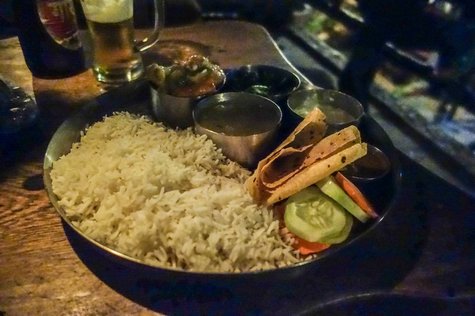 The name of the place is Phat Kath (pronounced Fat Cat) and it is so mellow that the waiters actually sit at your table when they take your order. Also, when bored, they just sit down and chat with you as if you were best friends. Those of you who know me well would guess that I would have found that horrendously annoying but these guys were so ridiculously friendly that they pulled it off with ease.

In closing, I took a picture of what the Thamel neighbourhood looks like at night:

One thought on “Patan”