I spent close to a week in Siem Reap and there is certainly enough to do around the area to fill up that time.  I would recommend a minimum of four days in the city; on top of the temples near Angkor Wat which take a minimum of two days to cover, there are at least three other temples nearby to choose from for daytrips.  In terms of accommodation, I stayed at Residence 101 east of the river that separates the town, which was an excellent hotel given the price.  The main nightlife is a 15 minute walk away west of the river, but the accommodation on that side is both more expensive and noisier—also, the best restaurants in the city happen to be east of the river a few minutes from my hotel. 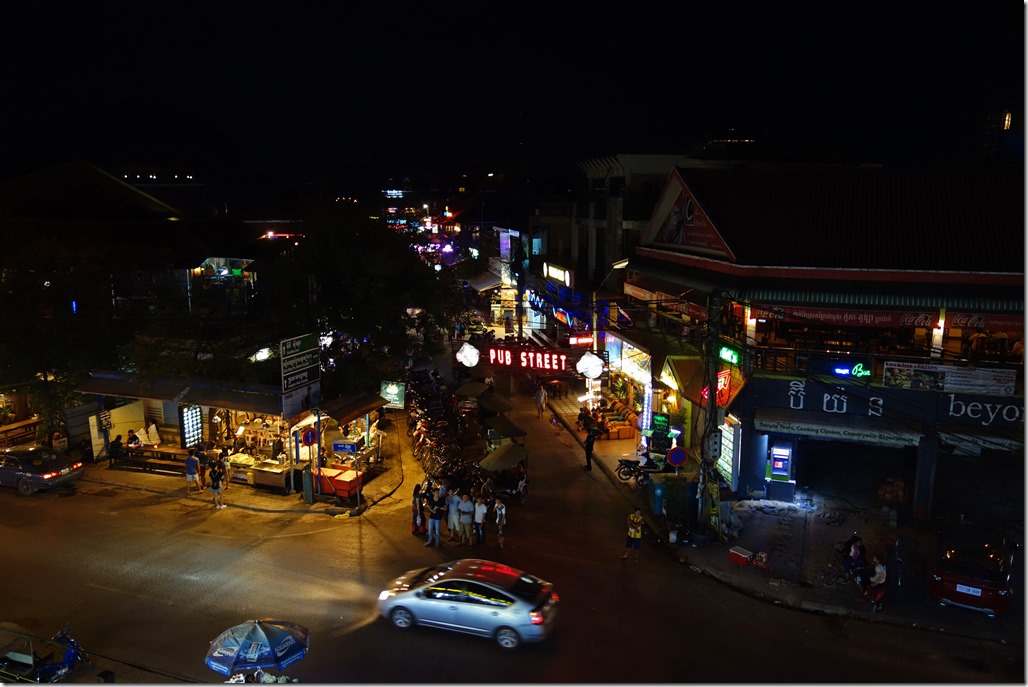 In the afternoon of my first full day in town I was lucky to meet up with a friend from high school, Josh Karton whom I hadn’t seen since graduating 19 years ago, and his wife.  They were staying at the Sojourn Boutique Villas which is known for having excellent cooking classes twice a day.  We started by making something resembling a crepe, but cooked until it got crispy.  You roll them up into cone shapes before they get too stiff.

For the appetizer we started with minced fish, added some spices and then shaped the fish around sticks of sugar cane before frying them in oil:

For the main we made a delicious Cambodian chicken curry:

It was horrendously hot during the day so after the cooking class, I went back to my hotel for a swim and a rest.  At night I met up with Josh and his wife for dinner at a nearby restaurant by the name of Cuisine Wat Damnak that does two new tasting menus once a week: 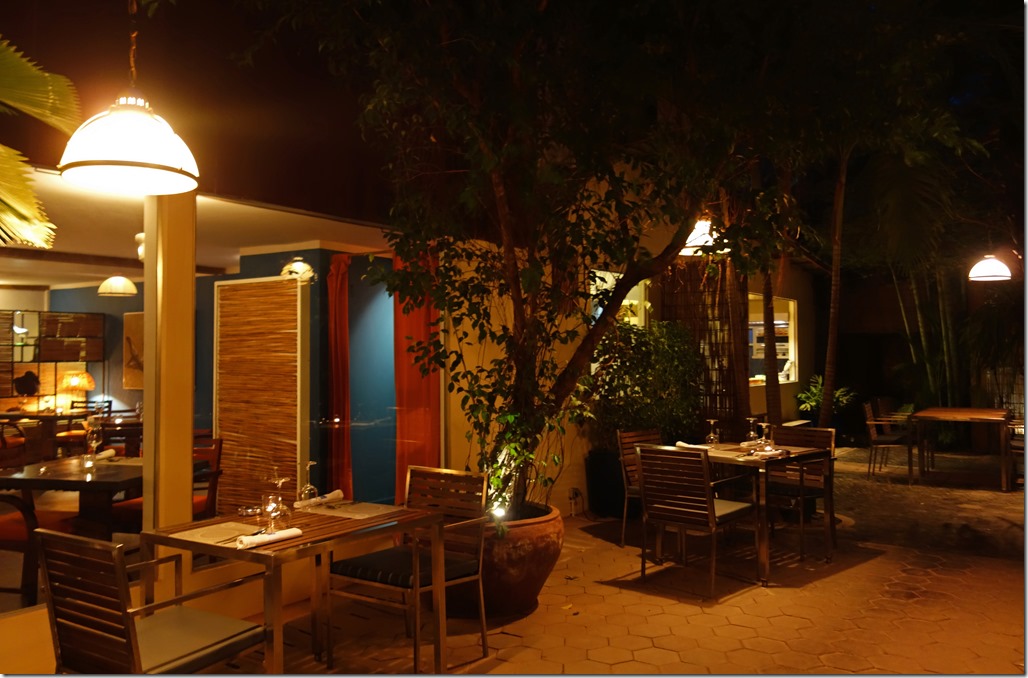 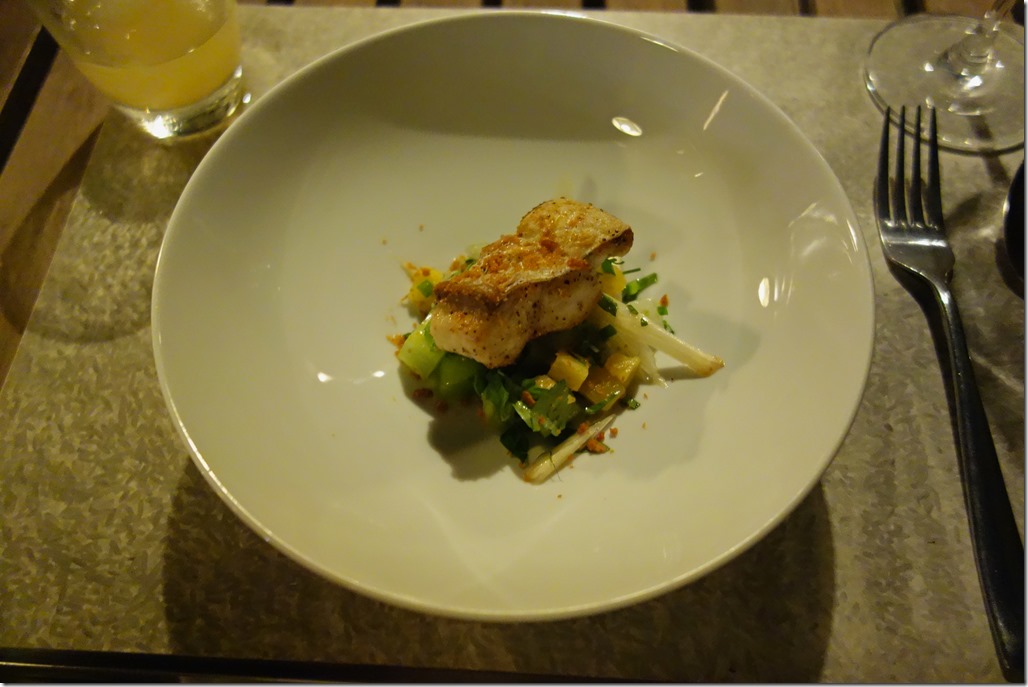 It rained for much of the following day so I wasn’t able to do too much.  After the rain I took some pictures of the flooded streets nearby: 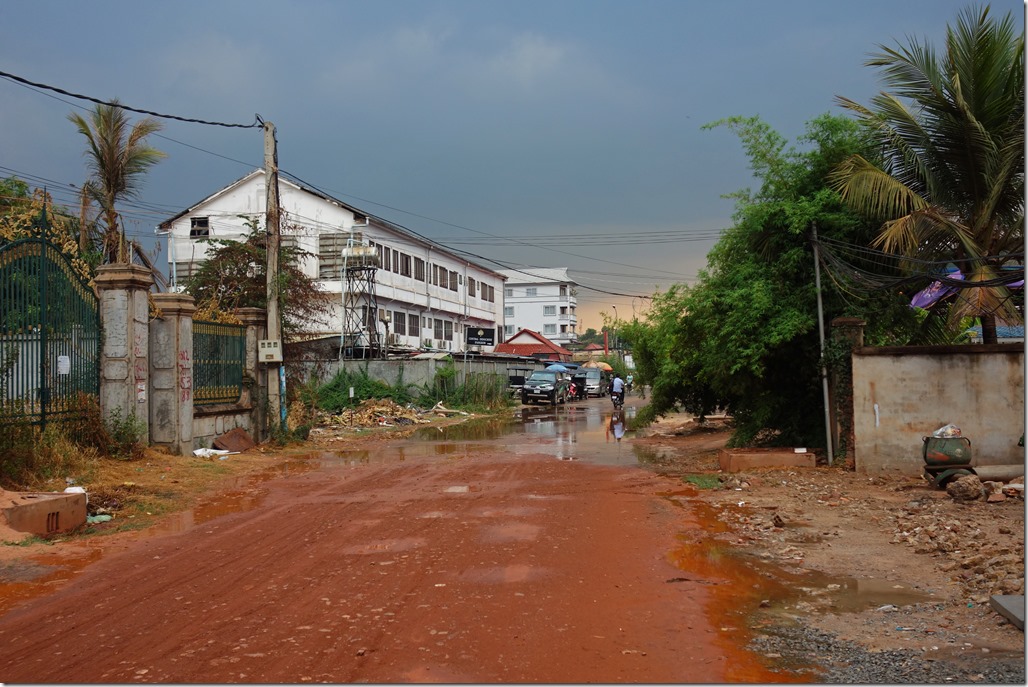 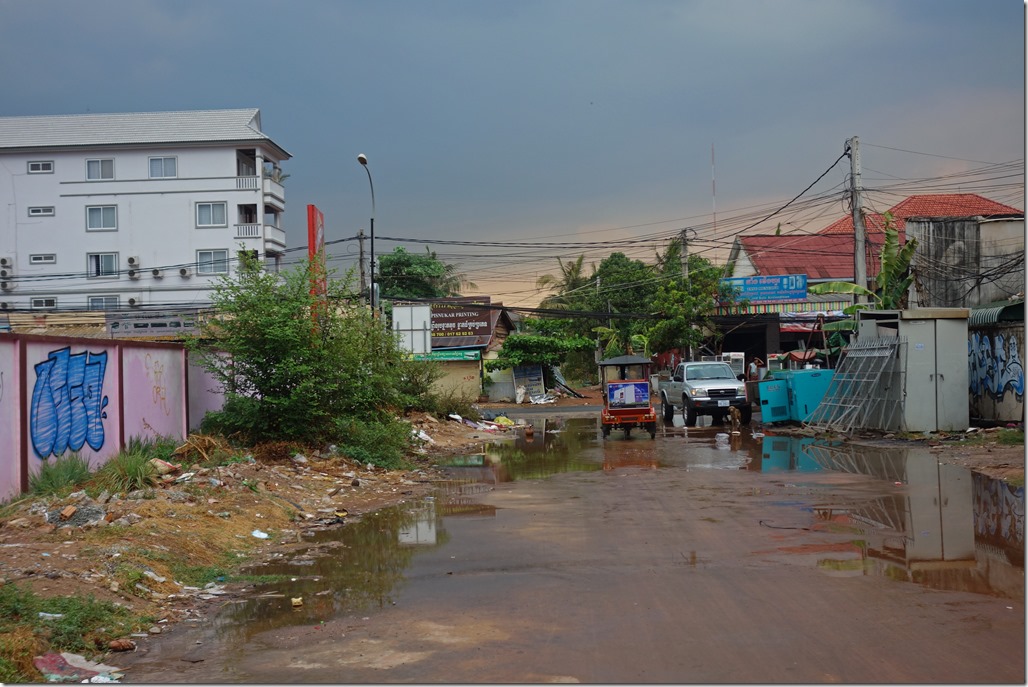 At night I ventured out to the Cambodian BBQ Restaurant, which as you would imagine makes BBQ. Below is the BBQ beef and a coconut milk soup with chicken:

During my time in Siem Reap I really liked going to a nice little bar by the name of Picasso.  They don’t really have tables so everyone just sits around a horseshoe shaped bar and gets chatty with strangers: 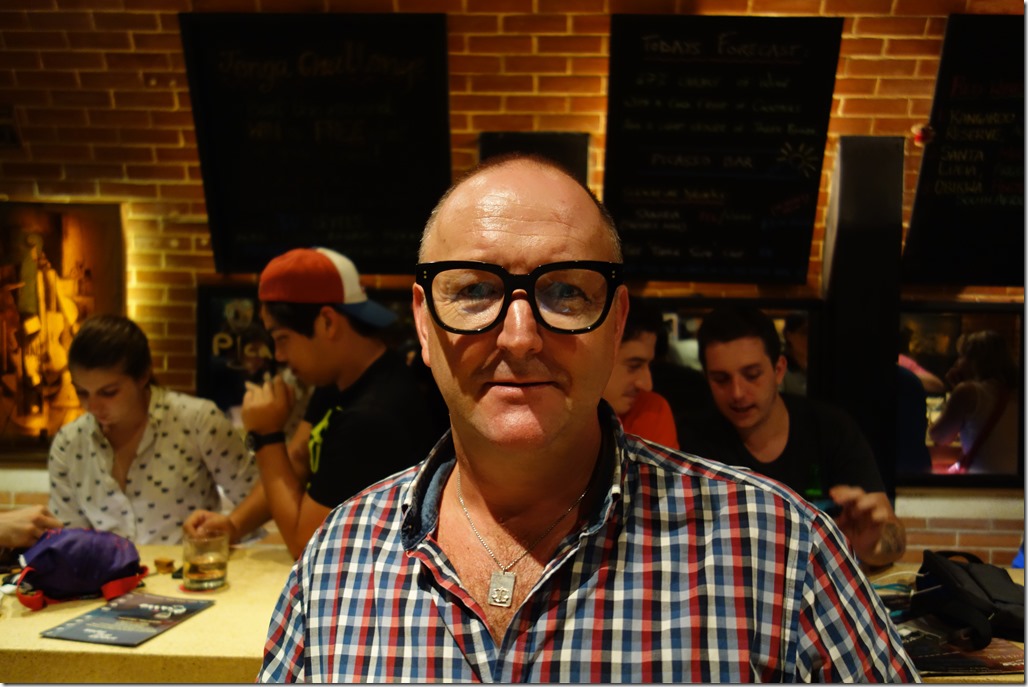 I was told that Angkor Wat is so impressive that it makes the other temples in the area look meager in comparison.  As such, I left my visit to that temple near the end of my time in the city.  My first daytrip was to Banteay Srei which included visits to two other temple complexes.  I will confess that the additional sites came as a surprise so I never caught their name.  The other temples: 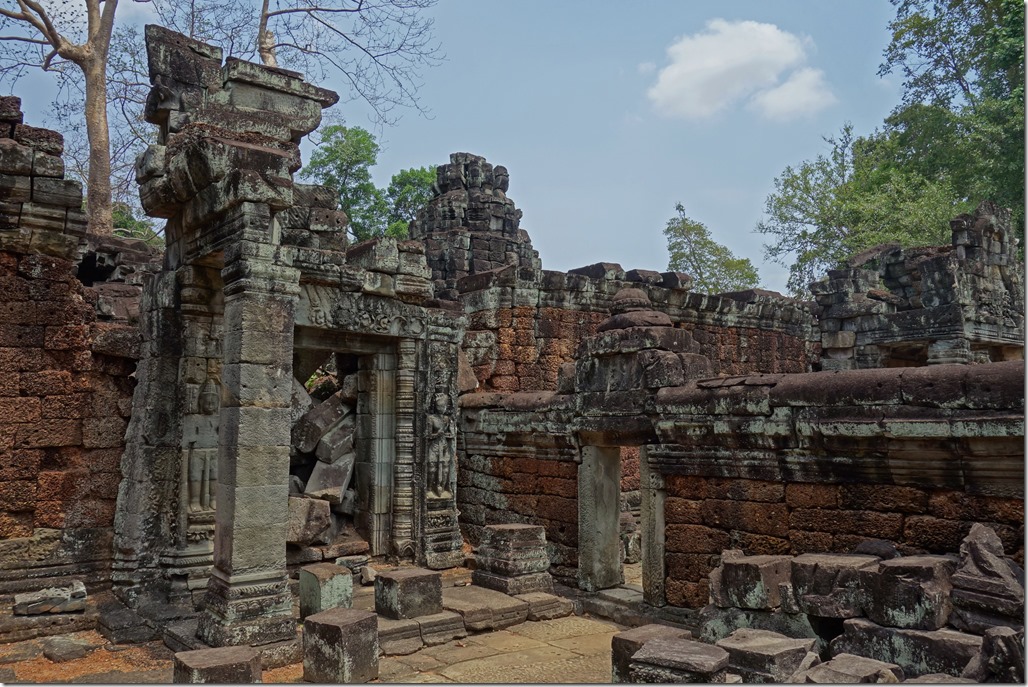 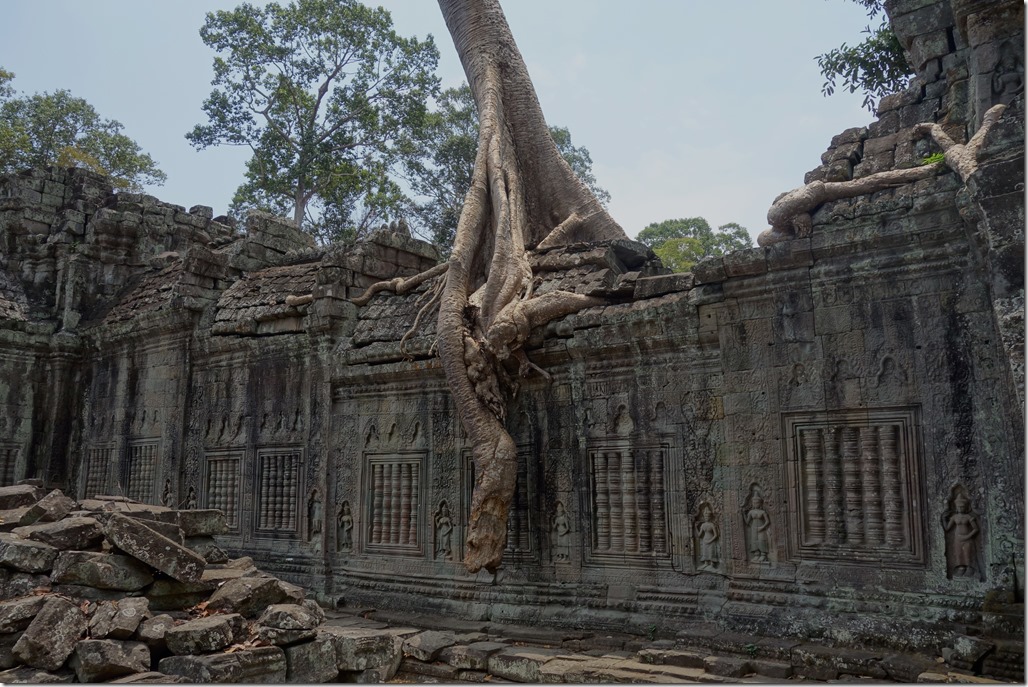 Bantaey Srei is surprisingly small compared to the other temple complexes around, but it is by far the most elaborate and unique given the use of the pinkish (I say orange) sandstone.  It is a Hindu temple dating back to 967 CE, dedicated to Shiva: 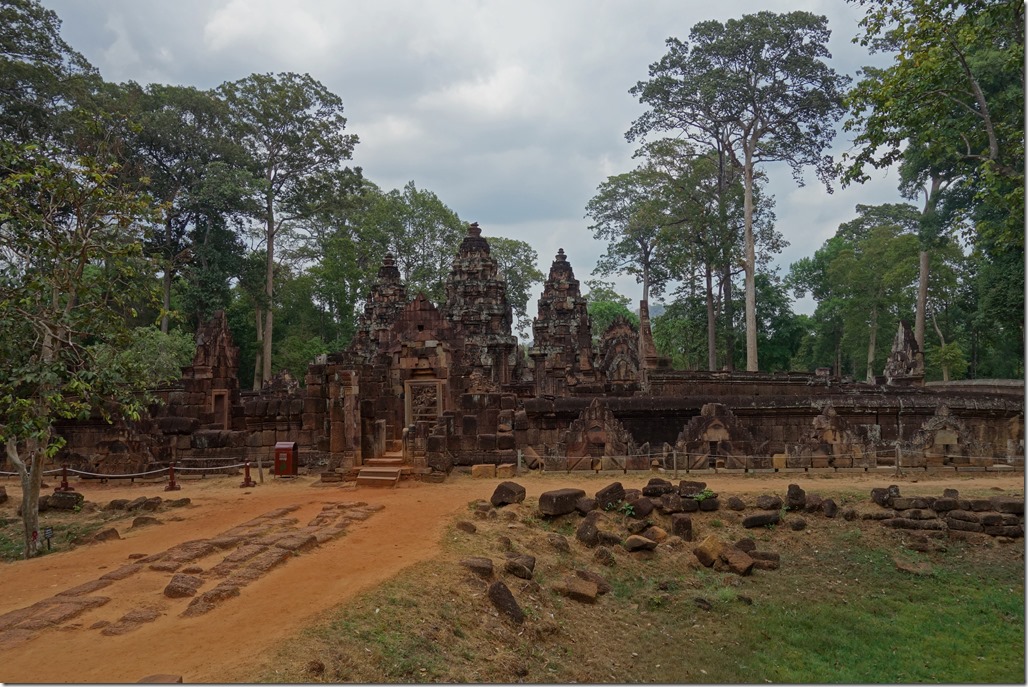 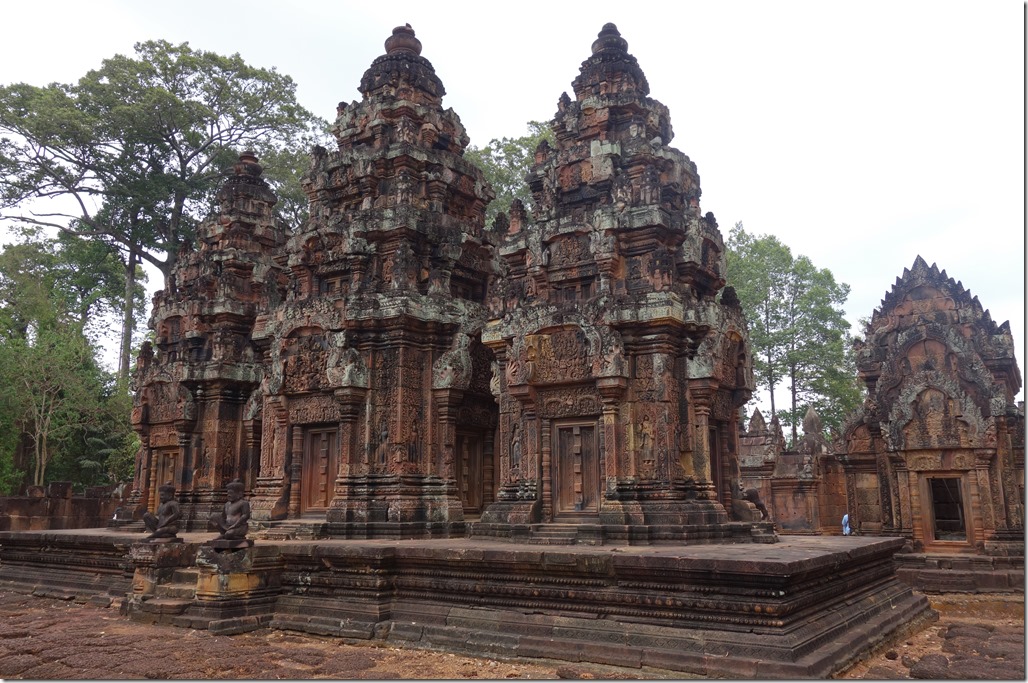 For dinner that night I walked across the street from my hotel to the magnificent Georges Rhumerie.  They specialize in French dishes with a Cambodian twist, and they make their own jams, condiments and infused rice wines:

I only order dessert if a restaurant is very good.  Their homemade ice cream was terrific, served with a rice wine that you pour over the ice cream:

Four days into my time in Siem Reap I finally made it out to Angkor Wat.  I received some conflicting reports as to whether or not you can bring gas powered scooters into the historical zone, so I went with an electric scooter.  I actually prefer electric scooters as they are quiet, accelerate smoothly and have an excellent range.  The only downside is that whereas gas stations are easy to find, if you run out of juice you’ll be stuck somewhere for a while even assuming you find an outlet.  My electric scooter gave me no problems.  There are a LOT of temples spread far apart around the area so you should definitely rent a scooter.

My first stop was Angkor Wat.  You can buy tickets for one day, three days or one week.  They are purchased at ticket office nowhere near the entrance to the historical site so ask for the location ahead of time.  I’ve got to say, while Angkor Wat, being the largest religious site in the world, was impressive because of the scope, I didn’t find it nearly as interesting as the smaller temples nearby: 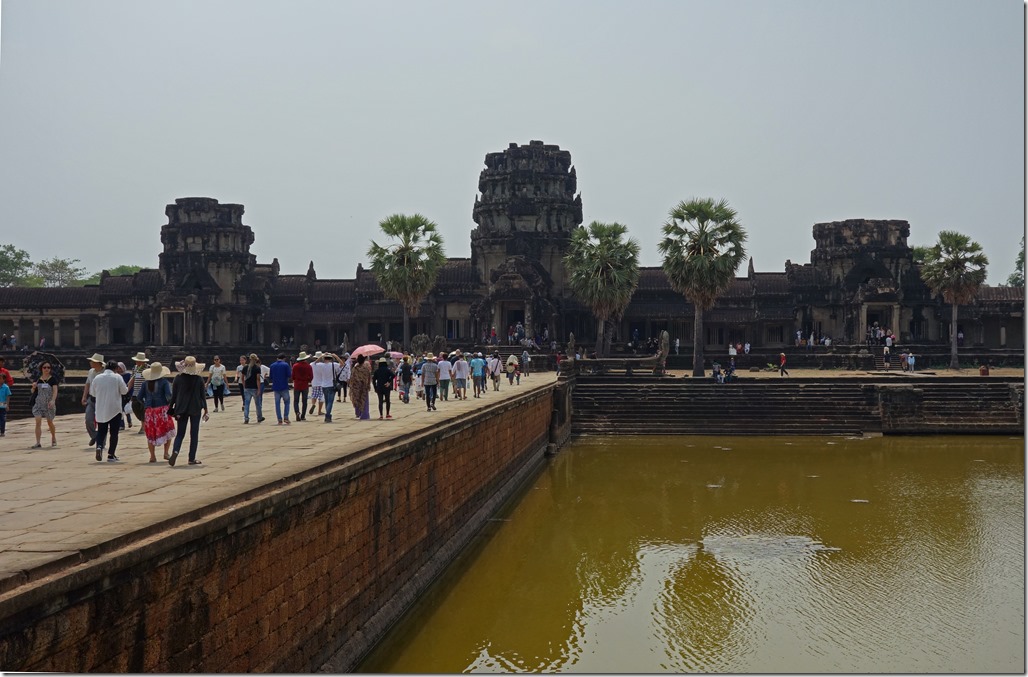 My favourite temple complex was Ta Prohm.  For one it was far quieter and cooler in the hot weather than Angkor Wat.  The temple was built in 1186 as a Buddist temple and was subsequently abandoned for many years.  The enormous trees and roots sprawling over the temple make this an amazing sight: 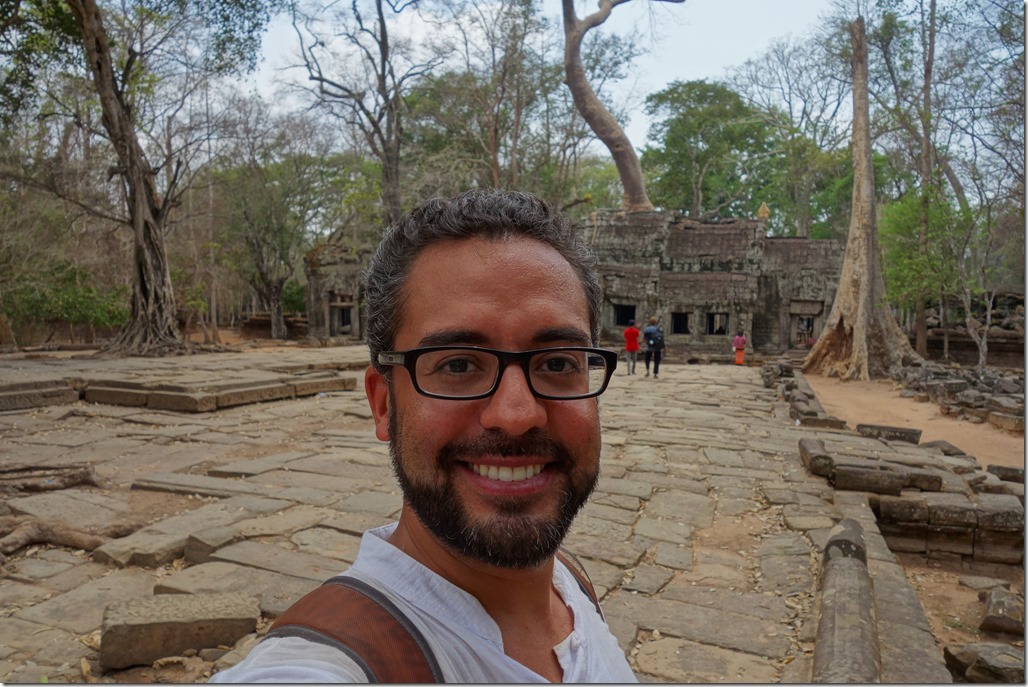 Check out how the tree has grown right over the small statue: 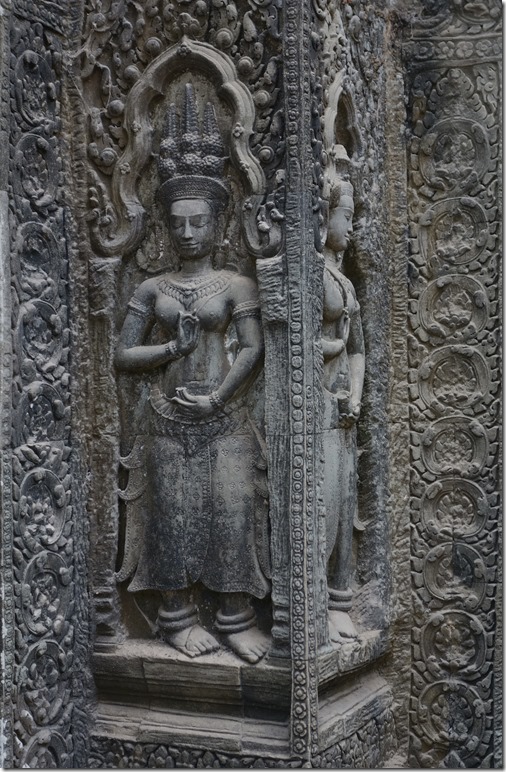 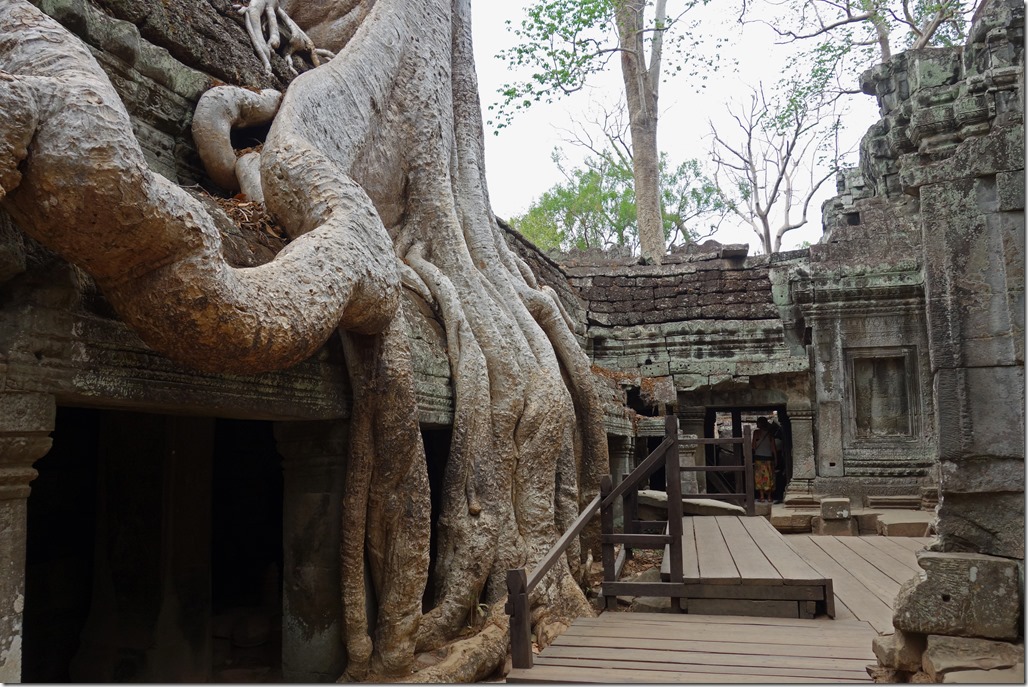 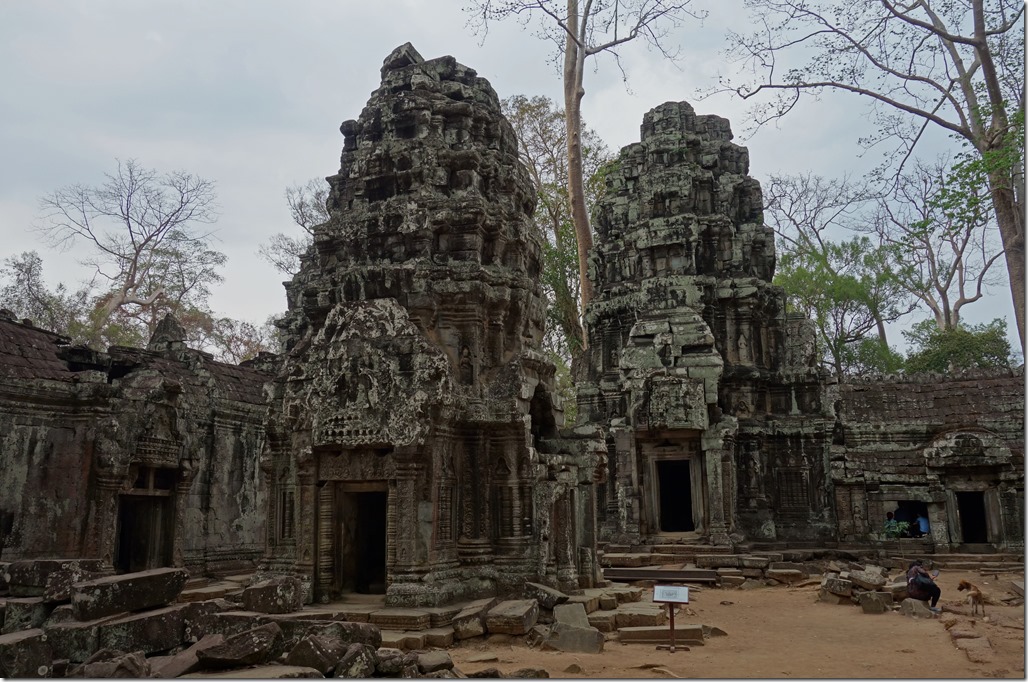 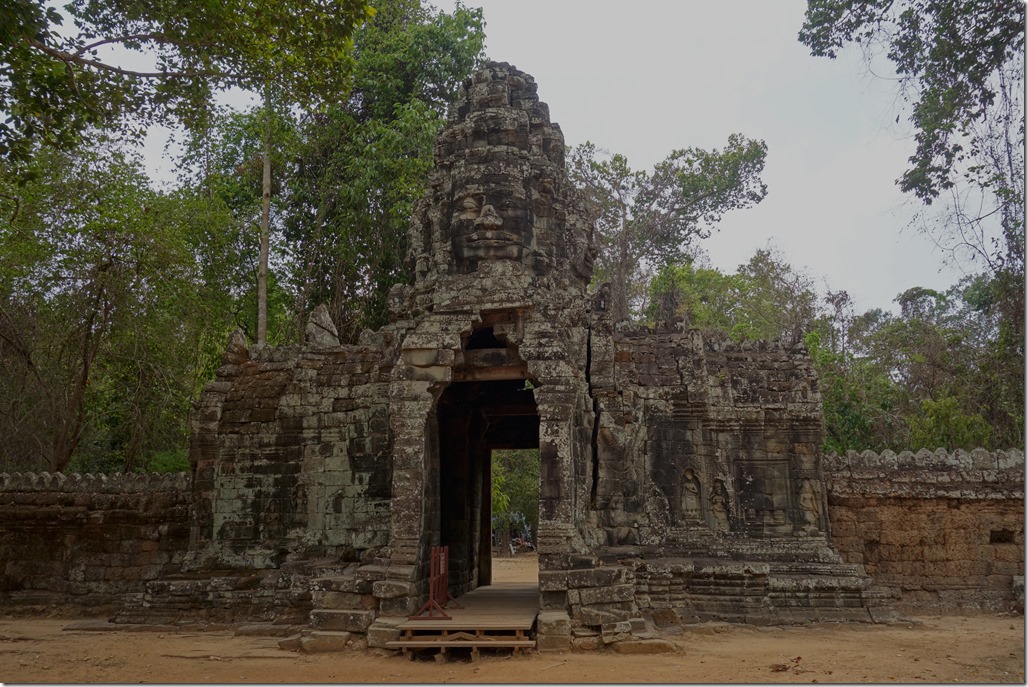 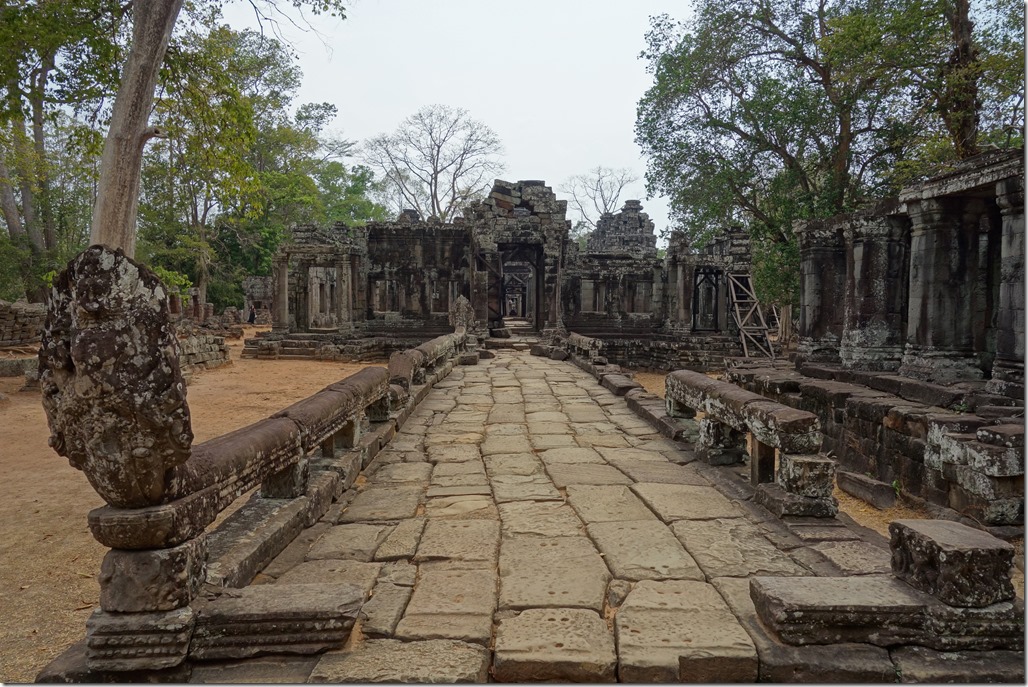 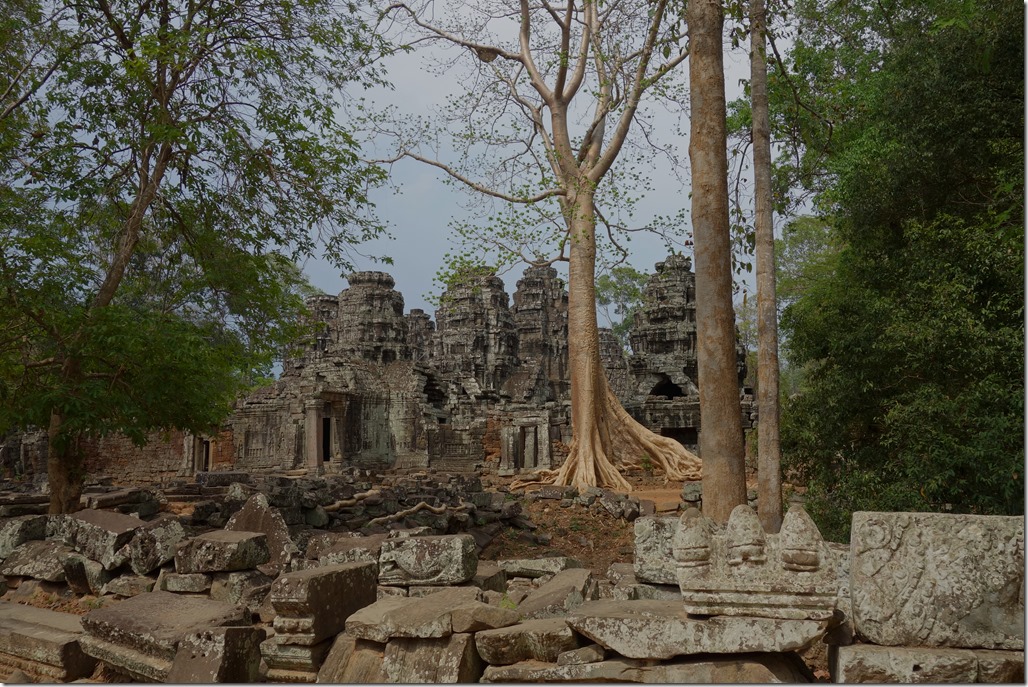 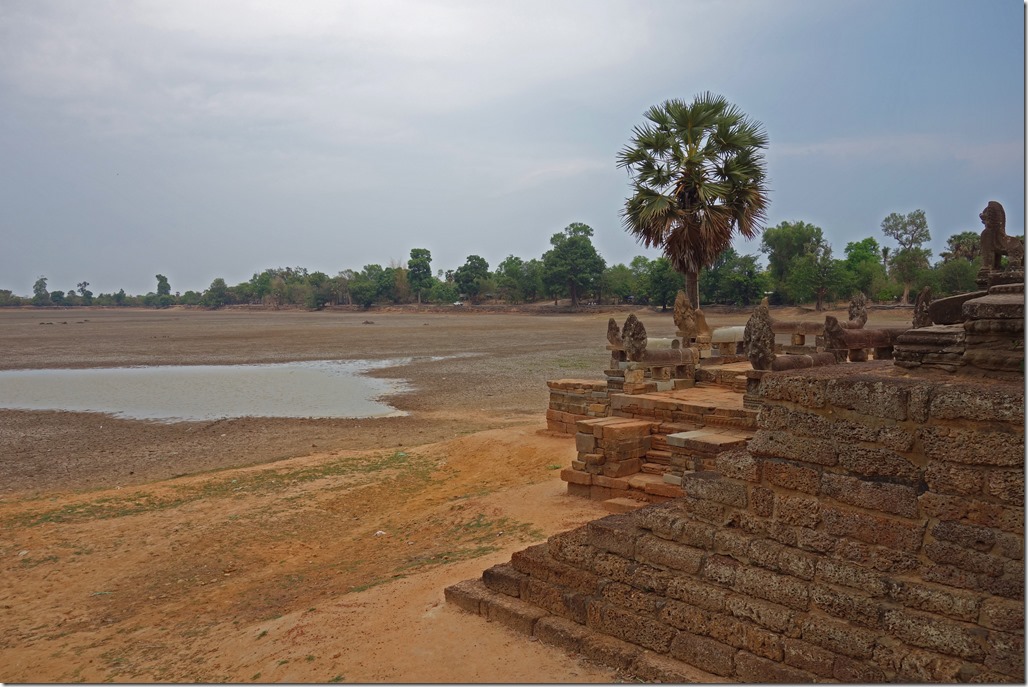 The Buddhist temple at Banyon is another popular complex.  It is known for the many towers with four sides, all bearing the face of Avalokiteshvara: 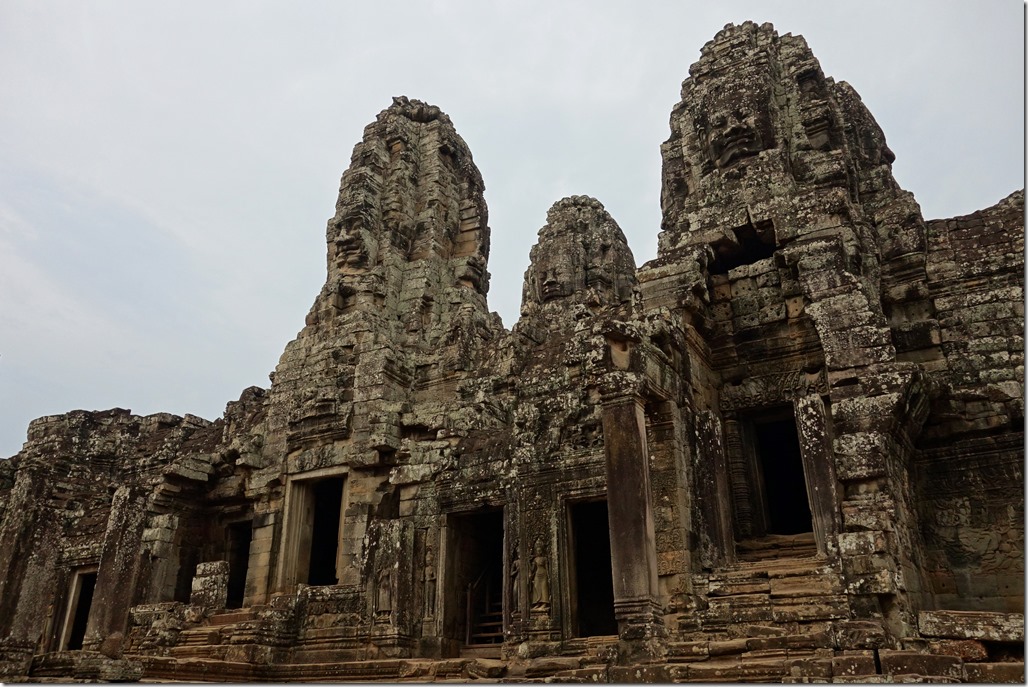 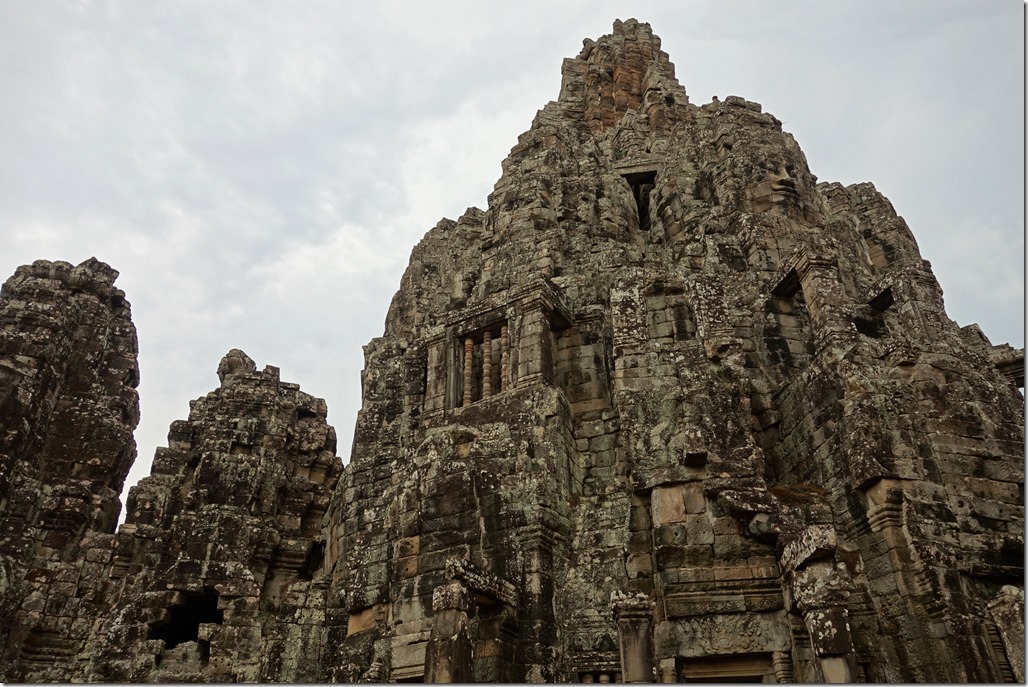 Shots from the area surrounding Banyon: 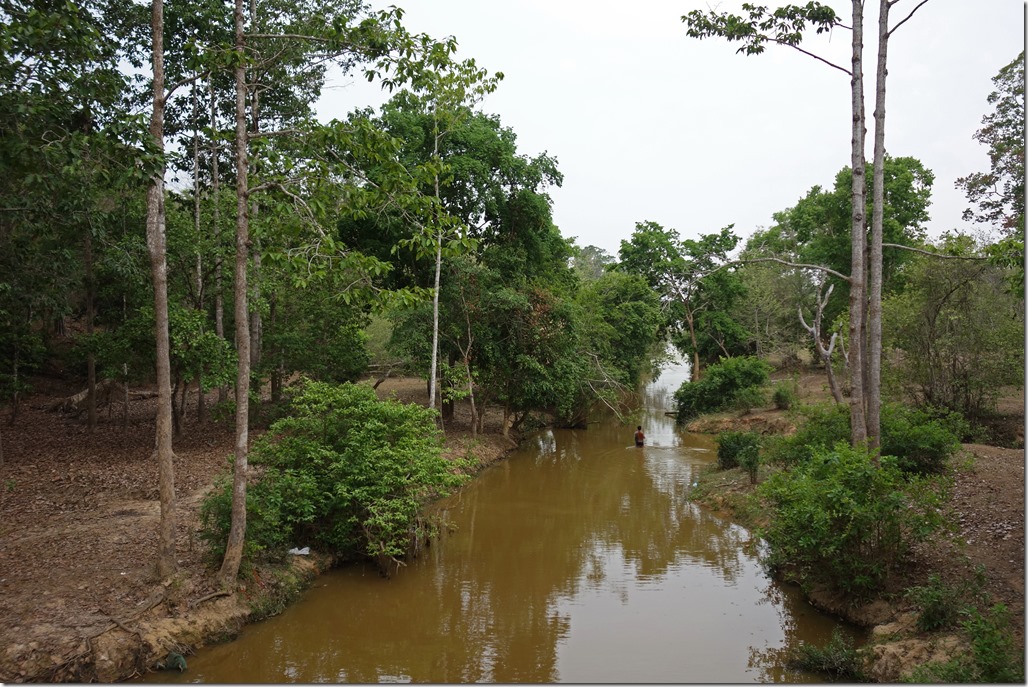 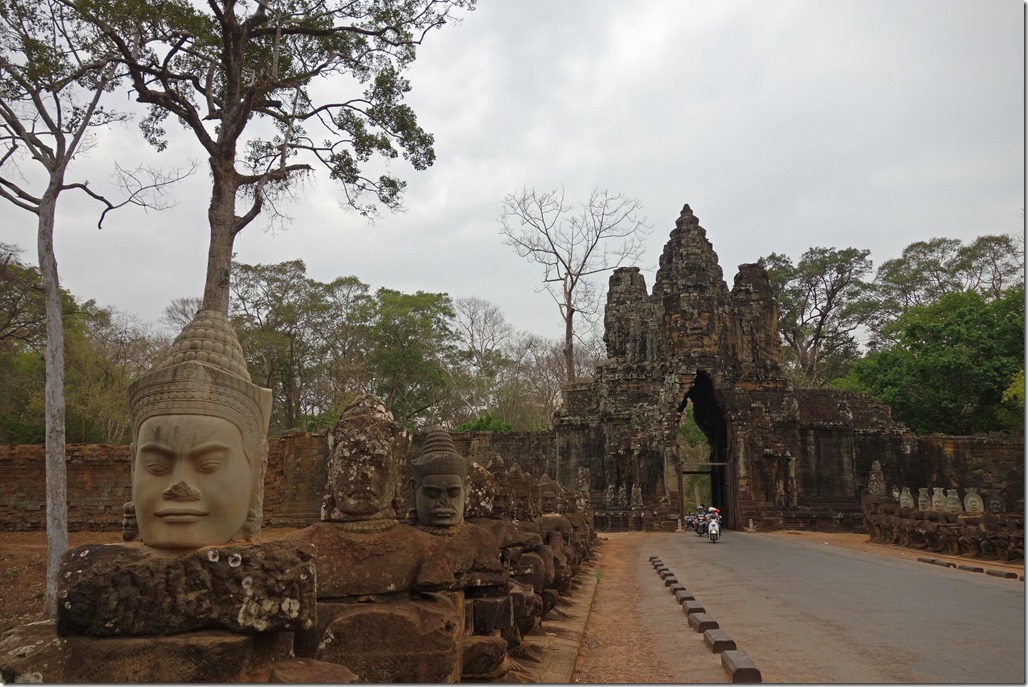 For my next day trip I went off to one of the nearby “floating” villages, Kompomg Phluk.  I’ve put that in scare quotes because I went during the dry season so there was no floating to be had.  Still a neat place, especially when you consider that during the rainy season the water goes all the way to the top of the stilts, though not in recent years: 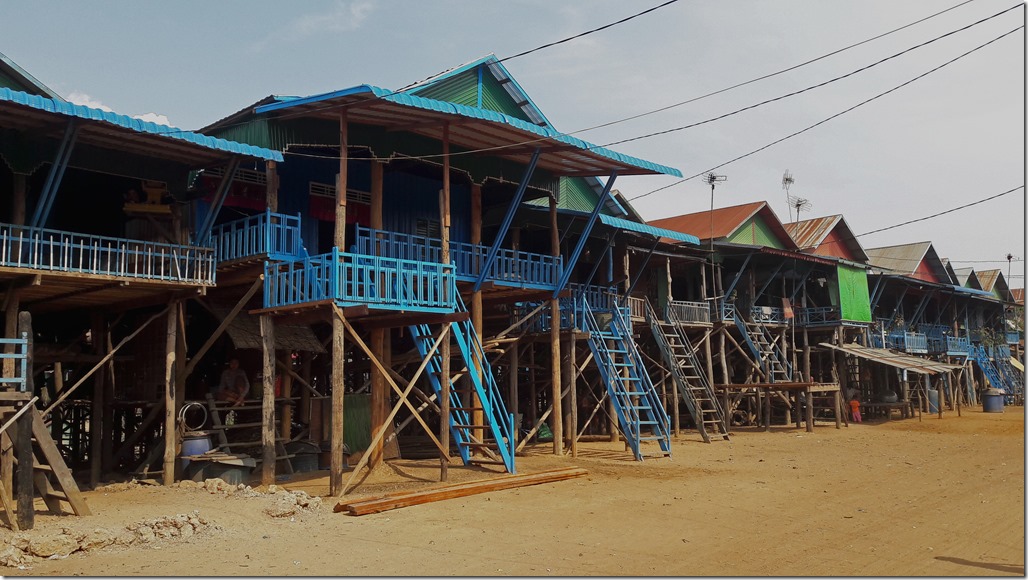 The tour included a brief boat ride on the nearby lake.  It wasn’t the prettiest lake but it was interesting to see the various crocodile farms in the lake (bred for food), and there are a number of very pleasant restaurants in the middle of the lake where you can eat and relax for a bit.  Low tide had hit by the time we boated back so we got brutally stuck in mud for a good 30 minutes:

My final daytrip while in Siem Reap turned out to be a bit of a disaster.  I had been told that Ker temple is a great place that is not visited often by tourists.  True enough, even though a number of tour companies offer trips there, in low season at least, I could not find a company that was actually running trips there.  Koh Ker is only 114 km away from Siem Reap, so I figured I’d hire a tuk tuk driver to get me there (going by car would have cost $100 USD).  Even finding a tuk tuk driver willing to make the trip out was very difficult, but I finally found a guy.

Morning of my departure rolls around and the tuk tuk driver never shows.  It’s a pretty lengthy trip and it was my last day in the city so I really needed to get going.  After much pleading, a tuk tuk driver agreed to take me out for $40 USD, but would not bring the tuk tuk along—he would only do the trip on a motorbike.  I figure why not, and next thing I know I’m barreling down highways and dirt roads reaching speeds of 70 kmph, without a helmet (he had one though).   And do you know how painful it is to ride on the back of a moped for 2.5 hours each way?  Very.

But the trip over was a piece of cake compared to the ride back.  First, he notices that he’s got a flat tire right as we make our departure from Koh Ker.  That delays us for about 40 minutes as he has the tire fixed.  Then about 30 minutes into the ride back it starts raining.  And I’m not talking Vancouver misty rain, I’m talking full on monsoon rain.  The only reason that my phone and camera weren’t ruined is that my backpack is fully waterproof.  I was soaked to the bone in under five minutes.  Also, do you think that bucket loads of rain would slow the driver down?  Nope, he keeps going 70 kmph, going over puddles which may very well be concealing massive potholes.  So I spent two hours terrified that we’d hydroplane, hit a pothole, or that the newly patched tire would burst.  Fun times.

Was it worth it?  I would say no but judge for yourselves.  I’ll leave you with a few shots from Koh Ker: 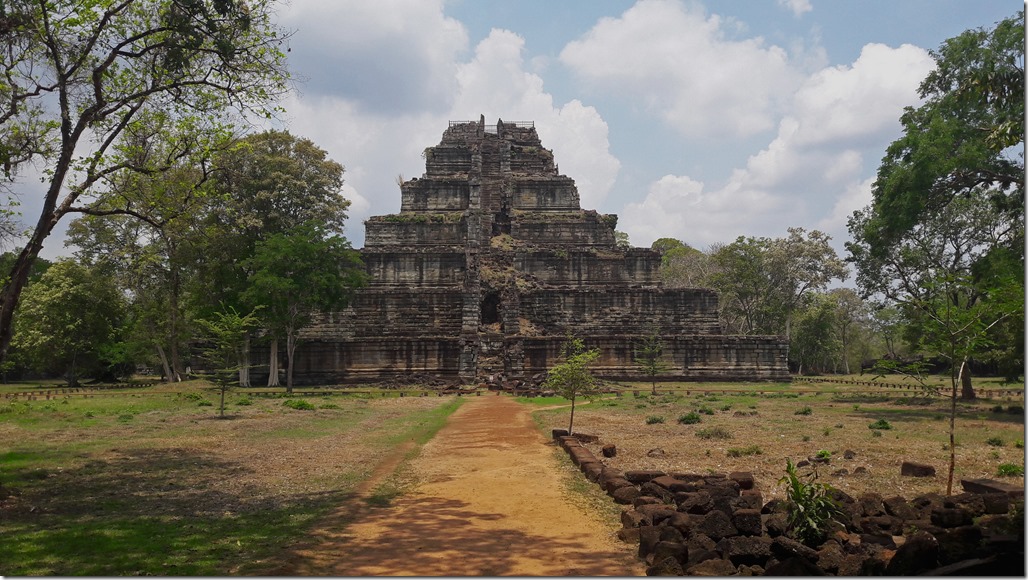 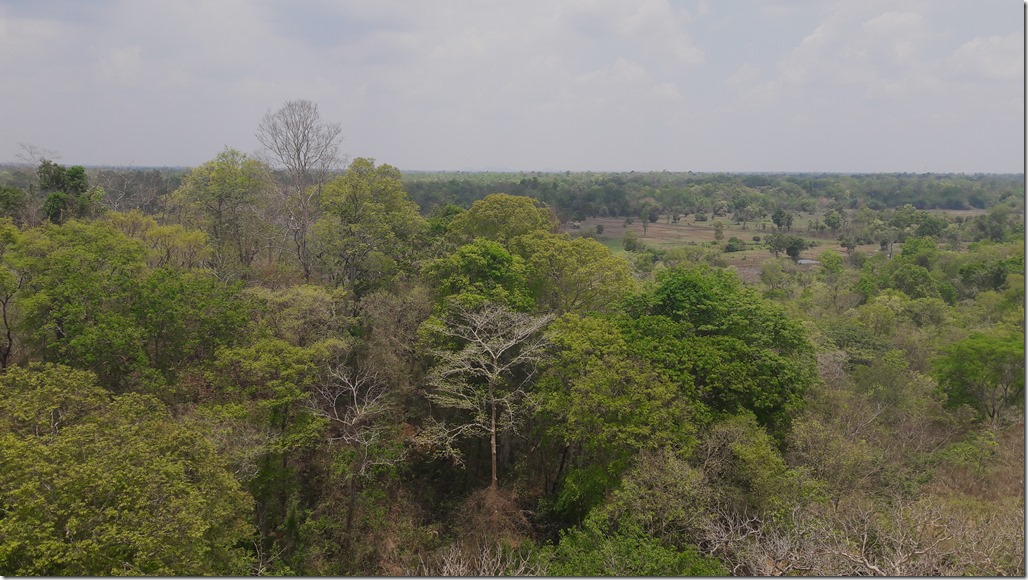 One thought on “Siem Reap”