I apologize for the huge delay between posts, I had a visitor for two weeks and many of my evenings since his departure were also unexpectedly occupied as there was quite the night scene at my subsequent destination.

Returning to my time in Lao, after three days in Huay Xai I was definitely ready to depart. As I mentioned earlier, the main reasons that people have for passing through this town are to: 1) cross over into Thailand, 2) go on the Gibbons Experience, and then my reason, 3) to take a long boat to Luang Prabang.

I picked the Shompoo boat company, even though it was rather pricey at almost $200 CDN for the two day boat tour. It did include two lunches, but the main advantage over the far cheaper normal long boats is that you’re actually guaranteed seating, and the seating is rather comfortable at that–they also make a few stops along the way. The boats are also fairly well stocked with snacks and beer, and the buffets were good. They also have clean bathrooms and plenty of space to lounge around. Some photos of the boats used by the company: 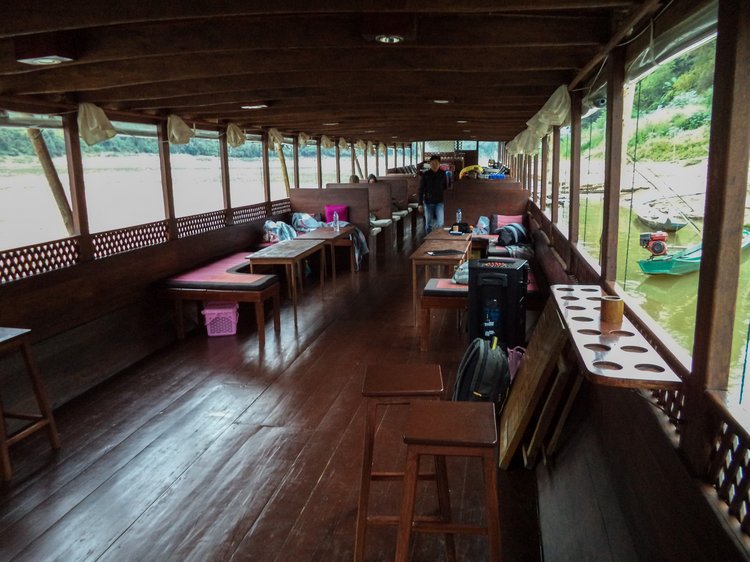 Once the voyage got underway, I was very glad that, despite the sweltering heat in Huay Xai, I had dressed warmly and had all my winter gear at the top of my bag. Within 2-3 hours I was wearing my Gortex jacket, long underwear, toque and gloves. I’ve spoken to some people whose journey was not nearly as cold, but I’ve also read plenty of accounts of a chilly voyage so it is wise to come prepared.

Some photos of the scenery on the first day of the voyage: 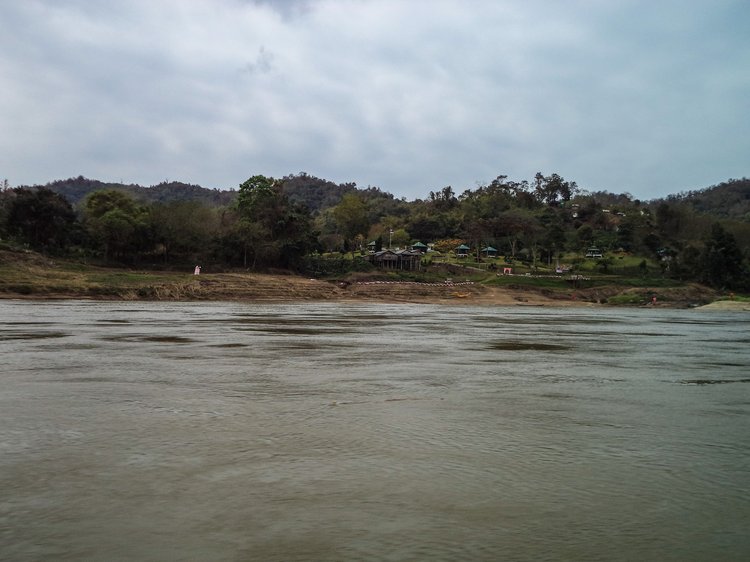 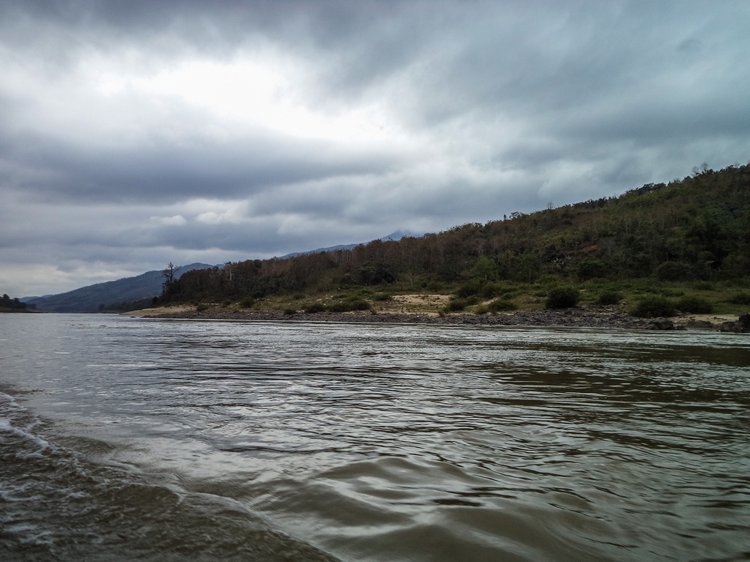 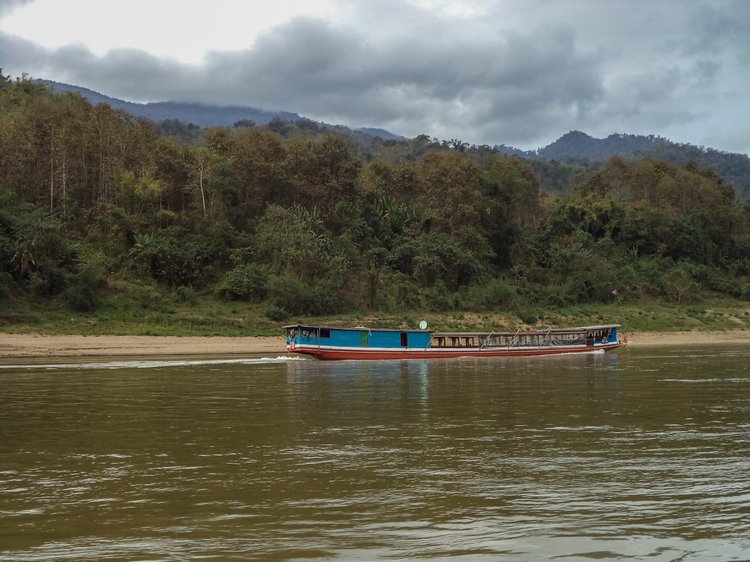 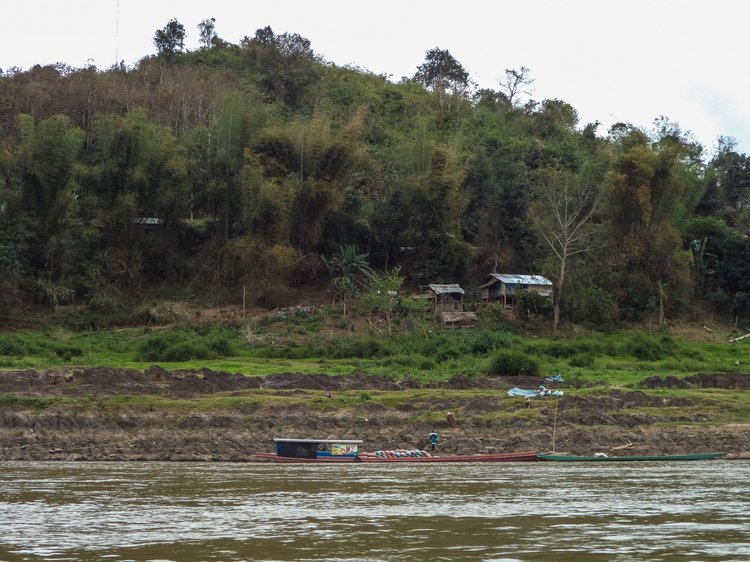 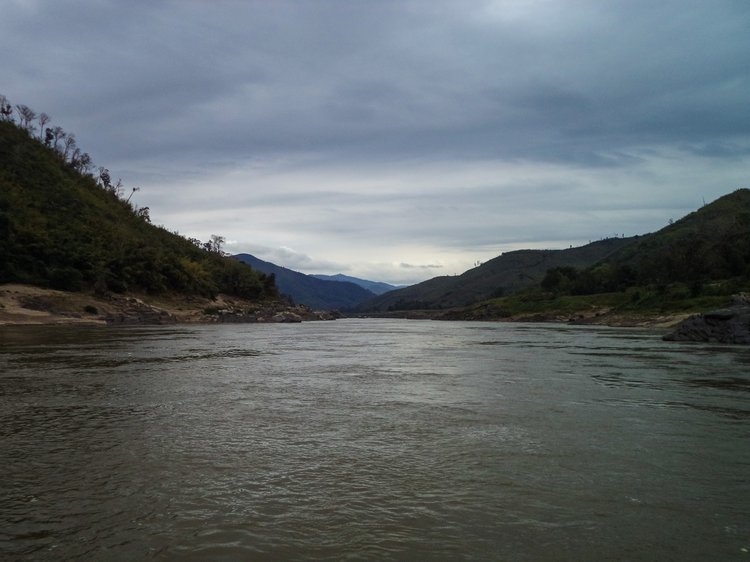 We made one stop along the way that first day at a traditional village next to the river. My understanding from our guide is that the company pays a small access fee to various villages along the way and they rotate their chosen stop of the day to spread the money and avoid overwhelming any one village. The villagers also set up a donation box to go towards sending the village’s kids to school. We were told that sending one child to school for the year only costs about $20 CDN and I can guarantee that pretty much everyone on the boat donated at least that amount, which would explain why they allow for the annoyance of 30+ people traipsing through their village a few times a month.

Some shots of the village: 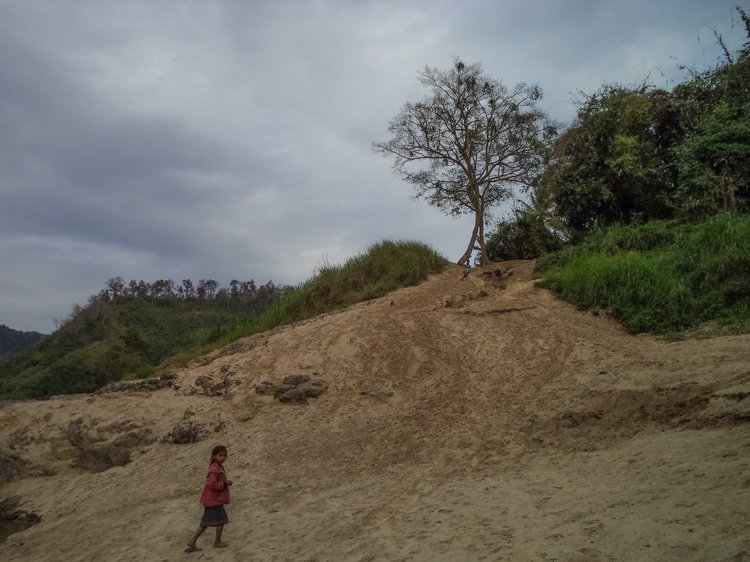 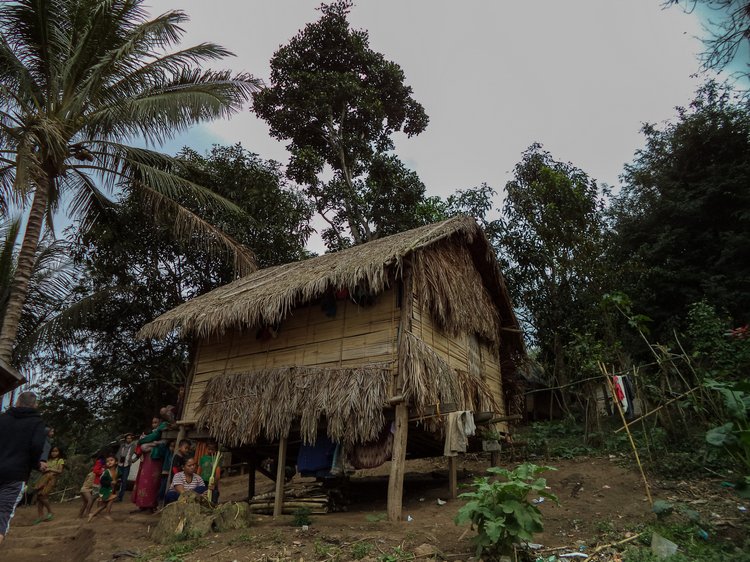 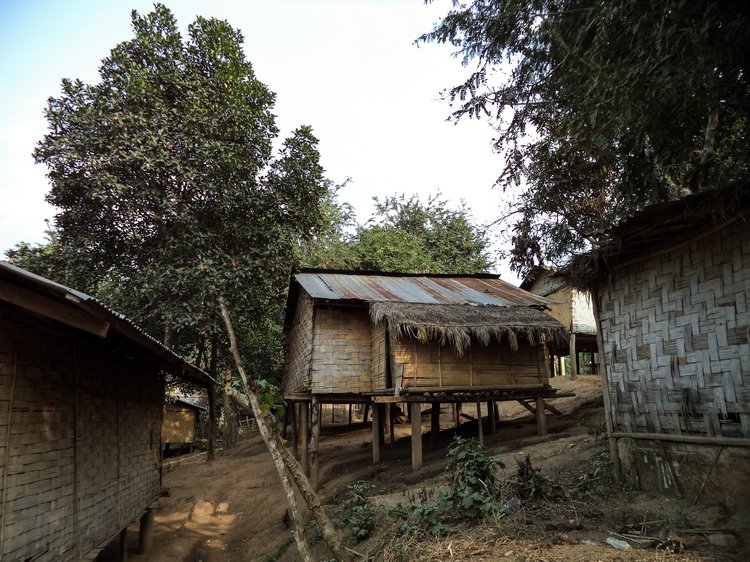 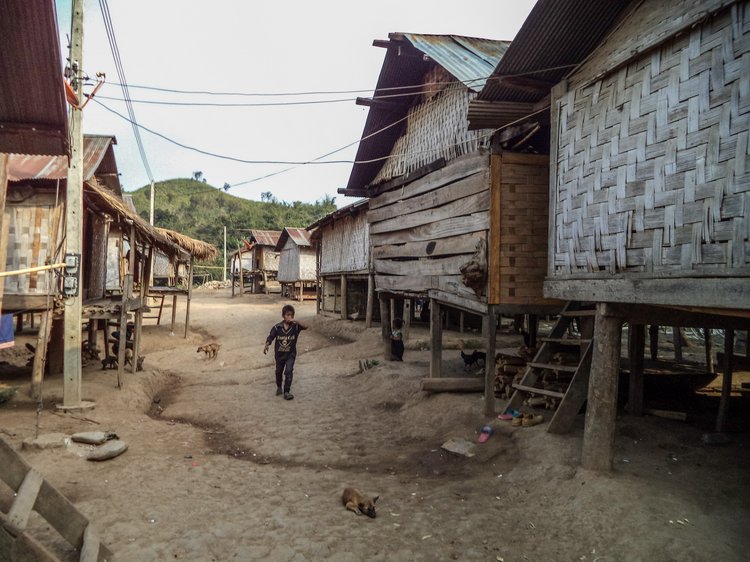 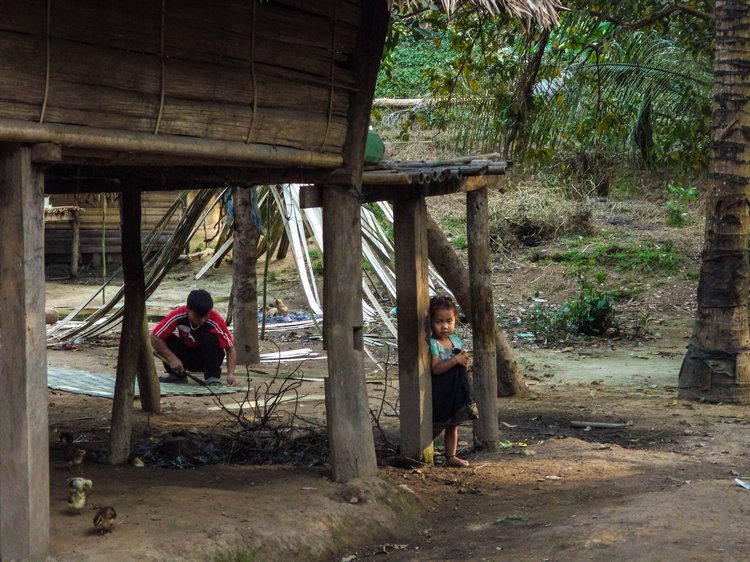 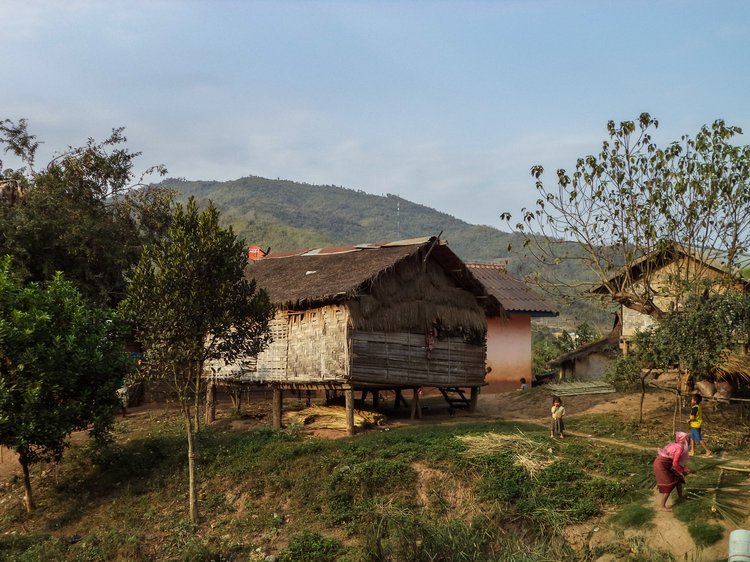 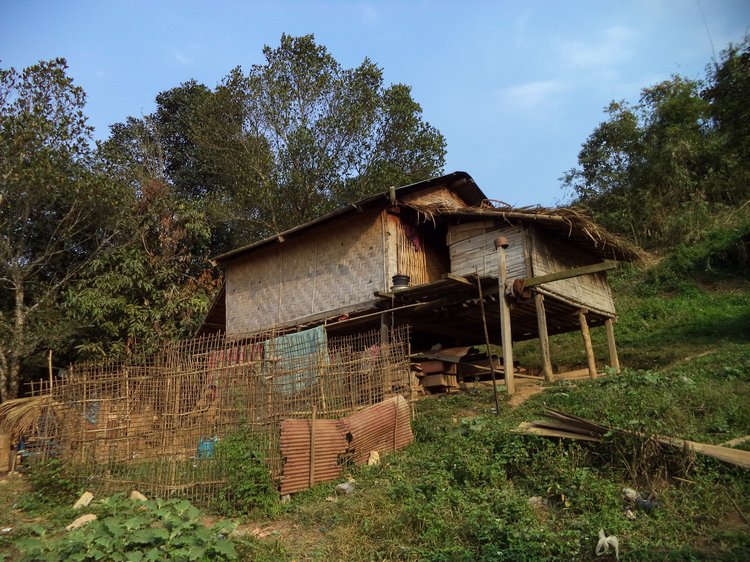 We continued on that afternoon for a couple more hours en route to Pak Beng. I should mention that while the boat ride is lovely, I frankly stopped taking pictures three hours in unless I saw something truly stunning. It gets pretty repetitive after a while so I would recommend that you bring stuff to keep you busy. Fortunately, I met a lovely British couple who kept me thoroughly entertained for the two-day ride. He is a math teacher, originally from Pakistan, she is a quasi-retired pharmacist, originally from India, both are hilarious. I can’t remember the last time I laughed so much over the course of two days while doing pretty mundane things like playing cards. The trip would have felt very long without them. We are still in touch and I defintely plan on paying them a visit the next time I’m in England.

Some shots of our stop-over for the night, the riverside town of Pak Beng:

I stayed in a pretty simple but clean hotel overlooking the main road to the city. There isn’t all that much to do there so I just edited some photos that evening and checked out a cool little bar across the street with funky decor and cool neon lighting. Alas, the camera I had with me at the time was terrible with night shots, so couldn’t take any shots of the bar at night. My hotel:

The following morning I had to wake up fairly early to catch the boat by 7:30 am. The view onto the river was so stunning however, that I woke even earlier than required so that I could catch a quick breakfast overlooking the river:

Morning at the river by Pak Beng: 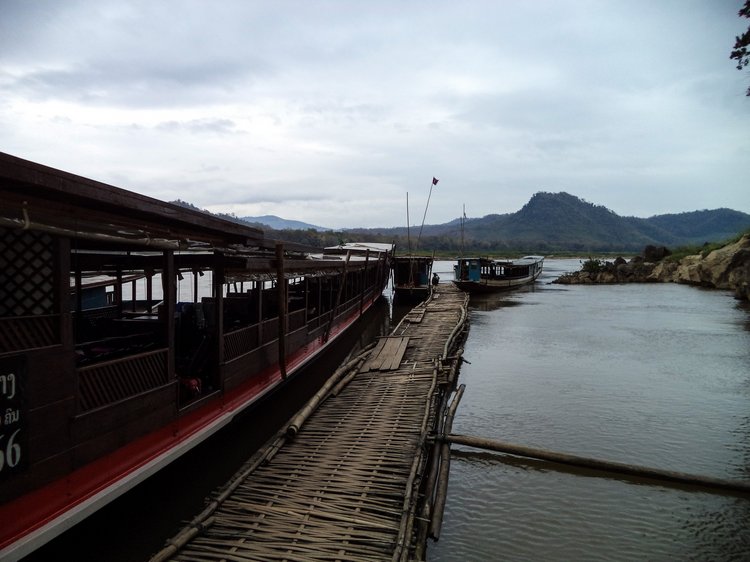 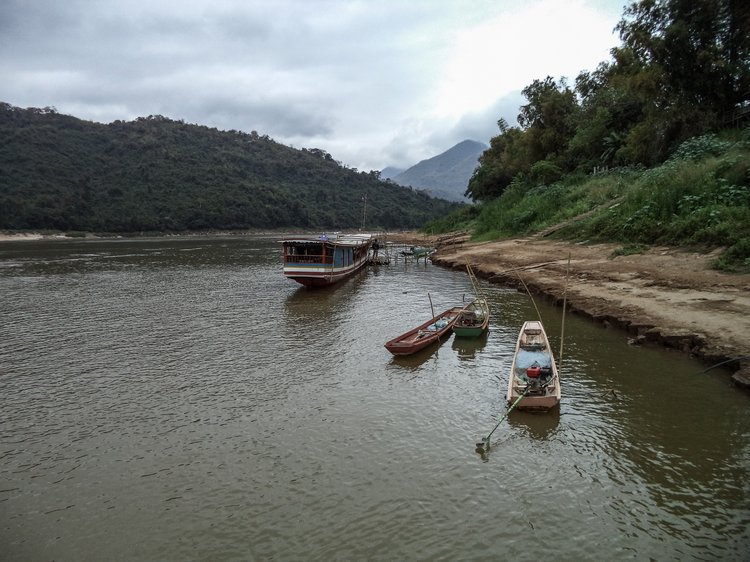 We made two stops on the second day of the boat trip. The first was at an unremarkable cave referred to as the Buddha Cave, because it is filled with tiny statues of Buddha. Sounds better than it looked, hence the lack of shots. The view from the steps surrounding the cave was another matter:

Our last stop right before arriving in Luang Prabang in the late afternoon was a town referred to as Whisky Village because it is famous for the Lao Lao (rice whisky) produced there. They make two types, one more akin to a rice wine, made from red rice, distilled to 15% alcohol, and the second one made from white rice at 50% alcohol. Neither is particularly tasty, but at least the stronger version is somewhat palatable. They also make really nice handcrafted products in the town. I visited the town again a few days later, so I’ll post my full photos of the place when I get to that point in my travel narrative.

We arrived in Luang Prabang around 5:00 pm, with plenty of time to have a relaxed dinner and get ready for my early morning departure to Vang Vieng the following morning. I ended up going to Vang Vieng twice, so I’ll put all my shots of the town together at that time. My next post will cover the three separate times I was in Luang Prabang.