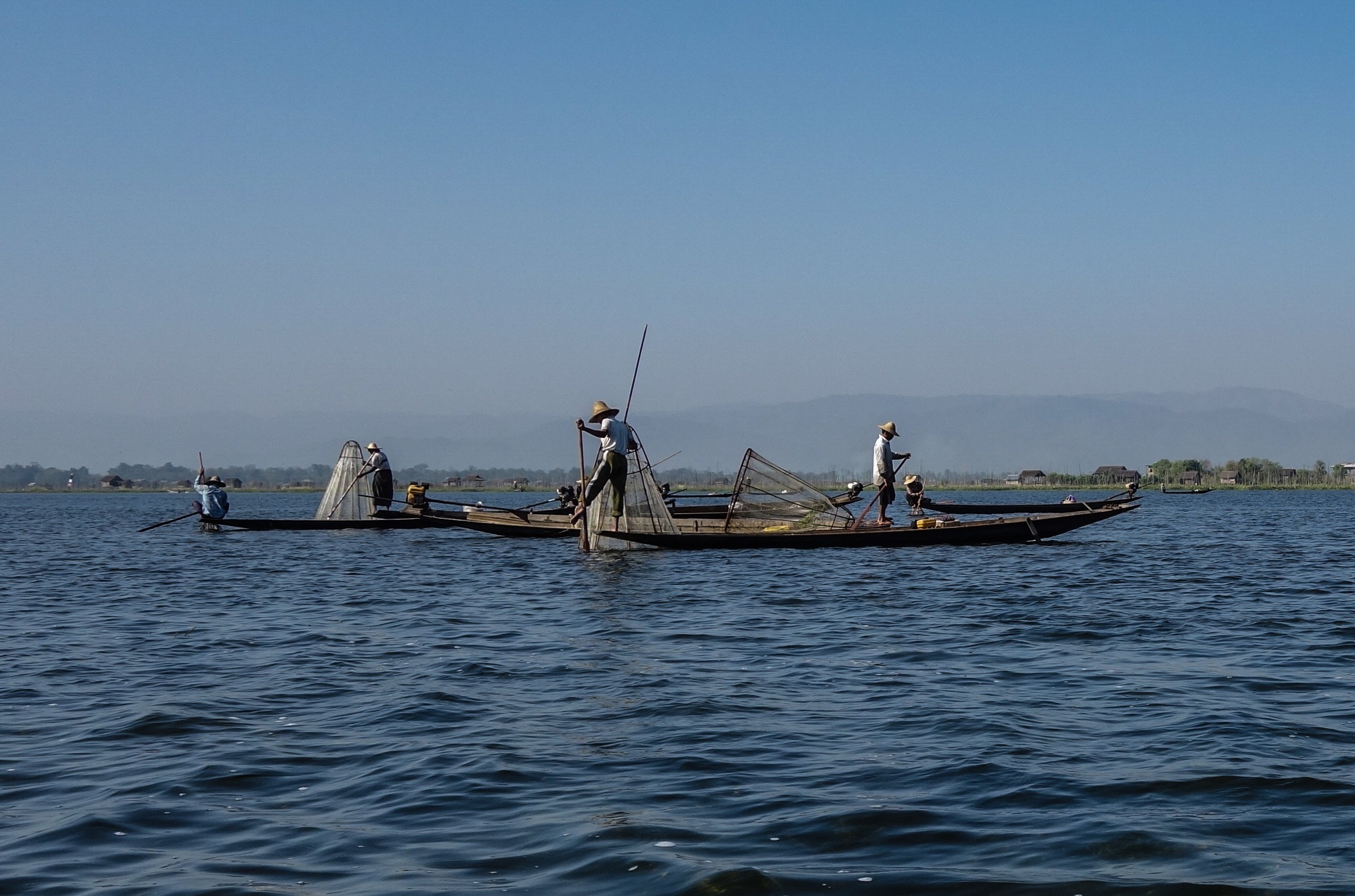 I spent one more night in Mandalay, and the next morning I boarded a bus to Inle Lake. The buses in Myanmar are pretty comfortable and affordable. My 8 hour bus ride to Inle Lake set me back $12 CDN including pick-up at the hotel and drop off at my hostel. The bus was also fairly comfortable, but for people in Myanmar instinctively leaning their chair back as far as possible, the leg room would have been great. But I can’t complain, my bus had individual TV screens for movies so the time passed by quickly.

This was my only hostel stay in Myanmar. Hostels are generally not that cheap in the country, $25 CDN a pop is normal, and given that for an extra $5 you can get a decent hotel room, there’s not much of a point in staying at a hostel. For couples, it really doesn’t make sense. It is a trade-off though, given that you get to meet people at a hostel very easily. My initial intended strategy was to book individual rooms within hostels, but strangely enough I never saw one under $50 CDN a night. Usually they were way more expensive than just going to a normal hotel (they make you pay for both beds at a premium, i.e. $30-35 per bed in a two bed individual room).

I had four days planned in Inle Lake and this hostel had rave reviews so I made it the exception. And the hostel really was quite good–each person gets an individual pod with a curtain so I got quite a bit of privacy. Also, all my stuff fit easily into the large locker at the foot of the bed so my things were secure. The co-ed dorm with quite a few very attractive women was a nice bonus. Surprisingly, even the quality of sleep was decent. They pretty much forced people to go to sleep at 11:00 pm so you were usually guaranteed a solid 7 hours of sleep until people departing that morning started making noise at 6:00 am. I met a ton of friendly people during my stay there and I spent many a lovely hour talking and drinking rum on the roof-top terrace. As a side-note, the rum in Myanmar is insanely cheap, you can buy a 750 ml. bottle of very decent rum for $1.50 CDN, which was unexpected given that mixed drinks at bar are just slightly cheaper than a mixed drink at a bar in Canada. Being the class act that I am, I opted for the premium stuff, $2 CDN a bottle.

The shot below is of the hostel, called the Song of Travel Hostel. Yup, the outside is shaped and painted like an 80’s era ghetto blaster. I would highly recommend the place, I’m not sure how they did it, but even the bathrooms were spotless at all times of the day: 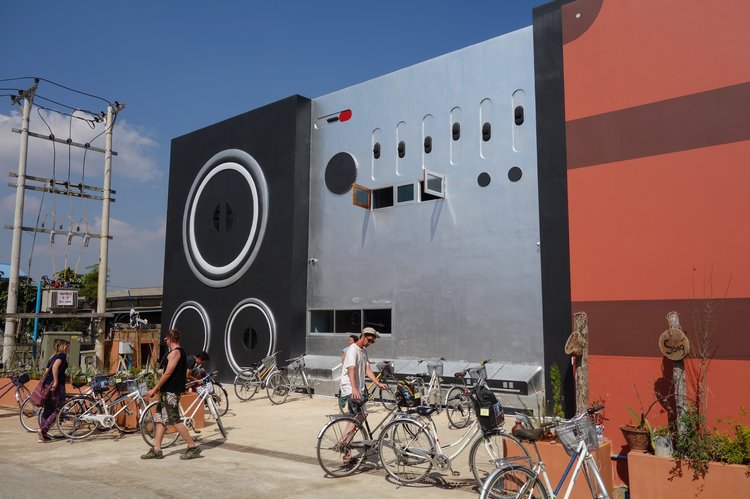 I arrived late in the afternoon on the first night, so I just organized my stuff and went out for dinner with a nice Dutch fellow I just met by the name of Thomas. After dinner we just sat up on the rooftop patio having some drinks before calling it a night.

The following morning a group of us took the hostel’s complimentary bikes to some vineyards a 15-20 minute bike ride away: 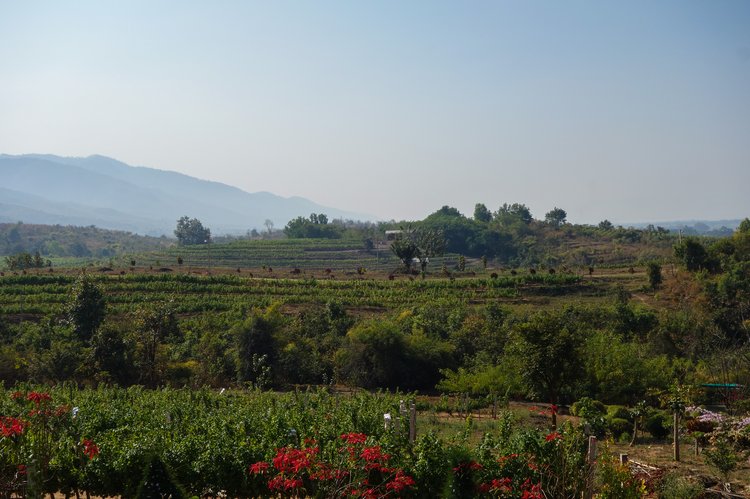 I did a bit of a wine tasting there. Verdict: the wine was mostly inoffensive, though the red did have a dominant rubber smell. On the left in the shot you have David and Brook, a very nice couple I met from the U.K. To my right I believe those are the legs of Mike, a friendly fellow from Malaysia, and some other random person: 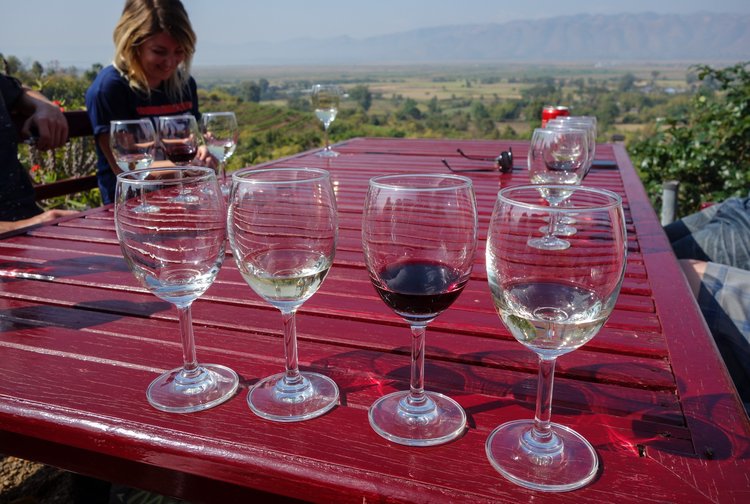 We didn’t do much else of consequence that day aside from having some dim sum at a local restaurant and checking out the main market in town: 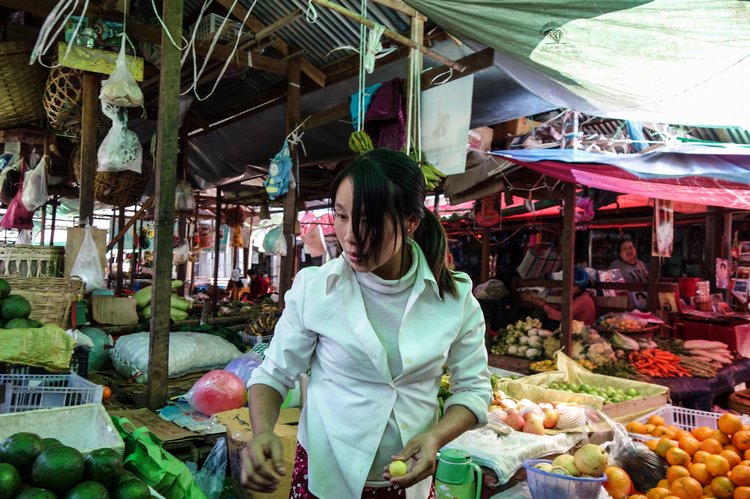 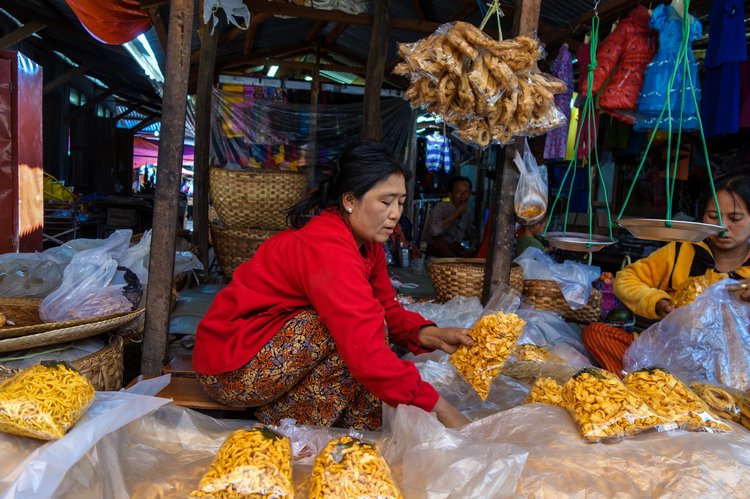 Drinks, music and conversation on the awesome rooftop of the hostel. That’s Brook on the left, and a super cool guy, Nick, from the Netherlands next to her: 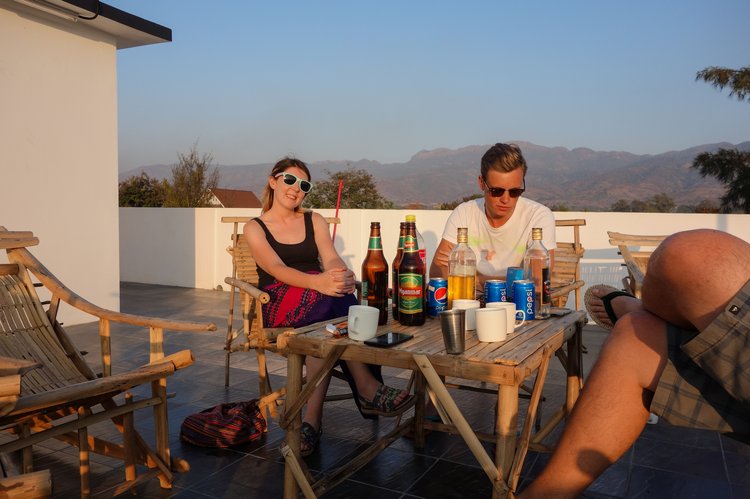 In general the time I spent at Inle Lake was just very social, which was much needed after two months entirely on my own. My favourite restaurant in town proved to be a place by the name of One Owl Grill with Vietnamese Art Deco decor that reminded me of the Comrade bar in Toronto. The restaurant served a killer rum sour and an amazing chicken brochette sampler with various sauces. This is also the place that served a mix of humus and peanut butter which was delicious and in retrospect is quite an obvious idea.

On my third day I finally booked a boat trip on the famed Inle Lake. The lake is known for the unique fishing and rowing style employed by the Intha people who inhabit the region. In terms of the unique rowing technique, they are known for rowing with one of their legs so that they can stand and look over the reeds (in modern times people just use motors though). For fishing they use the conical nets pictured below. The lake is only 2 metres deep so they push the net down and trap the fish within it. The net has neither a top nor a bottom (obviously the fish are trapped along the bottom by the bottom of the lake). The top is kept open because the fishermen then spear the fish trapped within.

Some shots of the fishermen: 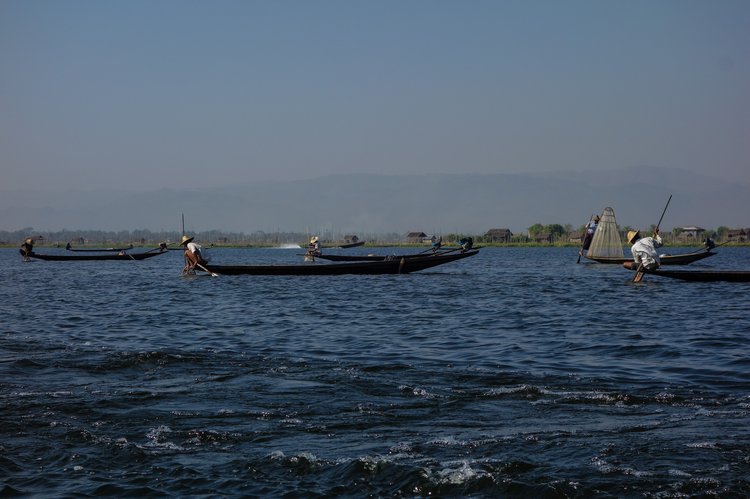 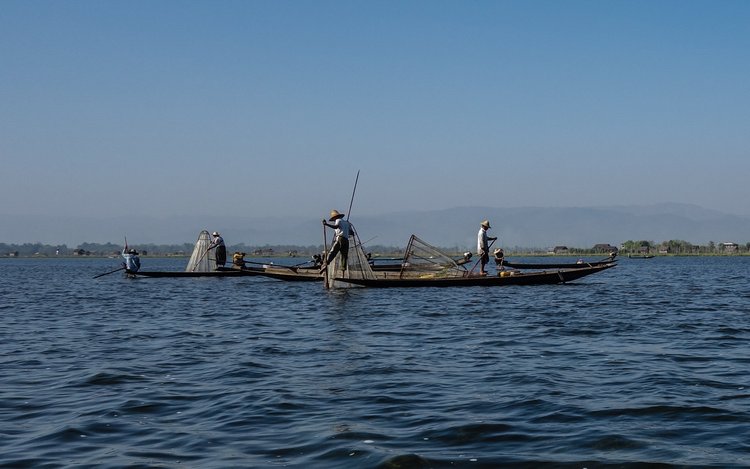 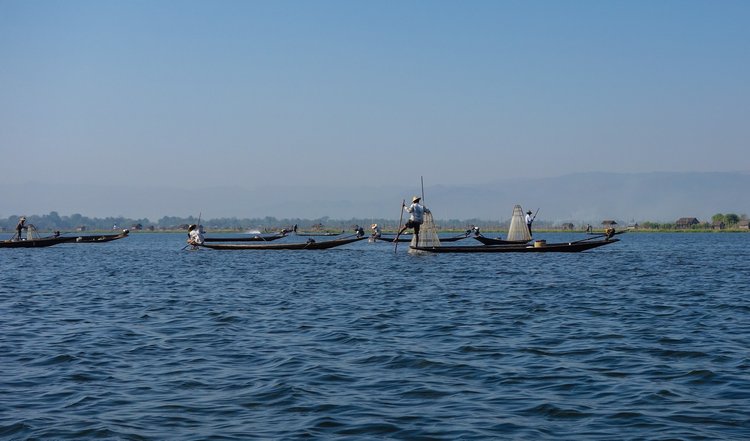 Inle Lake is a bit like Srinigar, many of the shops, homes and artisan shops are accessible only by boat: 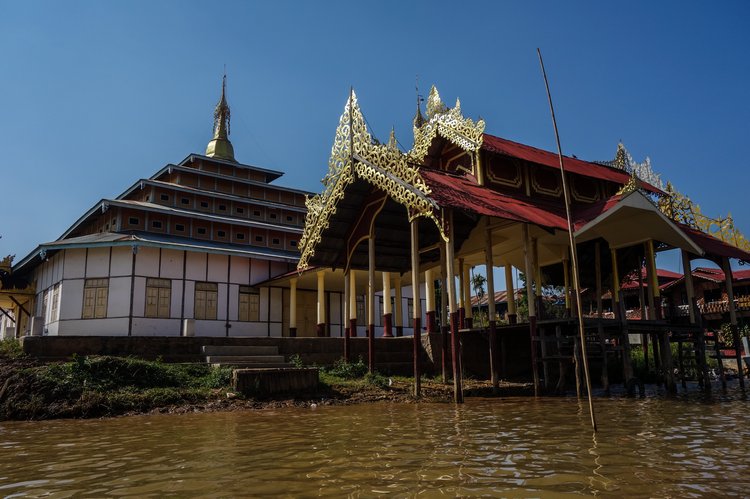 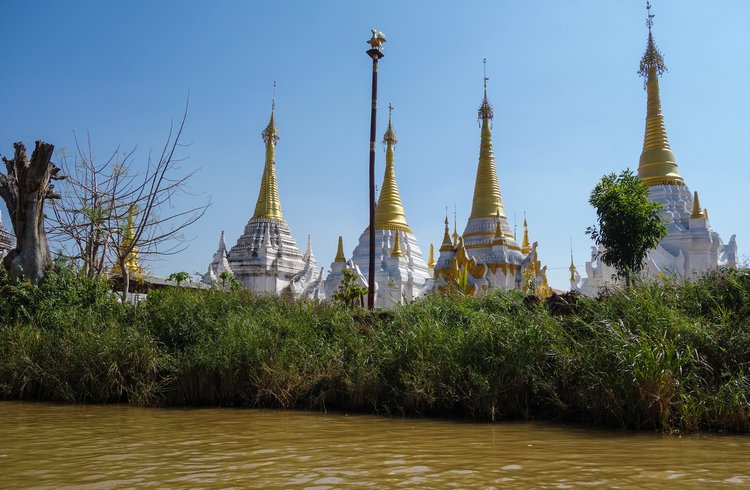 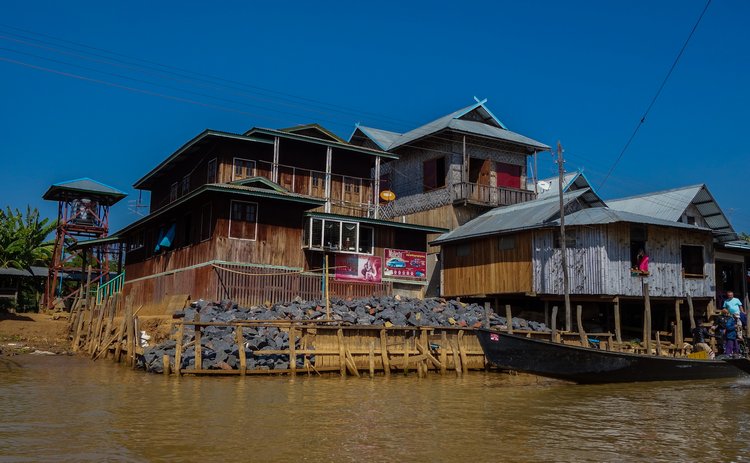 I wish I could say that our four hour boat ride was peaceful, though it was certainly picturesque. The main problem is that the boats make a massive racket, their engines are crazy loud. So perhaps plan the trip on a day that you don’t have a headache. You can hire narrow boats that fit up to 5 people–ours cost only about $10 CDN a piece for a 6 hour tour including pick-up and drop-off at the hostel. Me on the boat: 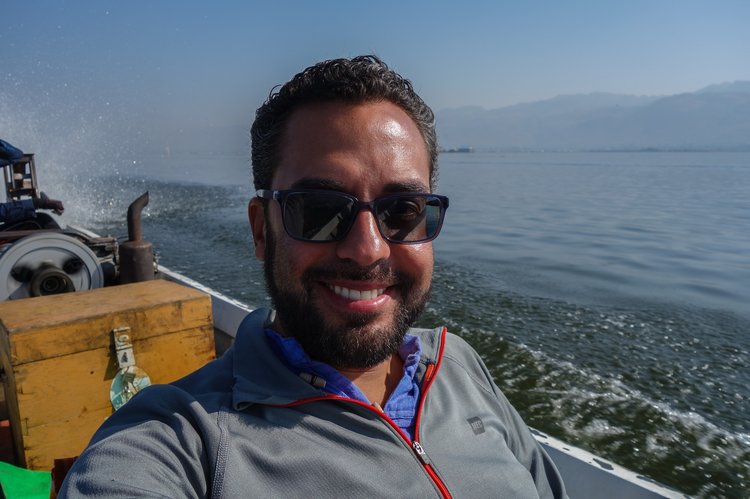 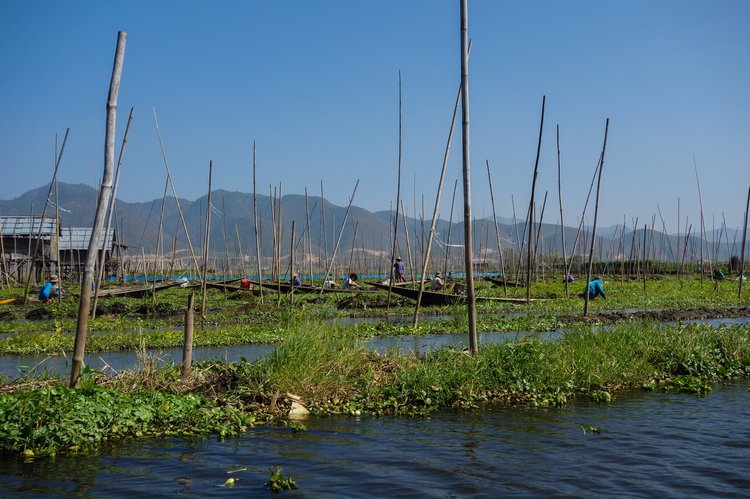 I’ll leave you with two shots of some of the buildings accessible only by boat: 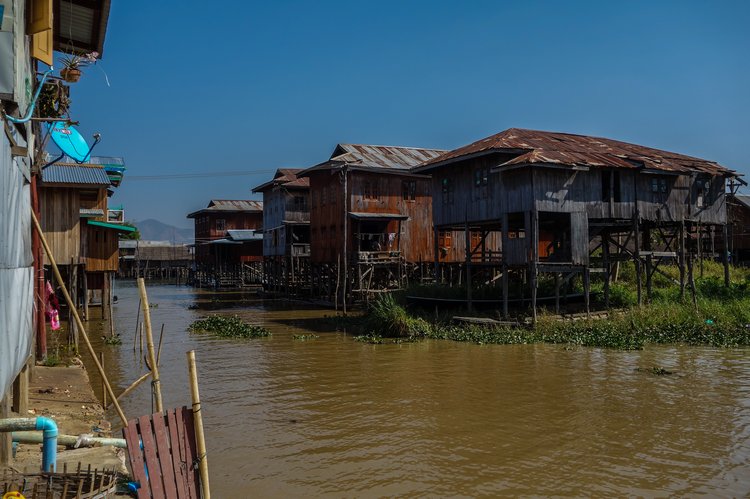 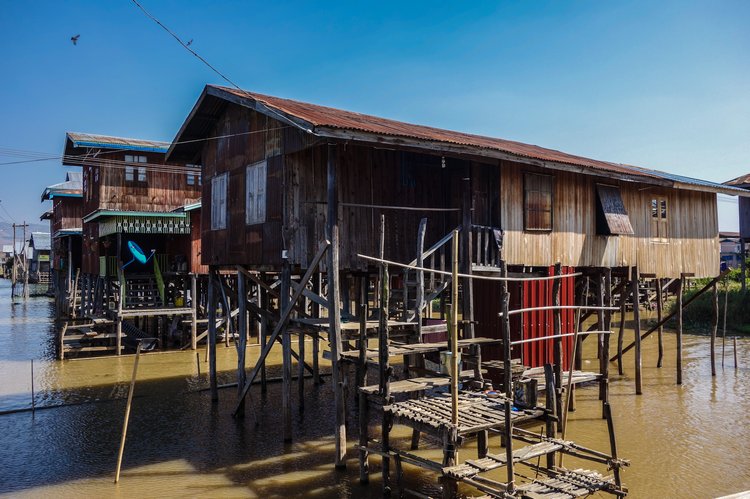 One thought on “Inle Lake”