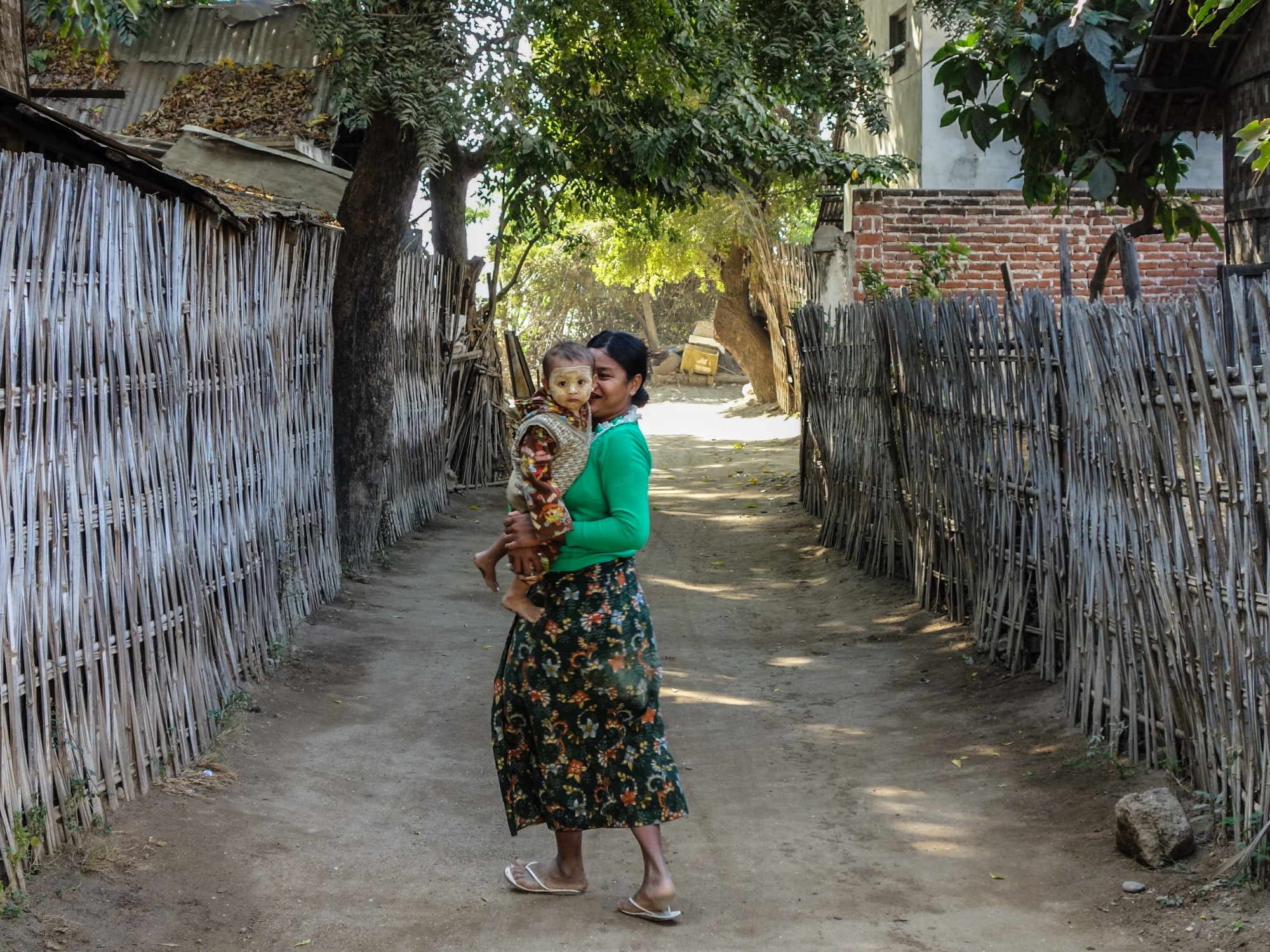 My next destinations were the cities of Pakokku and Monywa. Getting to the cities from Bagan is awkward because i) neither is visited often by tourists, and ii) they aren’t quite far enough away from Bagan to warrant a bus in any event. I COULD have gotten a bus to Monywa, but no one goes to Pakokku (only reason I went there is because I’ve been using itineraries from the Intrepid travel company posted online as suggestions for my travels). As such I had to hire a driver, which for a 3 hour drive came out to $65 CDN with a one hour stop in Pakokku which is a bargain.

Due to the recent construction of a bridge, the drive to Pakokku is only about one hour from Bagan. I was only planning for two main stops, the first one being the Thihoshin Pagoda. By this point all pagodas in Myanmar (with the exclusion of those in Bagan) were starting to look the same to me, so I was good with 15 minutes there: 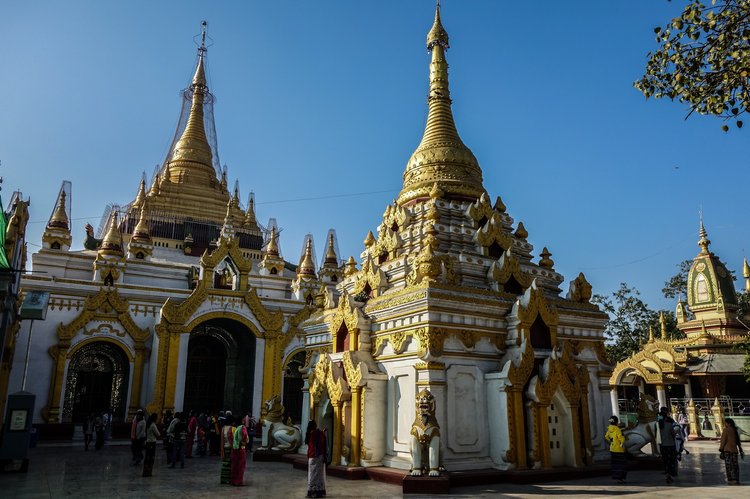 The more interesting stop for my purposes was the Myoma Market at the southern end of the town. I spent a good 45 minutes at the market, and then taking pictures of the surrounding neighbourhood: 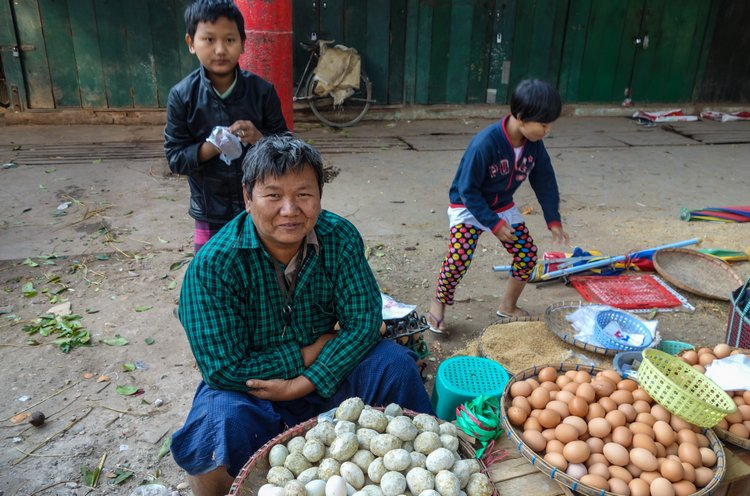 One of the things I haven’t mentioned yet is that women (and some men) paint their faces with a cosmetic called Thanaka. It actually took me quite a bit of time to get used to it, mostly because I first saw it in Yagon where the women who sport it make absolutely no effort to apply it artistically–the effect is that it looks like a significant proportion of women in Yangon have some skin condition that requires medication. Thanaka is made from ground bark, and its use in Myanmar dates back at least 2000 years. It is used both for cosmetic purposes and because it is believed promote smooth skin and remove acne. Some of the friends I made in Myanmar gave it a try and also said that it was very cooling in the heat. The women outside the big cities do make a significant effort to apply it artistically: 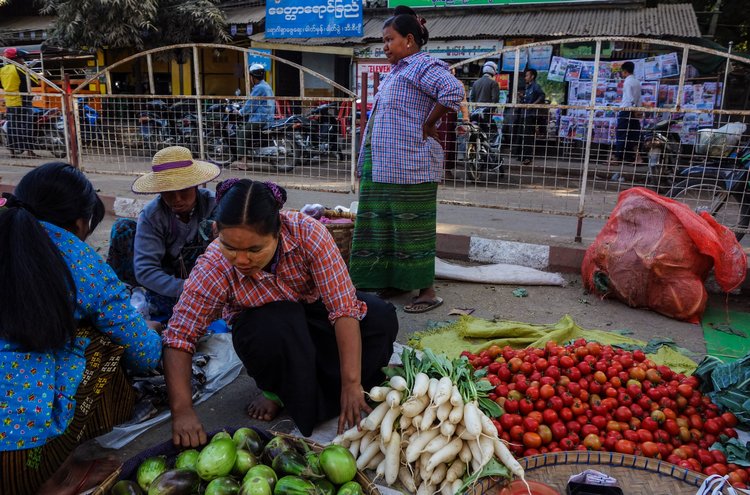 The area around the market looks remarkably modern, but just two blocks away you encounter these brilliant vestiges of the past: 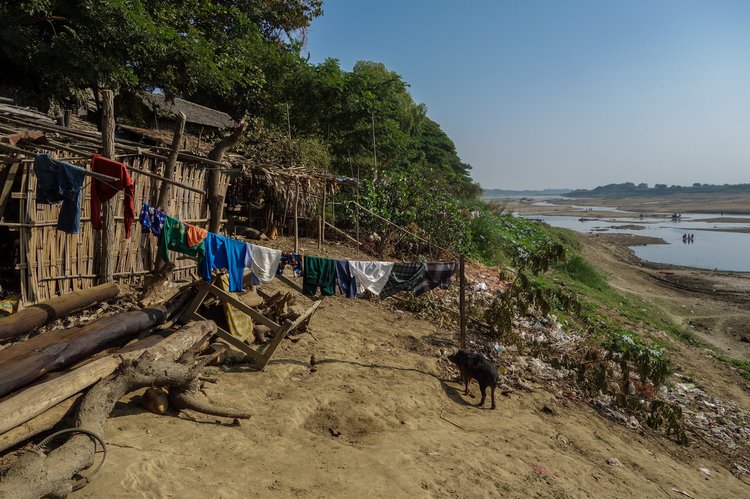 My driver, kind as he was, took me to another pagoda on his own initiative, even though it bled into the agreed upon time to spend in town:

I arrived in the mid-sized city of Monywa around noon. The city has virtually no tourists, but I ended up there because a travel agent suggested it was a good stop between Pakokku and my next destination, Mandalay. When I arrived I went to the bus station to arrange for my bus to Mandalay, which proved to be an easy process. My $10 ticket for a 3 hour shared mini-van ride included hotel pick-up.

Unfortunately, the main site I wanted to visit in Monywa required another motorcycle rental. I love hotels in Myanmar, the process of rentals is super easy. I mentioned my rental need at the front desk, and next thing I know the bellboy was renting out his personal motorcycle for $10 CDN.

The reason a motorcycle is required is that my destination, the Thanboddhay Praya, is 10 km south of the city, so a taxi ride down and back would set me back close to $40 CDN. The ride was pleasant enough and safe, ending in what is one of the kitchiest religious complexes that I’ve been at so far: 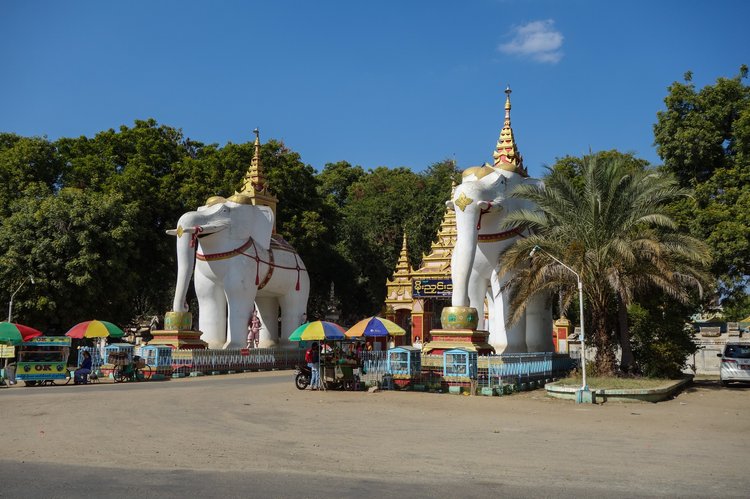 Yup, those are mini pagodas at the top of the pagoda: 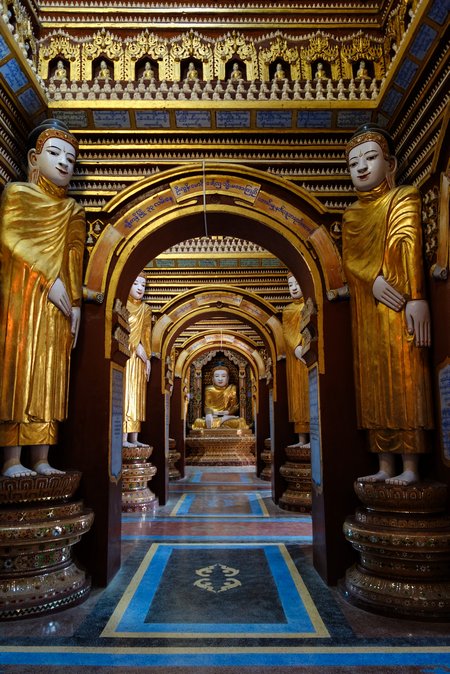 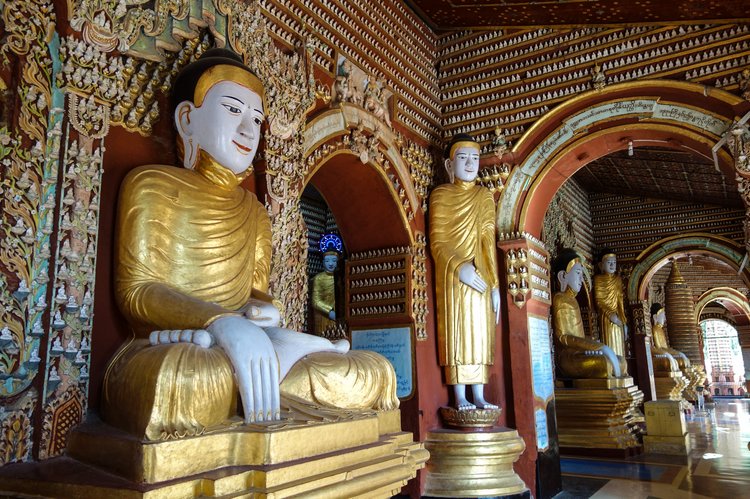 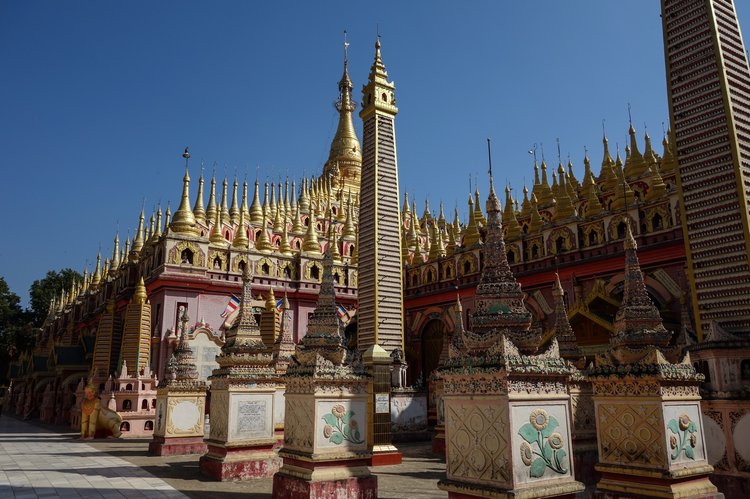 Yup, even Buddhist monks in training behave like other tweens when it comes to their cell phones:

After visiting the modern complex, I rode back up to the centre of town to check out the two main pagodas in the city. I wasn’t able to find the name of the first, but the second is the Shwezigon Paya: 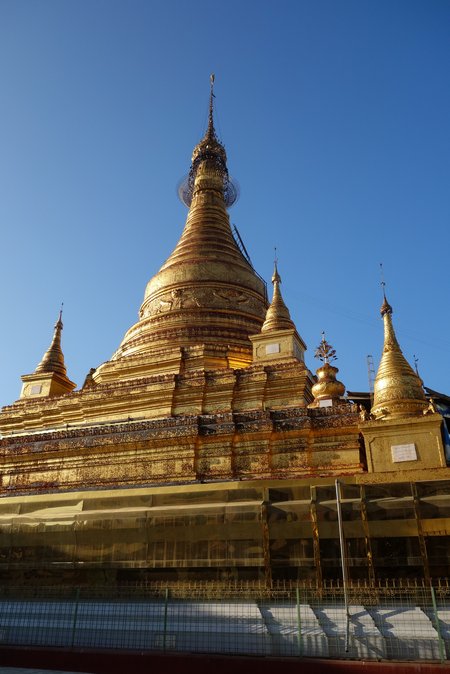 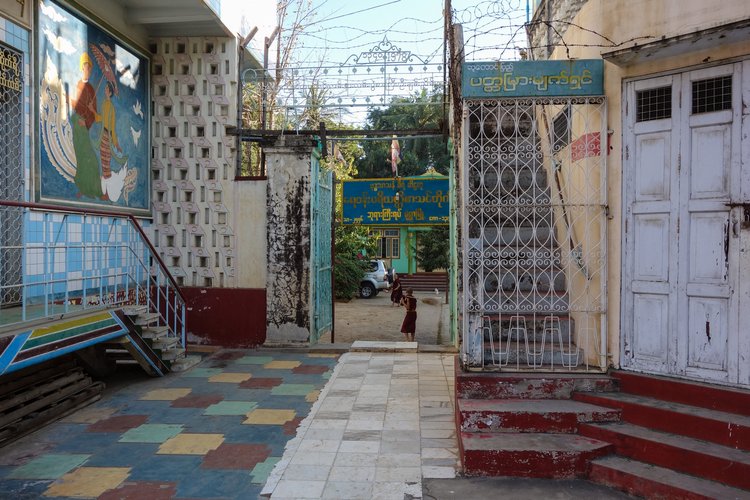 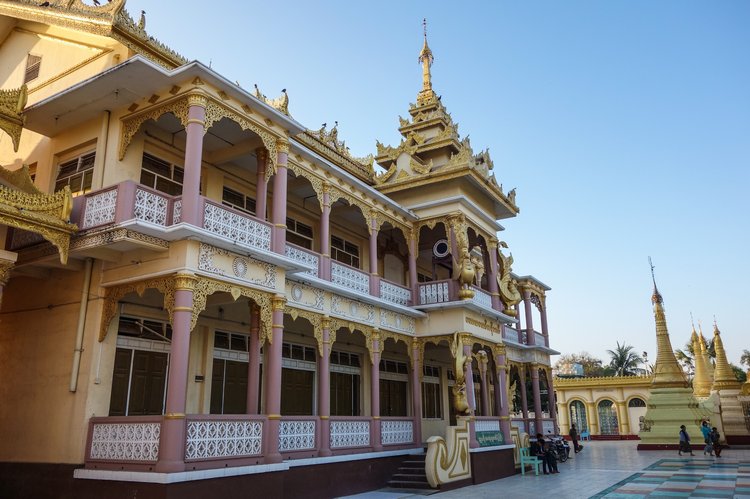 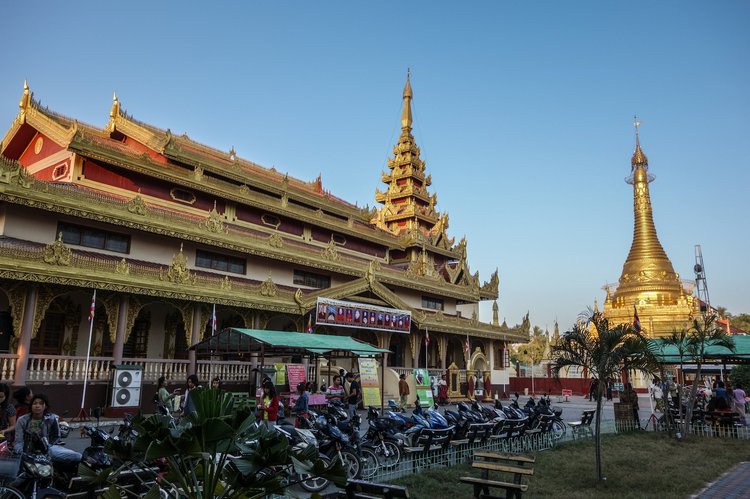 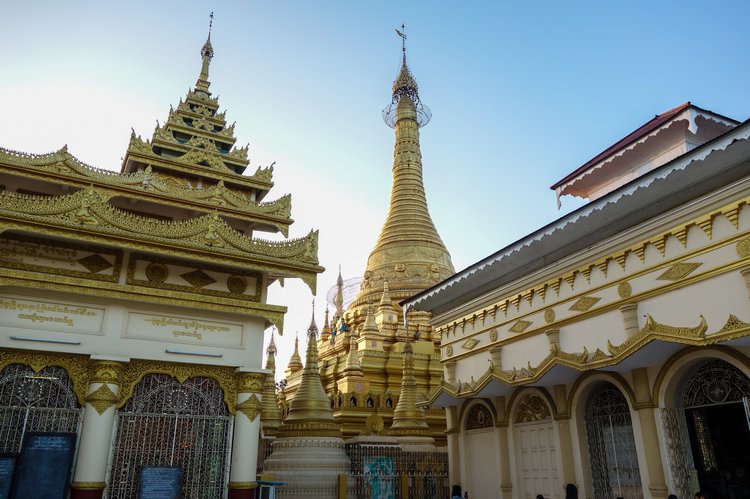 I’ll leave you with a shot of the same place, from the roof of my hotel which happened to be next door: 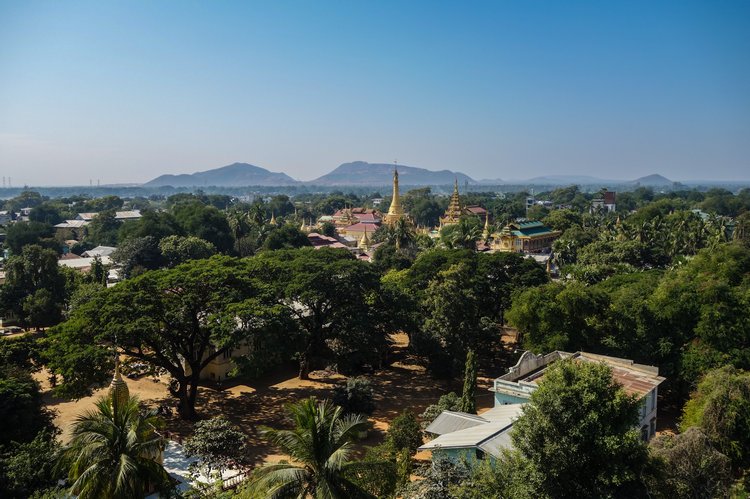 One thought on “Pakokku & Monywa”