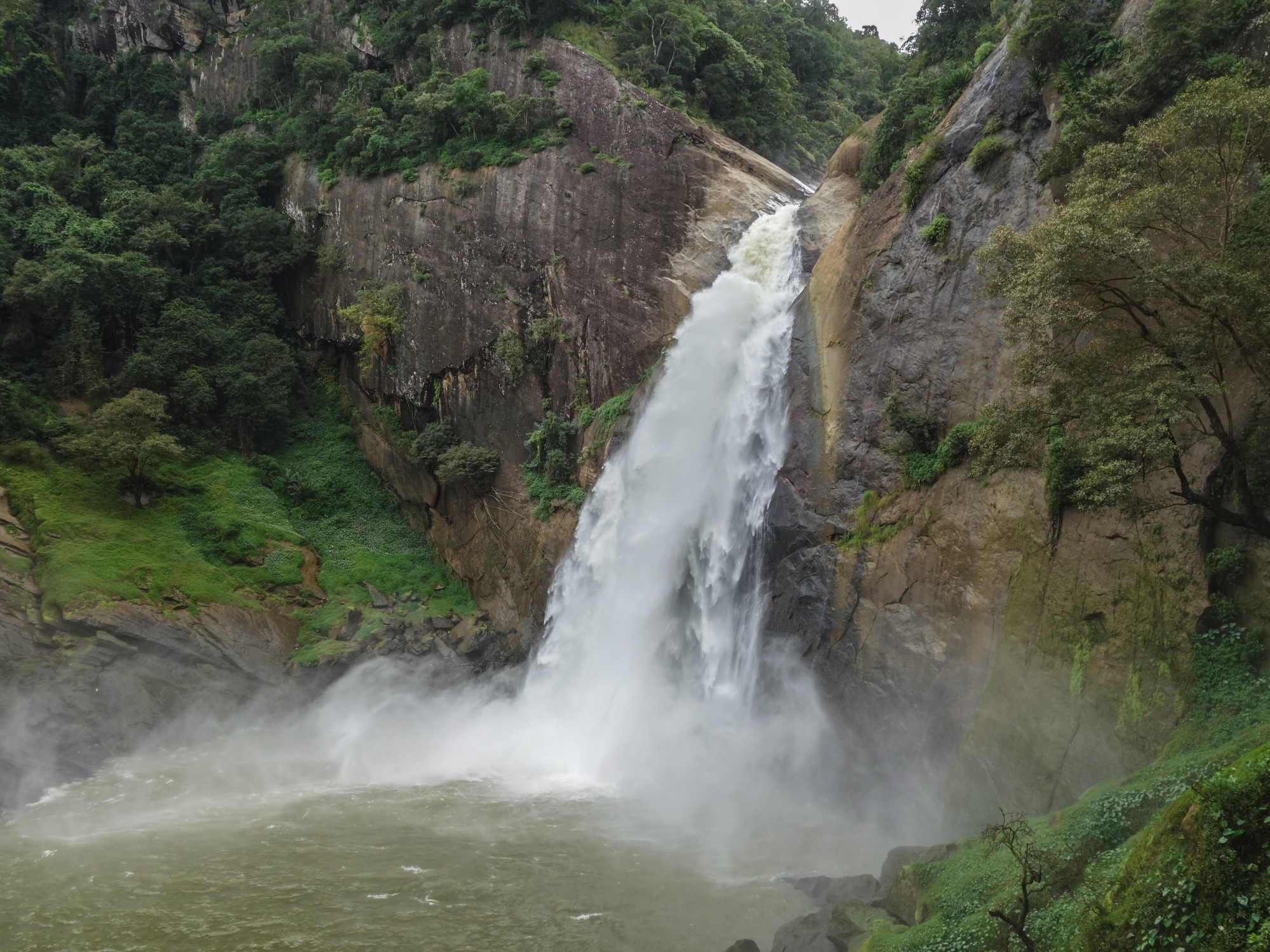 My next destination was the lovely town of Ella, up in the mountains. There isn’t really anything to see in the town itself, it’s more about hiking around the lovely mountains and checking out some waterfalls. To that end, I only had one and a half days there and it was more than sufficient for my interests. People into more hiking will definitely be done with the place in no more than three days.

The town itself is nice enough, but it’s packed with tourists and pretty much all of the businesses cater to them, so there’s not a lot of culture to check out.

I was still really annoyed at the last bus ride from Tangalle to Arugam Bay, so I splurged a bit and had a tuk tuk take me all the way to Ella for about $60 CDN, which is expensive but also a relative bargain for a 4 hour drive when you consider that it’s an 8 hour round trip for the fellow. On the way, the tuk tuk driver stopped at the Ella falls, so that saved me a $10 round trip to the falls from the town, and twice that from my hotel, so the overall price was definitely a bargain. 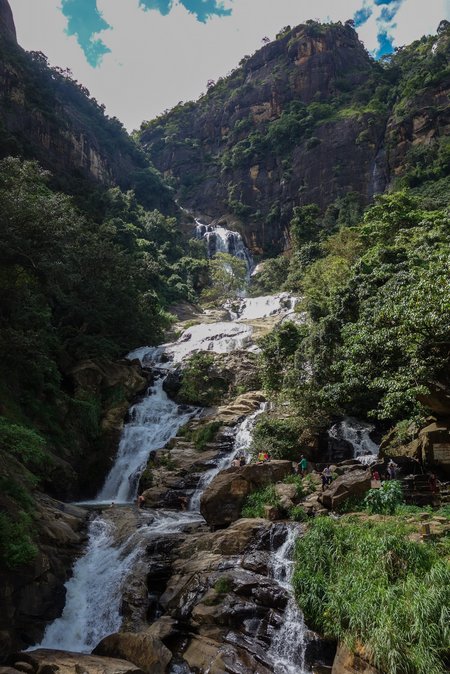 I was surprised to see people swimming at the bottom of the big falls. Just as I was commenting that it was interesting for tourists to be allowed to do so, two police officers showed up and forced them out:

The awesome mountain road leading up to Ella: 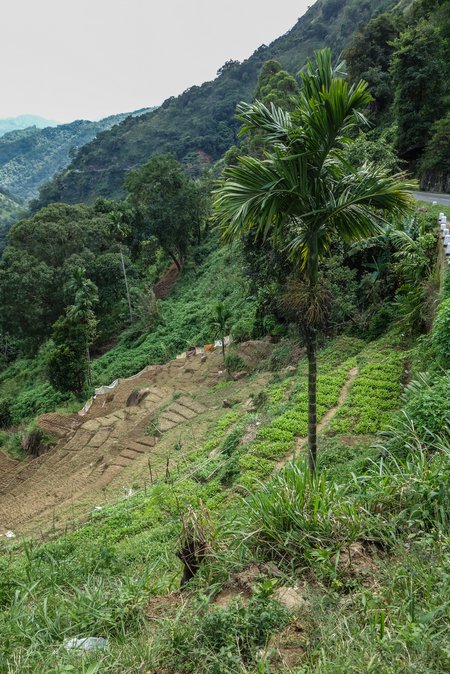 I had a quick lunch at a tasty place called the Dream Cafe in town, during which I realised that my hotel was really nowhere near the city of Ella. I was a little bit upset at first that the hotel would list the town of Ella in its address when its actually a 30 minute drive away, but once I determined that there is no real reason to go into the town proper, and saw how gorgeous the location of the hotel was, I was placated. The only downside is that it costs $10 USD each way to make it into town.

Important word of advice for those of you travelling to Ella, go to an ATM at your previous stop. I was fine, but there is literally one bank machine in town and the nearest bank machine if that one breaks down is a 20 minute drive away. You do not want your cash situation to be dependent on the whims of a single machine.

Late in the afternoon, I finally arrived at the awesome Hideaway Hotel–aptly named given that there is no other home for at least one kilometre and certainly no other hotel remotely close by.

The view from the balcony of my room:

After settling in, I put on my hiking boots (unnecessarily as it turned out given that the road is well paved) for a 2 hour hike up and down the mountain before sundown. Some shots of the surrounding area from my walk: 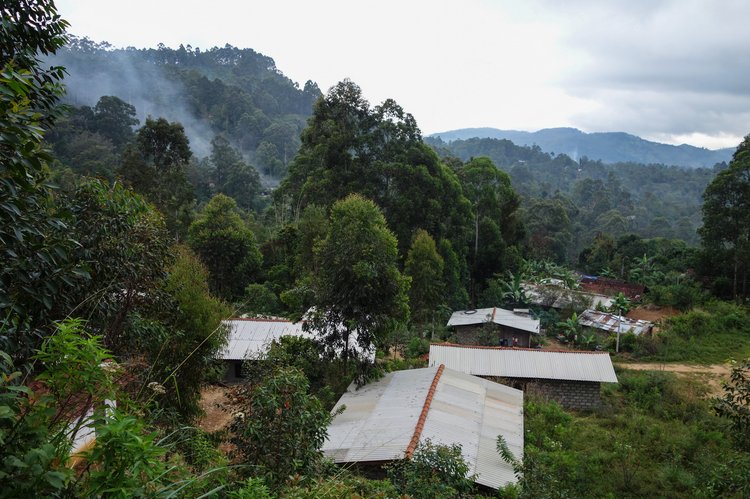 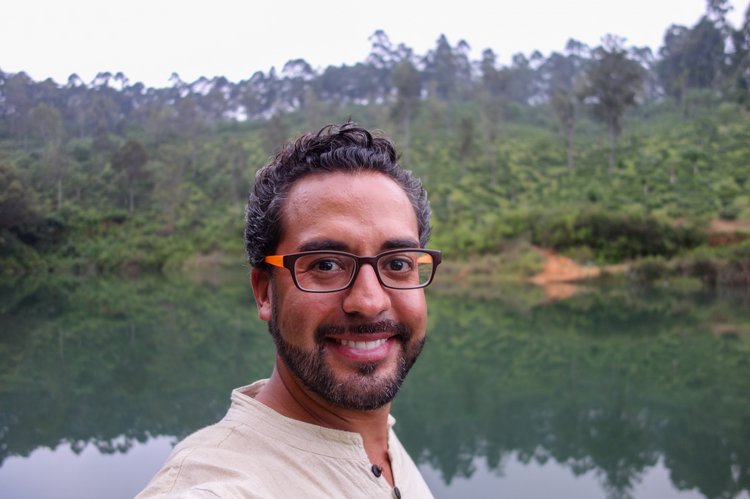 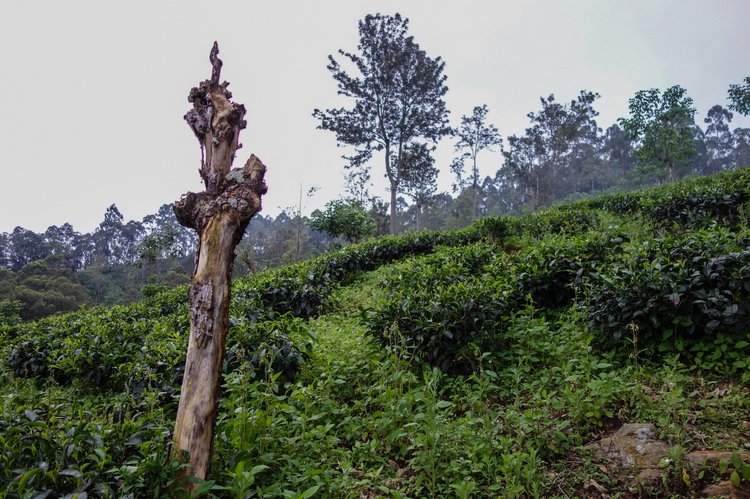 This is my hotel from afar, picture taken as I was returning from the hike:

Because the hotel is in the middle of nowhere, you pretty much have to eat all of your dinners there. Fortunately the food and service are excellent and they have quite the varied menu. The hotel property at night is also lovely, all of the rooms above the ground floor either have a balcony or access to a terrace overlooking the valley.

Selfie from my balcony the following morning: 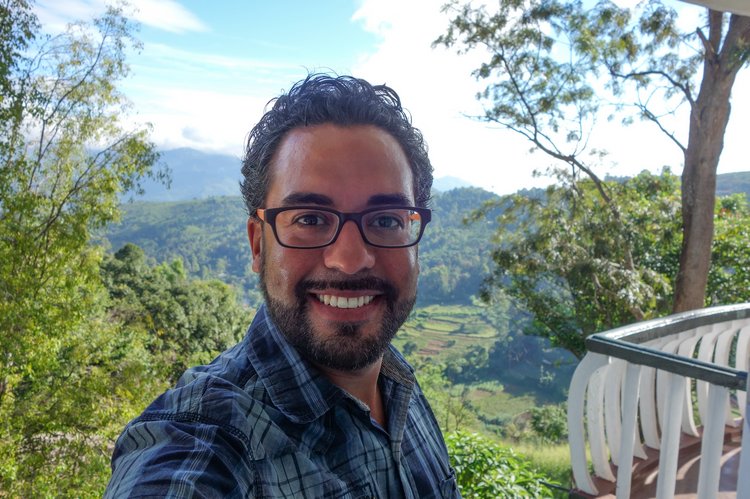 One of the best aspects of the hotel is that the family that owns it is really friendly. They knew that I had to make it to a bus in the morning and so the husband who was heading into town gave me and two other guests are ride, thus saving us the transport fee–which is remarkable because they have a tuk tuk driver that they use to ferry the customers to and from town and I’m sure the hotel must get a cut.

Anyways, I wasn’t actually headed to Ella for the day, but rather to the nearby city of Badulla which had been recommended to me. The husband gave me a ride to the nearest town, Bandarawella, that has buses heading there. This was the only time in my entire experience in the country that I saw some of the more comfortable transport options in Sri Lanka. My transport was essentially a large minivan where they guarantee that everyone gets a seat, some actually very comfortable. It’s maybe 30% more expensive, but that only meant that my 1 hour trip into Badulla cost all of 80 cents. Even though Lonely Planet says that these minivans are ubiquitous in Sri Lanka, this was the only one I got to take during my whole time in the country despite repeated attempts to do so. The ride was also a ton of fun because I happened to be the one person dead centre in the minivan and given that the operators made use of all available space for seating, the fellow collecting the fares didn’t have aisles to work with so I was effectively the one handling the cash back and forth.

My first stop was the Kataragama Devale, a neat little site completely devoid of tourists. The current structures were built sometime between 1635 and 1687 by King Rajasinghe II of the Kandyan Kingdom. The claim to fame of said King being that he was the first Sri Lankan king to defeat a Portuguese army, here trying to invade Badulla: 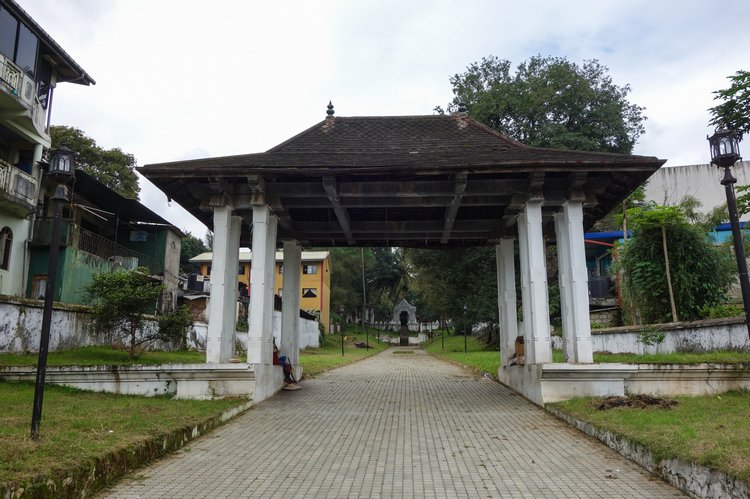 After that I ventured on to the Muthiyangana Raja Maha Vihara. Local Buddhists believe that this site was visited by Gautama Buddha and it is therefore regarded as one of the 16 most sacred Buddhist sites in Sri Lanka. It is said that during this visit, the king of the Naga people who had invited him to attend requested something to worship in memory of his visit. Buddha is said to have given him strands of his hair and beads of sweat that transformed to pearls. These are believed to be in the stupa at the centre of this site.

To tell you the truth I absolutely detest stories like this because based on my studies, the historical Buddha would have lost his freaking mind at the thought of people worshiping him. Buddha was all about getting people to bloody meditate as a way of reaching enlightenment and it has been killing me to go to Buddhist sites and see people praying to Buddha. However, I calmed down quickly as this was one of the only Buddhist sites where I saw someone actually meditating which made me feel much better. And the grounds really were lovely in their mellowness. I could have spent hours sitting there: 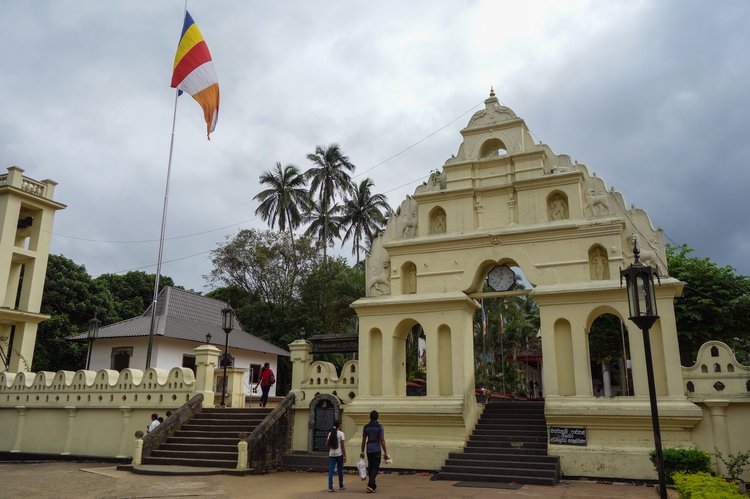 These are called, Moonstones, technically designed to wipe your feet before arriving at the stupa (but honestly quite painful to walk on):

The iron sculptures are designed to hold butter candles:

After that I decided to check out the Dunhinda Falls about 8 km south of the city. You can take a bus down from the Badulla bus station to the falls which takes around 15 minutes and costs pennies. The trick is to catch it at the right time because it only goes every 30 minutes.

The walk down is pleasant in itself, even in the heat and humidity. But factor in quite a bit of time as I figure that it’s about 2 km each way. On the plus side, you encounter a ton of cute monkeys along the path: 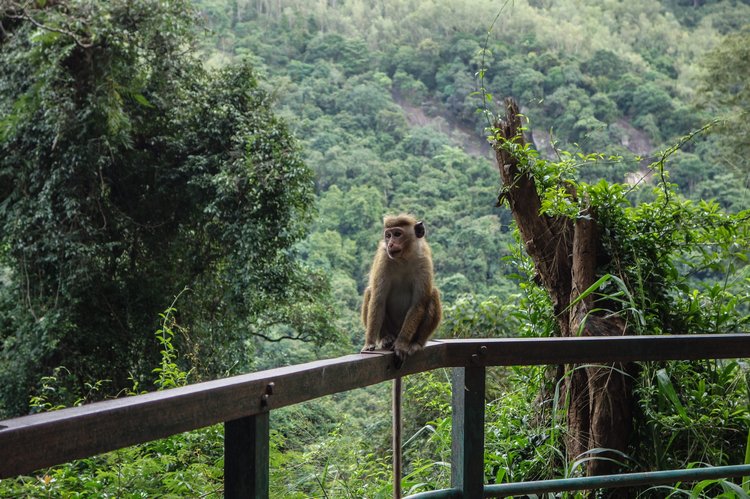 Caught this naughty boy clearly playing with his penis. You can see the shame on his face: 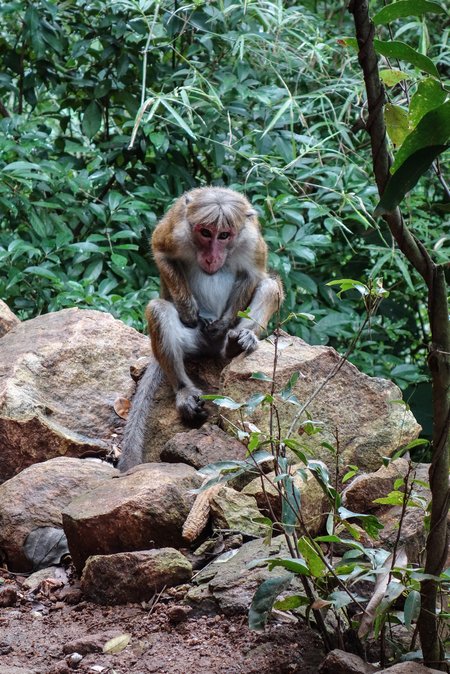 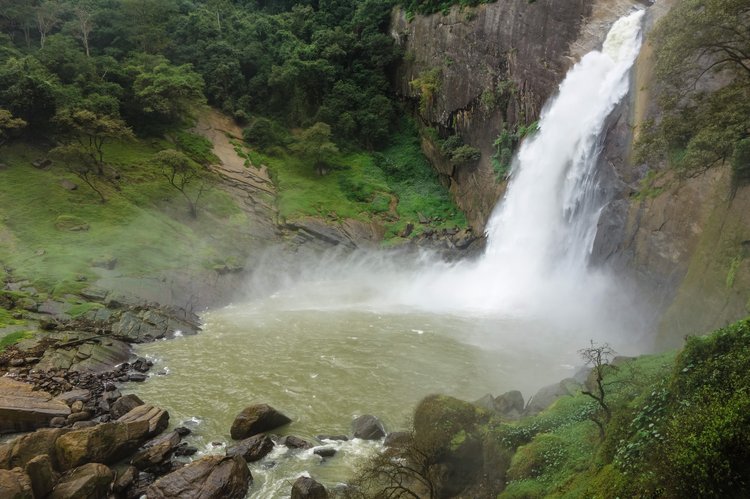 Picture from the walk back:

By this time it was close to 2:00 pm and I’d had no lunch so I decided to risk some snacks by the exit to the falls. I started with some corn given that I had been dying to try it for a while. Conclusion, I have no idea why, but the corn in Sri Lanka tastes awful (tried it two times since, same conclusion). It looks juicy and sweet, but it tastes like cardboard. It’s like a nutritionist took a hold of normal corn and made it taste like health food. Fortunately, I also ate a bag of cut mango slices with chili pepper as course number two which was delightful. And I am happy to report that I got sick from neither.

Once I was back in Badulla I took a quick walk around the town to check out two churches near the centre of town: 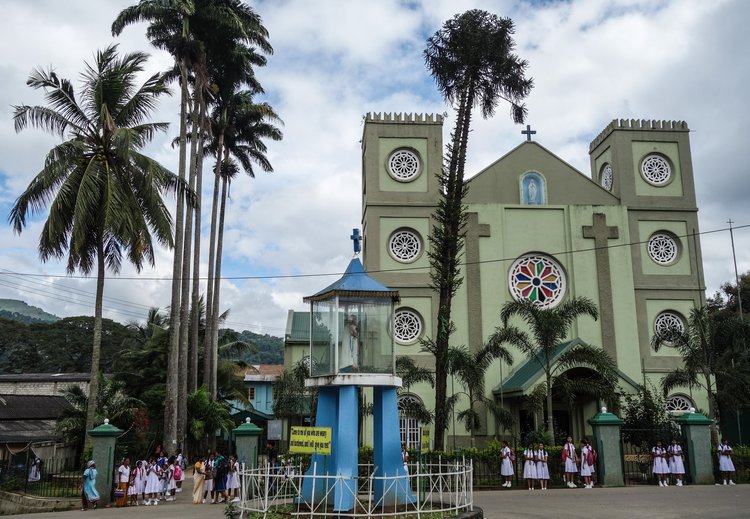 My bus ride back was certainly more of an ordeal than the way in. On the positive side, before boarding the first bus, I discovered the absolute highlight of food in Sri Lanka–the bakeries. I was still peckish after the light lunch so I stopped by a bakery to check out some savory goods. Honest to god, these are some of the best savory baked treats I have ever had. In particular, in one bakery I found a samosa which has definitely been the best samosa I’ve eaten in my life, India included. I know of pastry chefs that would probably commit a few murders AND sell their souls to the devil to be able to duplicate that pastry shell. The best part is that they are super cheap, we’re talking 30 cents a piece.

But then came the bus ride. Getting to Bandarawella was fine enough, it only took an hour, but the 10 minute ride into town from the hotel with the husband turned into a 1.5 hour ride on the way back. Worst yet, my GPS crapped out on me right before my destination causing me to overshoot my stop by 1 km. And then it started to rain about 10 minutes into my 3 km walk back to the hotel. Fortunately I found a tuk tuk on the way (which is frankly a miracle given the remote location) so $1 CDN saved me most of those kilometres in the rain.

I’ll finish this post with a shot from my room’s balcony upon my departure to Kandy the following morning: 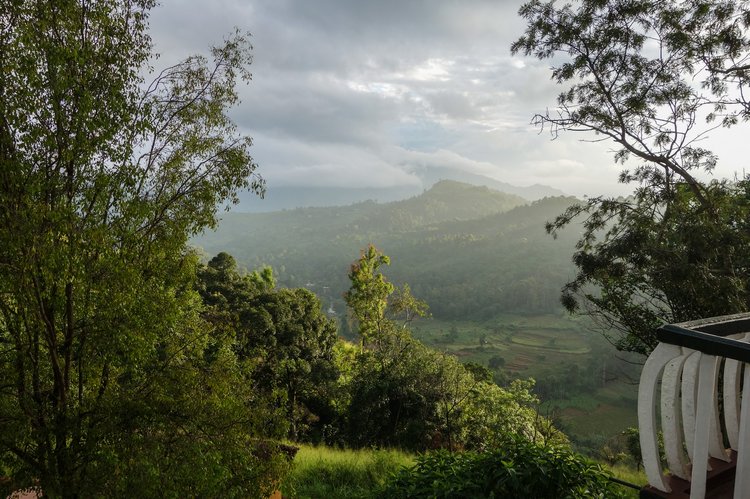