We arrived in Mumbai around 2:00 pm, and by this point I had a number of errands to run and some computer back-ups to conduct so I didn’t end up doing much on the first day.

Some general observations about Mumbai to commence. The city is one of the most expensive in India in terms of hotels and other tourist services and amenities. Bars catering to the professional classes routinely charge Toronto/NYC prices for drinks and food, albeit at a much higher level of quality and originality for the price. However, an odd thing about the city is that it has no motorized rickshaws, and the taxis are extraordinarily cheap–a 2 km ride in a taxi will only set you back about $30 Rupees (60 cents CDN).

A few pictures from our first day in and our night out at a bar in the Colaba neighbourhood: 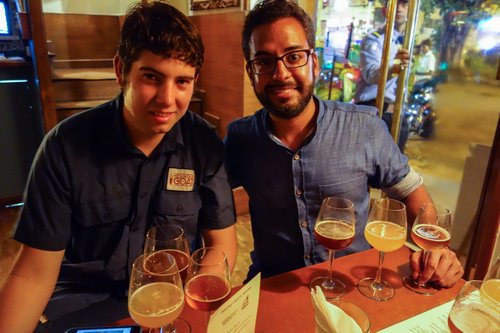 The following day I decided to venture out solo on an architectural tour of the city. I love the look of Mumbai with its colonial buildings that are a little run down, but in a charming way that just brings out lush vegetation. For those of you have been to Mexico city, Mumbai reminds me of the look of my favourite neighbourhood en el D.F., La Condesa: 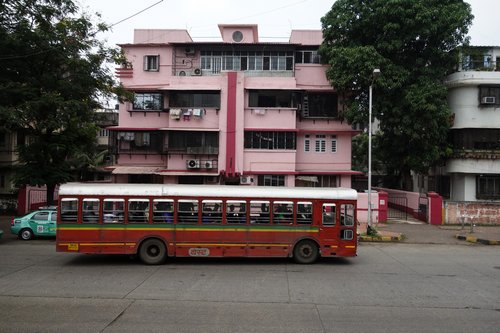 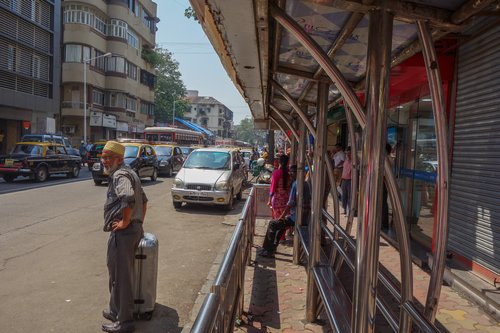 Right after I did a little bit of exploring near our hotel, I went to the coast to start up the architectural walk laid out in my Lonely Planet book. However, I noticed that immediately to the right (the starting point of the walking tour was to the left, by the Gateway of India), there was a lovely fisherman’s “slum” as it is colloquialy known. I would hardly call it a slum, the homes are mostly made of concrete and are very well maintained. The only slumish aspects to the area are the very narrow roads, so narrow that most of the above-ground floors need to be accessed by external metal ladders: 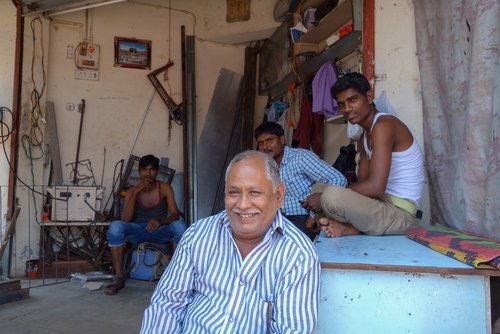 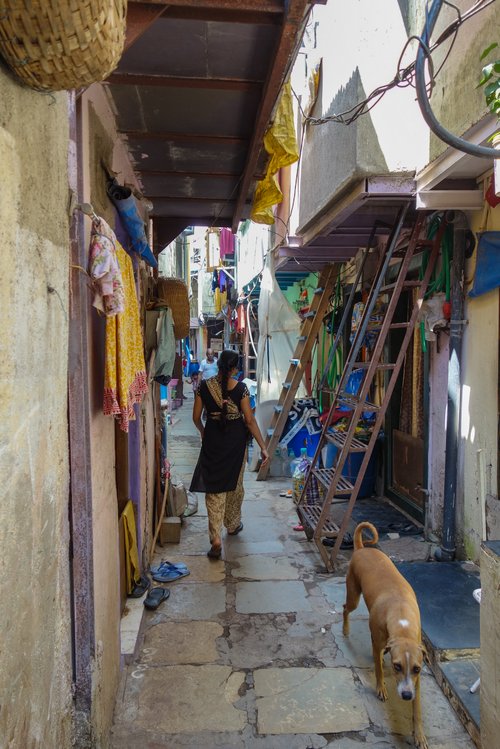 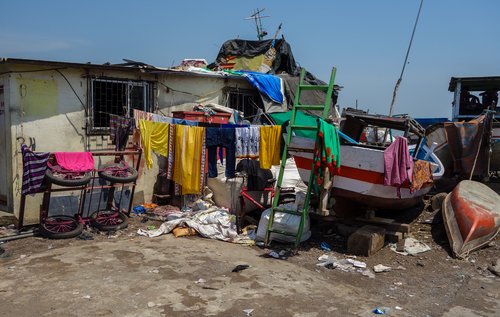 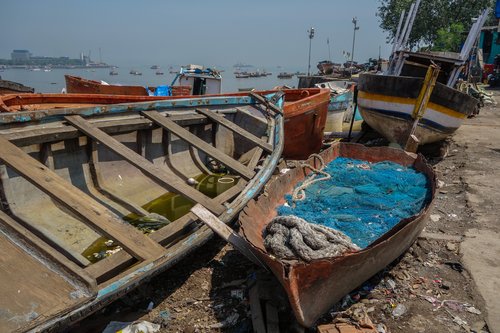 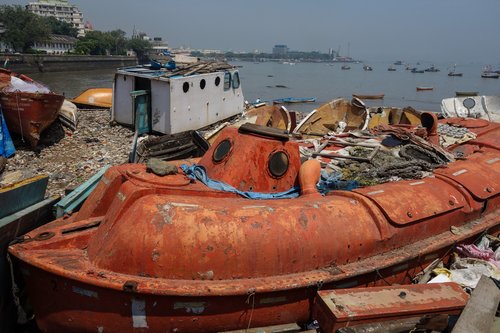 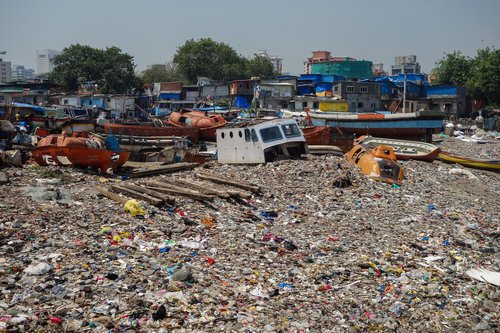 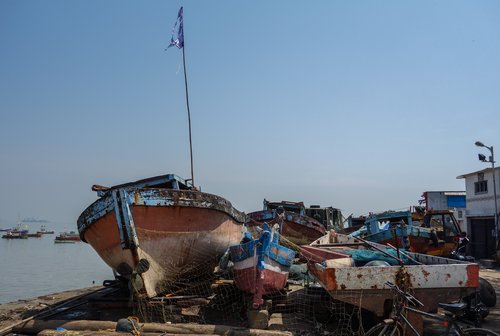 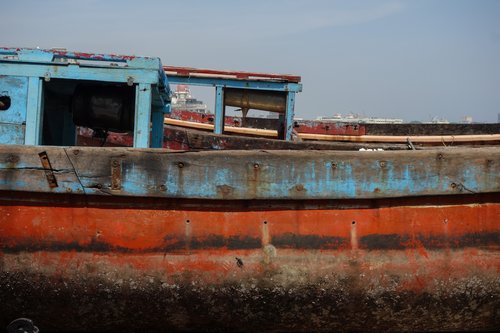 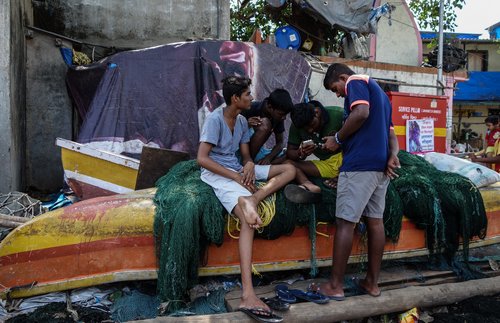 After exiting the fisherman’s neighbourhood I continued north towards the starting point of the walking tour. Right across the street from the Gateway of India is the Taj Mahal Palace hotel. The hotel was built by a rich Indian industrialist in 1903 after he was refused entry into a fancy western hotel on account of being Indian. Sadly, this was also the main site of the Mumbai terrorist attacks in 2008:

The structure depicted below is the Gateway of India, built to commemorate the royal visit of King George V in 1911 (it was completed in 1924). The last British regiment in India paraded through this gateway in the days leading up to Indian independence in 1947:

The harbour surrounding the Gateway: 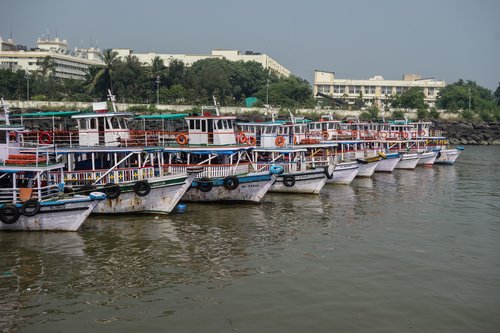 The walking tour took me west and then north. A picture of a kid just outside of the Prince of Wales Museum:

Near the museum, at the Ninand Cold Drink Centre, this jolly fellow was selling the sandwiches pictured below called “dabel”. They consist of a spicy potato filling with a masala tomato paste, sweet chutney and some crunchy bits for texture. They fry the outside of the sandwich in butter when you order one. Not quite as tasty as the description would suggest, but definitely worth trying:

Another picture along my walking tour: 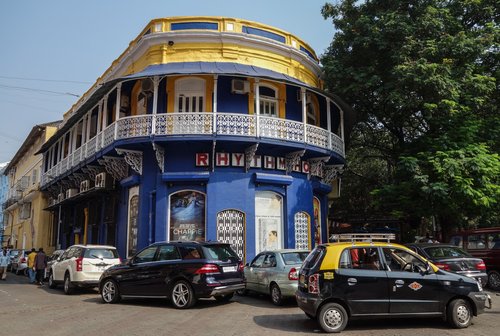 The building pictured below is the High Court of Mumbai which is extremely difficult to properly photograph. Cameras are not allowed inside and the periphery of the huge court is completely surrounded by huge trees, fences and assorted vegetation. However, they actively encourage visitors to the court and it is well worth it to pop inside and wander the corridors, especially if you’re a lawyer.

The building dates back to the 1770’s and it is built in the Neogothic style. High Courts in India are conducted entirely in English, and appear to follow many of the same customs and evidentiary rules of legal systems in the Commonwealth. I noticed that the gowns worn are pretty much identical to the gowns worn in Canada, the main difference in attire being that women tend to wear sandals in court.

I spent the better part of three hours wandering the halls and checking out proceedings, and in particular I spent about two hours listening to a criminal appeal. From my brief observations, it looks like they argue about much of the same technical nonsense that we get fixated with in Canada. The only surprise was that I am almost certain that one chunk of the appeal was in the form of a habeas corpus application which is highly unusual. For those of you not versed in law, habeas corpus applications typically get you nowhere. The state is just required to bring the person before the court and provide a legal justification for having the person in custody, which aside from a blatant breach of the law (e.g. not getting the person in front of a judicial officer within the time period prescribed by Parliament) is an easy burden to meet. I subsequently talked to an Indian criminal defence lawyer about the motion and she found it surprising that a part of the appeal was filed as a habeas application. That being said, three-quarters of the defence appeal focused solely on signatures and the chain of custody with respect to some cigarette butts found at the scene of the crime.

From my estimate a good 40% of the lawyers present in court that day were women, which is very encouraging for India. I will say that in my interaction with middle-class folk, women are well-represented in the professional classes. As a lawyer, I also found it interesting that counsel, in this case the prosecutors, would routinely talk to the judge from a seated position–in fact I never saw the female prosecutor and her male colleague on their feet and some of their exchanges with the judge lasted as long as a minute. And, absolutely no one is shy about interrupting a judge mid-sentence. Another notable difference is that they refer to judges as “Your Worship” (in Ontario we refer to Justices of the Peace in that way, not judges), and absolutely everything is done on paper–in fact the ground in the court is littered with stacks and stacks of paper bound loosely with red string. This is actually rather odd because Indians, rich and poor, have excellent access to technology. As I’ve noted earlier, I’ve seen farmers in remote villages with smart phones. Given that absolutely no one in Court had a laptop, I think that there may be an actual rule prohibiting the use of computers in court. Well, except for the court clerk, the clerk was the only one with a computer in Court. 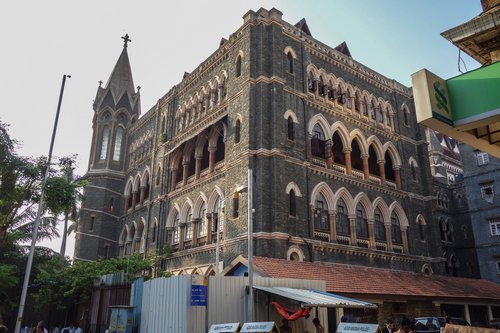 After my extended visit to the Court, I continued on with the walking tour. The amazing Art Deco building below is the headquarters for an insurance company:

An electronics repairman working out of a stall in a narrow hall of merchants:

The Cathedral pictured below is St. Thomas’ Cathedral which was constructed between 1672 and 1718, and is the oldest British building that is still standing in the city. The church is apparently a mixture of Byzantine and colonial-era architectural styles, though I will confess that I am unable to see elements of the former:

A picture of the flying buttresses (they are hidden behind a big fence and visitors are not permitted to walk around the cathedral from inside the grounds which is architectural blasphemy in my opinion): 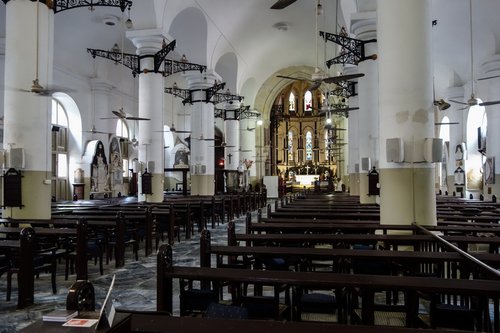 Photos of people and buildings that I found interesting during the remainder of my walk: 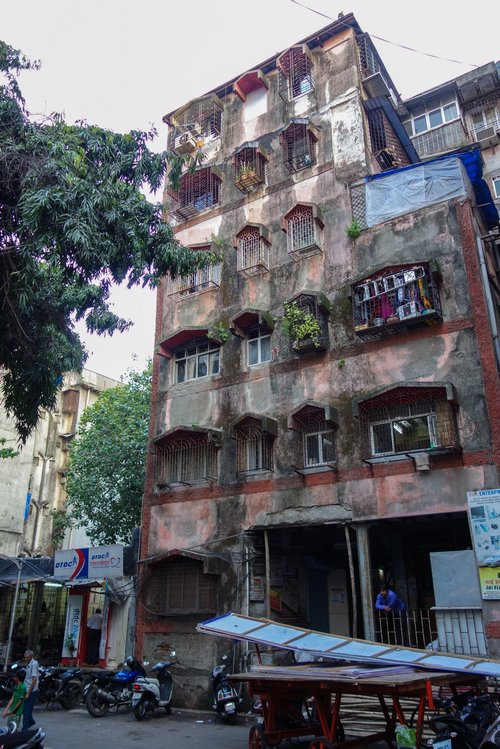 The lovely train station and the bus station next to it:

That night we ended up at Colaba Social which has to be one of the coolest bars I have ever attended. The drinks are about $10 CDN a pop (ask for well liquor or you’ll get stuck with $14 CDN drinks), but they are really imaginative and absolutely delicious. All are served in special glasses matching the particular concoction and the food is brilliant as well, featuring things like pork belly pops, and amazing tandori dishes. My favourite drink was a vodka drink made with pickle juice, a delicious spice mix and crushed ice. Their Moscow Mule is topped off with dry ice. To top it all off, the decor is fantastic: 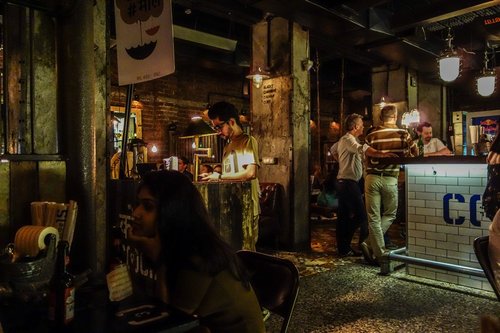 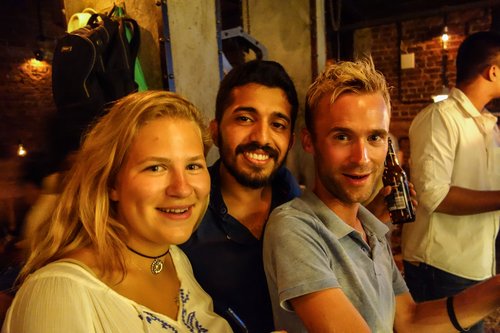 The chair felt quite regal so I just went with it: 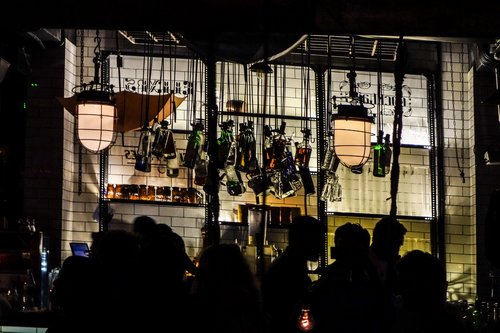 A lawyer couple that we met at the bar. I kept trying to ask them all sorts of questions about the Indian criminal justice system, but apparently after working an 80 hour week, some people don’t want to talk about work. The nerve! 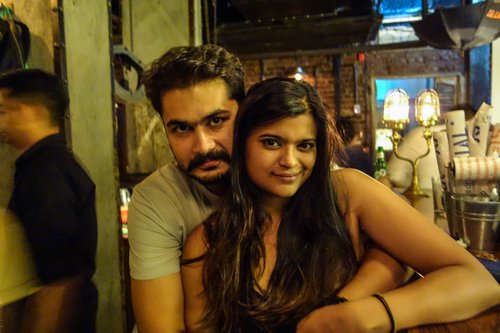 The following morning I decided to visit Elephanta Island which is just a 9 km boat ride from the Gateway of India. That being said, the ride somehow ends up taking the better part of 45 minutes, more if you have to wait a while for the boat to depart. Crossing over will only set you back about $120 Rupees ($2.50 CDN) with a $10 Rupee upgrade if you want to sit on the second floor (unadvisable because the shade is better on the lower deck). Some photos from the boat ride across: 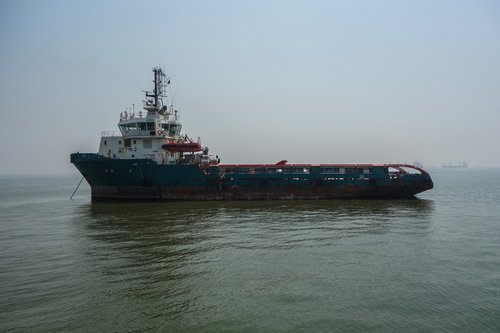 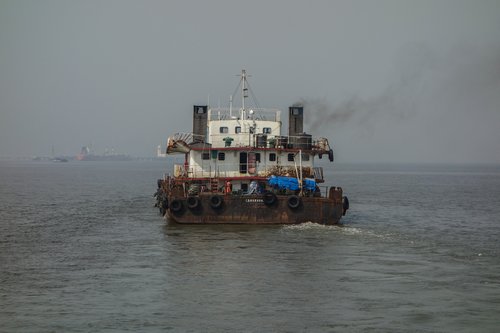 Elephanta Island is famous for its cave temples, making it a Unesco World Heritage site, albeit pretty disappointing if you’ve previously visited the caves at Elora and Ajanta. The caves are from the time period roughly between 450 C.E. and 750 C.E. and the island was given its name because there was a large elephant sculpture near the shore. The temples are Hindu temples dedicated to Shiva. As you can see below a little train takes you the 1 km or so to the stairway that leads up to the caves. Excuse the silly hat, it was ridiculously hot and sunny in Mumbai: 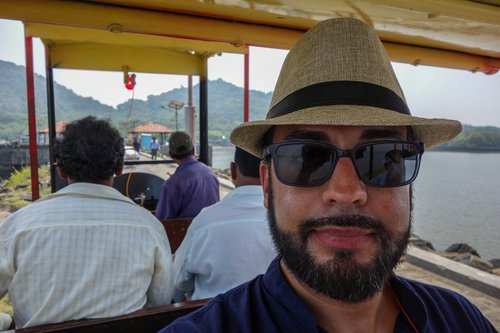 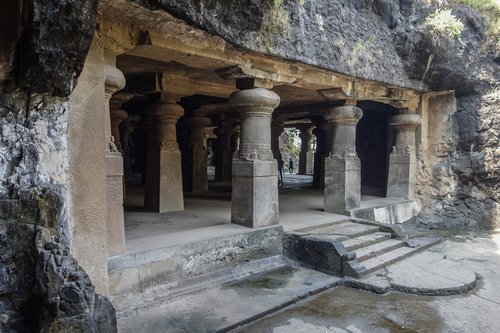 There are a lot more caves but given my previous post, I decided to keep the cave pictures to a minimum.

The cave sculpture below is particularly interesting and is the main attraction. It depicts a three faced Shiva, showing him as the creator, preserver and destroyer of the universe:

It is also worthwhile to take 20 minutes or so to walk down to the lake area on the island:

For dinner I joined up with Flo and Josh to check out the second restaurant/bar by the owners of the Colaba Social. This place is called the Todi Social, which is about a 40 minute drive from the High Court with traffic, 10-15 minutes without. We feasted on a dish with dates and Goan sausage (not as good as it sounds), some tasty croquets, jalapeno poppers, and tika chicken tacos. I also encountered a hilarious bit of Indian bureaucracy. There was a private party on the second floor to the joint, with a bouncer guarding the stairway. Initially he was totally prepared to let me in because I was fairly well dressed, but instead I asked him if I could just take a picture from the landing. He said no. The landing was literally 30 centimeters off the ground, and about 50 centimetres behind from where he was standing. The refusal was so absurd that I kept asking him why not and he was obviously unable to provide an answer. I then just lifted my camera above my head and took the bloody picture from where I was standing, in front of the bouncer. 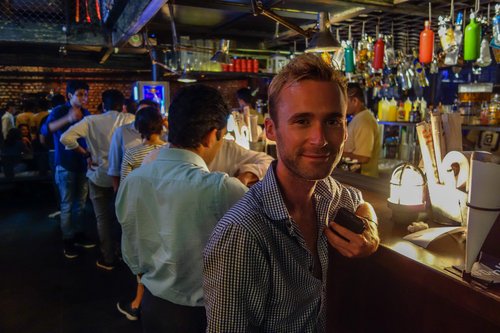 The photo I argued over: 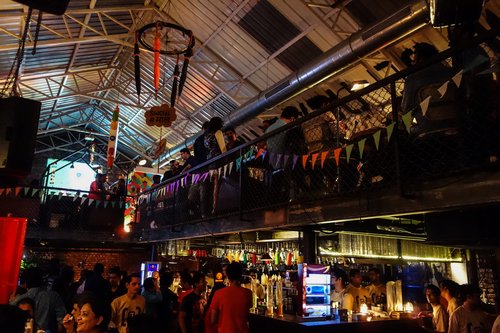 I’ll finish my post on Mumbai with a shot of the very cool medicine-like jars that they serve their fancy (and delicious) shots in at the bar: 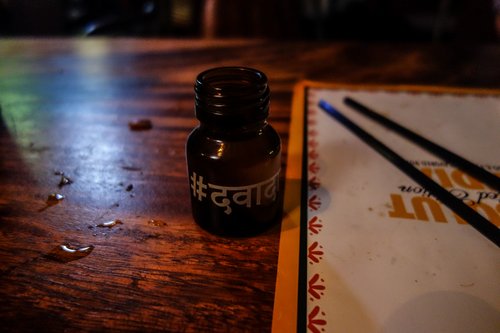