The day started with another 5:30 am start as we were still quite a distance away from the Ajanta caves. On this particular occasion I was totally fine with the early start given that I could not sleep a wink in the humidity of the tents.

We made it into town around noon, and after a quick lunch we headed to the caves. Ajanta houses a number of Buddhist caves that were carved out of the rock face between the 2nd century B.C.E. and the 6th century C.E. The nearby caves at Elora are newer and accordingly do have more impressive structures carved out of the stone, but Ajanta is known in particular for its impressive cave paintings. The caves at Elora are the most recent of the two, and historians currently posit that the Ajanta caves were abandoned when the focus shifted to the latter set of caves. The Ajanta caves were reclaimed by the wilderness soon after and not were not uncovered until a British hunting party ran across them in 1819.

As I noted above, the caves were carved out of the rock face, a phrase that doesn’t adequately capture the enormity of the venture. That literally means that everything–the columns, the intricate ceilings and floors, and all of the sculptures are made from a single piece of stone, namely the rock face. An untouched portion of this huge rock face will give you an impression of what they started with:

Below is a picture of the various caves from far away, there are a total of 30 separate caves, though many are closed for renovation or are otherwise inaccessible:

In the photo below you start to get a sense of the impressive nature of the endeavour. You can see how the rock face above has gradually been sculpted down into an intricate columnade:

The Ajanta caves are known for the phenomenally well preserved cave paintings. The paintings have the look of frescos (which are painted onto wet plaster and therefore typically have more permanence than murals once the walls dry) but they are actually temperas. The artists used natural pigments and some sort of vegetable gums and animal glues to ensure that the pigments would bind to the walls.

The shot below is from one of the side panels, you can also see an intricate column behind:

Even the ceilings have elaborate paintings:

At the rear of the more recent caves, they have statues of Buddha either depicting him in the teaching pose (as shown below with his hand elevated) or in the meditative pose with both hands down:

Paintings on the columns: 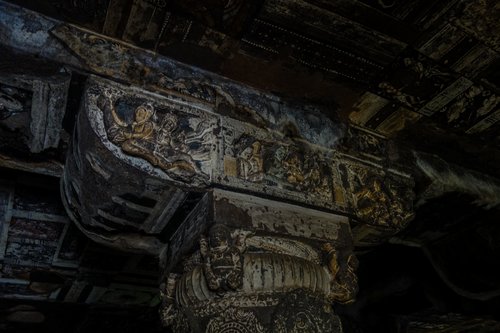 The photo below shows a Buddha sculpture from another cave, again in the teaching pose. One of the nice things about Ajanta is that the pigment friendly lighting that they employ gives everything a nice glow. The lighting in Elora is not nearly as nice. However, you’ll likely be unable to take photos inside unless your camera can handle low-lighting conditions well:

The obligatory proof-of-life selfie. This picture was taken off to the side by where the caves end. As you can tell the lush vegetation hid the caves well over the centuries, thus helping to preserve the structures and paintings:

Some of the decorative carvings on the columns can be particularly intricate: 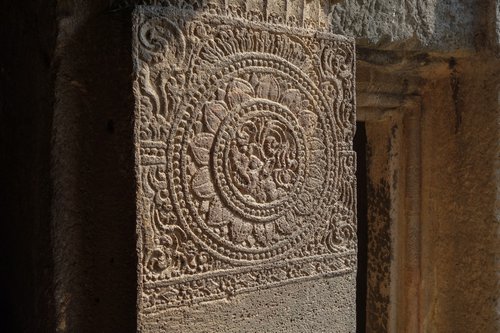 As I noted above, the newer (being a relative term) caves have Buddha sculptures at the rear, but the older ones such as the one depicted below are more austere and do not depict Buddha. Buddha is instead symbolized by the large structure shown below: 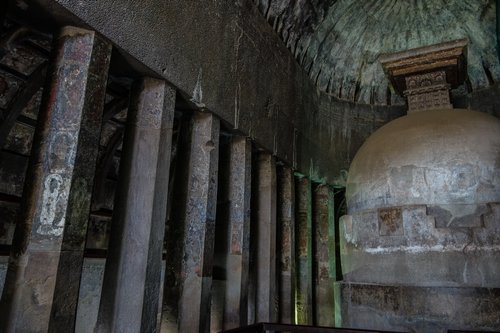 In this wall painting you can see that the colours are still remarkably well preserved, notwithstanding the fact that they are near the front of the cave and are thus exposed to direct sunlight. I would be surprised to see a modern mural with such vibrant colours even 100 years in, let alone 1,600 years later. 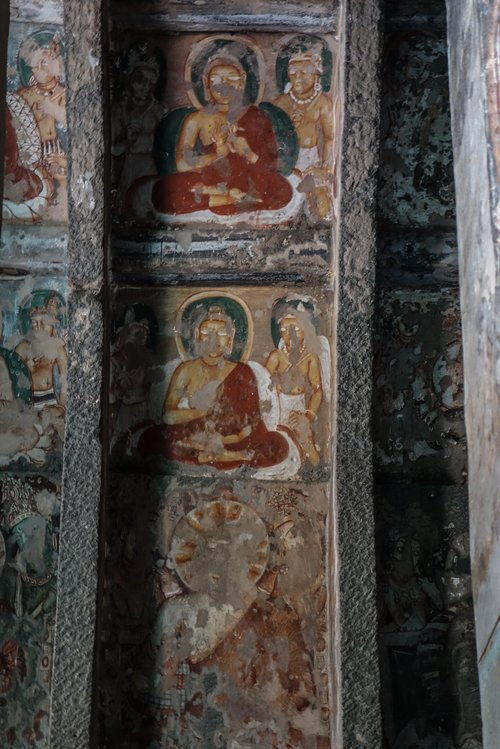 Assorted photographs from the caves at Ajanta:

The sculpture below is particularly unique as it is one of the few friezes in the world depicting Buddha on his side just prior to death. The figure is absolutely huge, making it nearly impossible to fit the whole thing in a single photo: 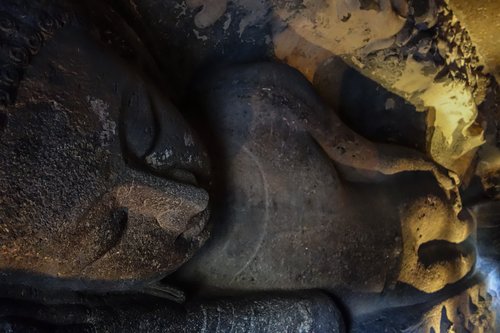 After visiting the caves we returned to our campsite, again off a highway, thus I opted for an “upgrade.” Now, I have recently realized that I typically only post photos of the nice hotels that I have encountered in my travels, which may lead to an inaccurate impression of what to expect in India. Most of the hotels are fine, but the cleanliness levels can be suspect, especially in the south below Mumbai (i.e. the lower third of the country). I’m writing this post two months into my time in India (I’m about 28 days behind in my blogging given the volume of photos), and I would have to estimate that I end up using my silk sleeping bag liner one third of the time either due to concerns about insects (bed bugs in particular) or because the sheets do not seem clean.

Below are some pictures of the room that I opted for instead of camping by the side of the road:

On the bright side, there was a camel parked right outside my balcony which is not something you get to see every day outside of India. Even though it looks like the bathroom hadn’t been cleaned in years, the upgrade was still way better than camping by the side of a highway: 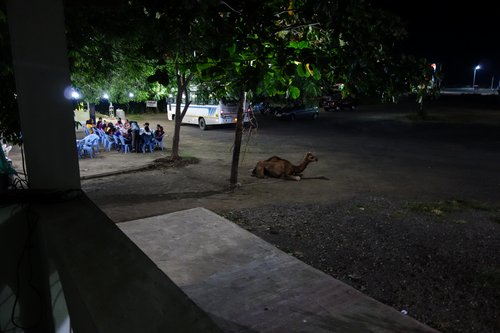 Once again, we departed for the Elora caves very early. There are some advantages to hitting the road early: 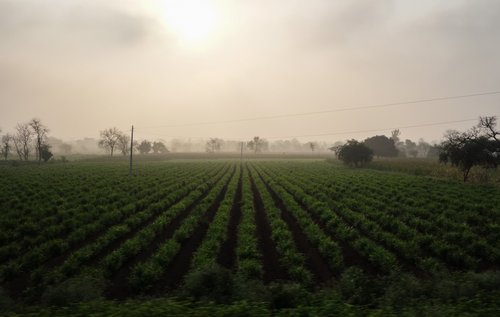 The caves at Ajanta house temples, monasteries and chapels from three of the four major Indian religions. There are twelve Buddhist caves dating from 600-800 C.E., seventeen Hindu caves from 600-900 C.E., and five Jain caves from 800-1000 C.E. The caves at Elora were carved out of sheer rock face (making them all the more impressive) whereas these caves were carved out of a 2 km long escarpment with narrow slopes ending at ground level. The narrow slopes allowed for the architects to build gardens and elaborate entry-areas in front of the various temples, and the relative ease of carving near the ground meant that they could achieve more elaborate facades for the temples.

Below is a picture of one of the temples that has a deep recess allowing for a decorated entry-area (damaged by now): 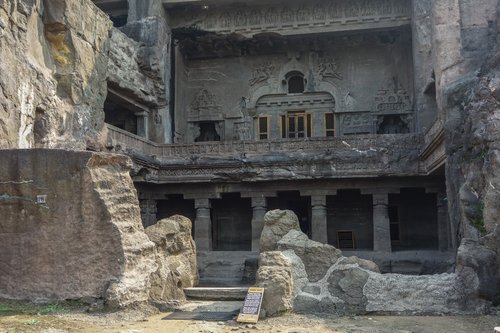 One of the Buddhist cave temples, note the impressive ribbed ceiling reminiscent of European churches. It is thought that the recesses between the ribs were once fitted with wooden panels:

Close-up of the Buddha carving in the same cave, here in the teaching position once again: 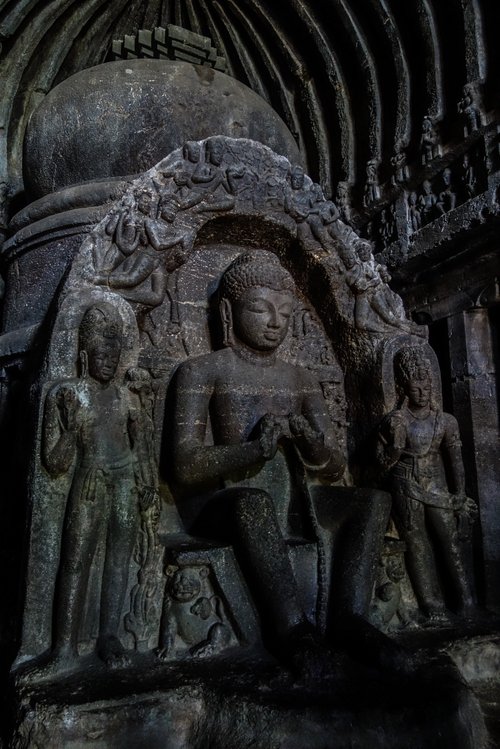 A photo of Kieran, Josh and Flo in front of some of the greenery near the caves: 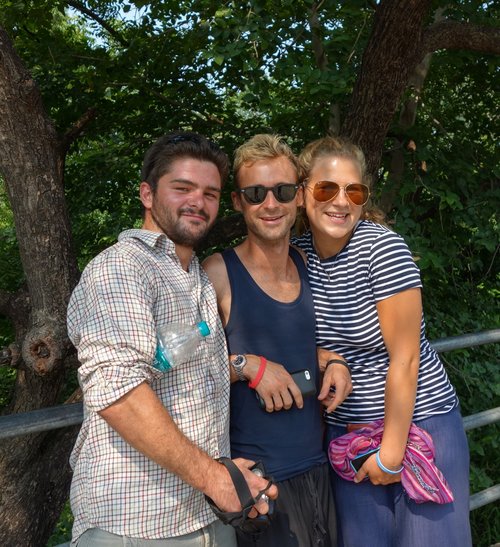 Inside one of the Buddhist caves. As you can tell they are much longer and wider at Elora than at Ajanta: 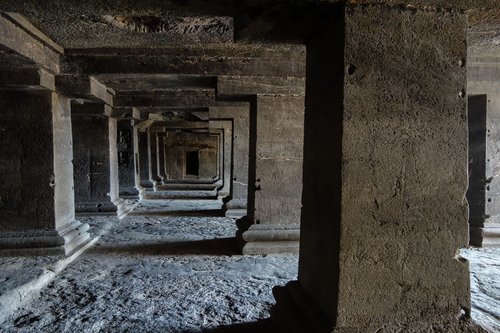 The fellow depicted below was near the stairwell in the same Buddhist temple, and he was praying at the time. I was told by our guide that he is in fact a member of a particular Hindu sect that worships a specific prophet. Because it is said that this prophet once visited this temple, his disciples come to the temple to follow in his footsteps, though they quite literally avoid doing so. I saw that this particular pilgrim walked along the elevated areas beside the main pathway, and our guide explained that he was avoiding walking anywhere the prophet would have likely walked because it would have been blasphemous to do so. 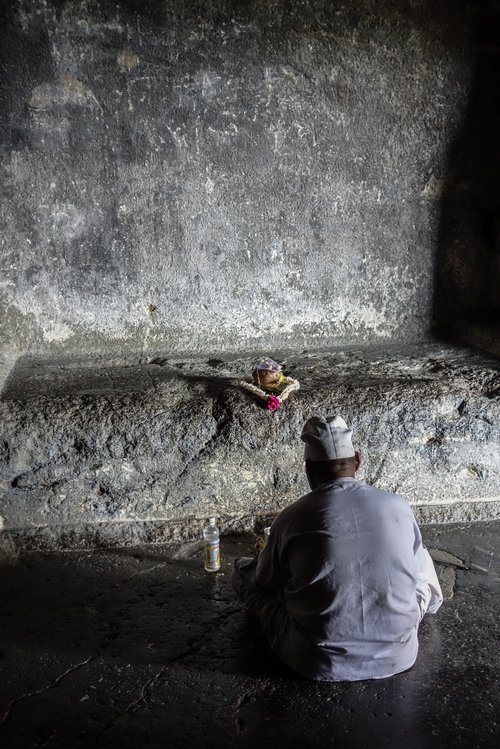 The structure pictured below is the Kailasa Temple which was commissioned by King Krishna I of the Rashtrakuta dynasty. The construction started in 760 C.E. and took 7000 labourers 150 years to complete. This temple is the largest monolithic temple in the world (meaning carved out of a single rock face) and it was dedicated to Lord Shiva. It is estimated that over 200,000 tones of rock were removed from the rock face in the process of carving out the temple. 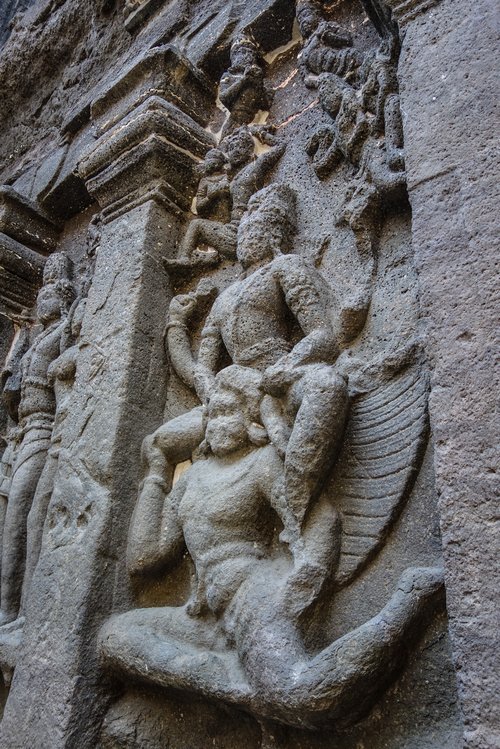 I’ll finish by commenting upon the relative strengths of the Ajanta vs. Elora caves in case you only have time to visit one set of caves. Lonely Planet advises going to the Elora caves if you are short on time but I would have to disagree. With the exception of the enormous Kailasa Temple at Elora, I was far more impressed by the caves at Ajanta. For one the paintings are absolutely remarkable both in their level of preservation and also in the artistic maturity of the depictions of human figures: artists in Europe were not achieving these results anywhere near the 5th century C.E. Second, the lighting in the Ajanta caves is superior, in particular the colour of the pigment-friendly lighting casts a lovely bluish-green hue over the Buddha statues. Lastly, the setting of the Ajanta caves in that lush rock face is far more picturesque than the setting of the caves at Elora. However, if you have the time, it is well worth it to see both sets of caves.

One thought on “Ajanta & Elora Caves”