After 18+ hours in the air and a lot of waiting in between, I have finally arrived in Kathmandu.

I am very glad that I shelled out the cash for the hotel stay as I would have otherwise been a zombie and wasted the day today. Instead, I woke up feeling remarkably refreshed even on 4 hours of sleep, though I am expecting a crash within a few hours.

Anyways, the flight was fairly unremarkable, aside from the fact that there were very few tourists on the plane considering the prominence of tourism in the economy of Nepal. But then again it is monsoon season, so not exactly the best time for trekking. As far as I could tell it seems like most of the plane was filled with Nepalese workers coming back home for a visit.

A brief aside about the airline meal, nothing particularly remarkable aside from the water bottle which I found adorable:

Love the name, sounds very refreshing. But my favourite part of the bottle is that the water is sourced at the Himalayas, with a secret platoon of penguins guarding the source.

The Kathmandu airport looks pretty dated, and is one of those airports where you disembark directly onto the tarmac and get taken to the main building via bus. It’s been a while since I did that.

For those of you who are interested, the visa process is pretty simple. It looks like the standard visa is for 30 days and costs USD$25 to purchase at the airport. And I’ve got to say the immigration fellow definitely rates as one of the friendliest I’ve ever encountered. He actually looked excited for me when I told him that I’ve never been to Nepal before.

Taxis appear to be fairly inexpensive. It was about a 20 minute ride to my hotel and came out to 800 Nepalese Rupees which works out to about CDN$10. However, I did get both a driver and a tourist guide on the ride, with the latter giving me a pretty hard sell about hiring his services for some tours around the city. Oh and on his request, by the end of the taxi ride we were FB friends.

The hotel is quaint, decorated in a Tibetan theme (it is the Hotel Tibet after all). I’ve got no complaints about the room, it’s just simple and clean:

And the place has a nice little patio where you can eat or just have a drink. I sat there to gather my bearings a bit and make plans for the coming days. 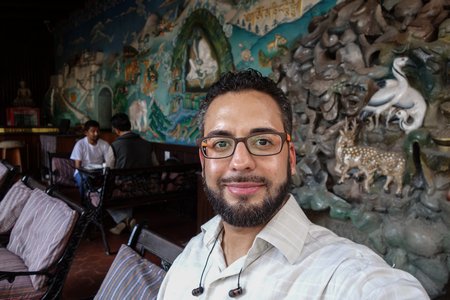 In terms of my first impressions of Kathmandu, it is a bit of a strange city in so far as it is really quite populous with a head count of 2.5 million, yet it feels like a very small town. The streets are extremely narrow, and as far as I can tell there are no traffic lights in the city; the major intersections have a traffic officer wearing white gloves on an elevated little platform directing traffic. There are also very few high rises, and it appears that the few are mostly hotels. The only indication that the city is big is that the streets are very smoggy. I would say that 90% of people on motor bikes were wearing some sort of mask or bandanna around their nose and mouth, likewise about 50% of pedestrians.

The city does look a little bit run down in the areas that I’ve seen so far, and unfortunately you can definitely see the signs of the recent earthquake. The former palace in particular suffered extensive damage. You can see that several walls were completely demolished and the rest have serious cracks every 15 metres or so. The extent of the damage is especially remarkable given that Kathmandu was not hit anywhere nearly as hard as other parts of the country.

My first meal in Nepal has consisted of vegetable jalfrezi with roti, washed down with some loose jasmine tea. Jalfrezi is a type of curry from South East Asia. Essentially the meat or vegetables are cooked in oil with spices, so you end up with a thick paste-like sauce. Just spicy enough to get my sweat on a bit:

Finally, I have been listening to the radio quite a bit, as I usually do when I visit foreign cities. I’m loving the fact that I can get multiple sources of Indian music all the time. The one strange thing, both here and in Delhi, is that they throw in a ton of English phrases into their ads. They also tend to advertise the radio stations’ frequencies in English for some reason.

I will continue updating as I explore the city further.

3 thoughts on “Finally in Nepal!”