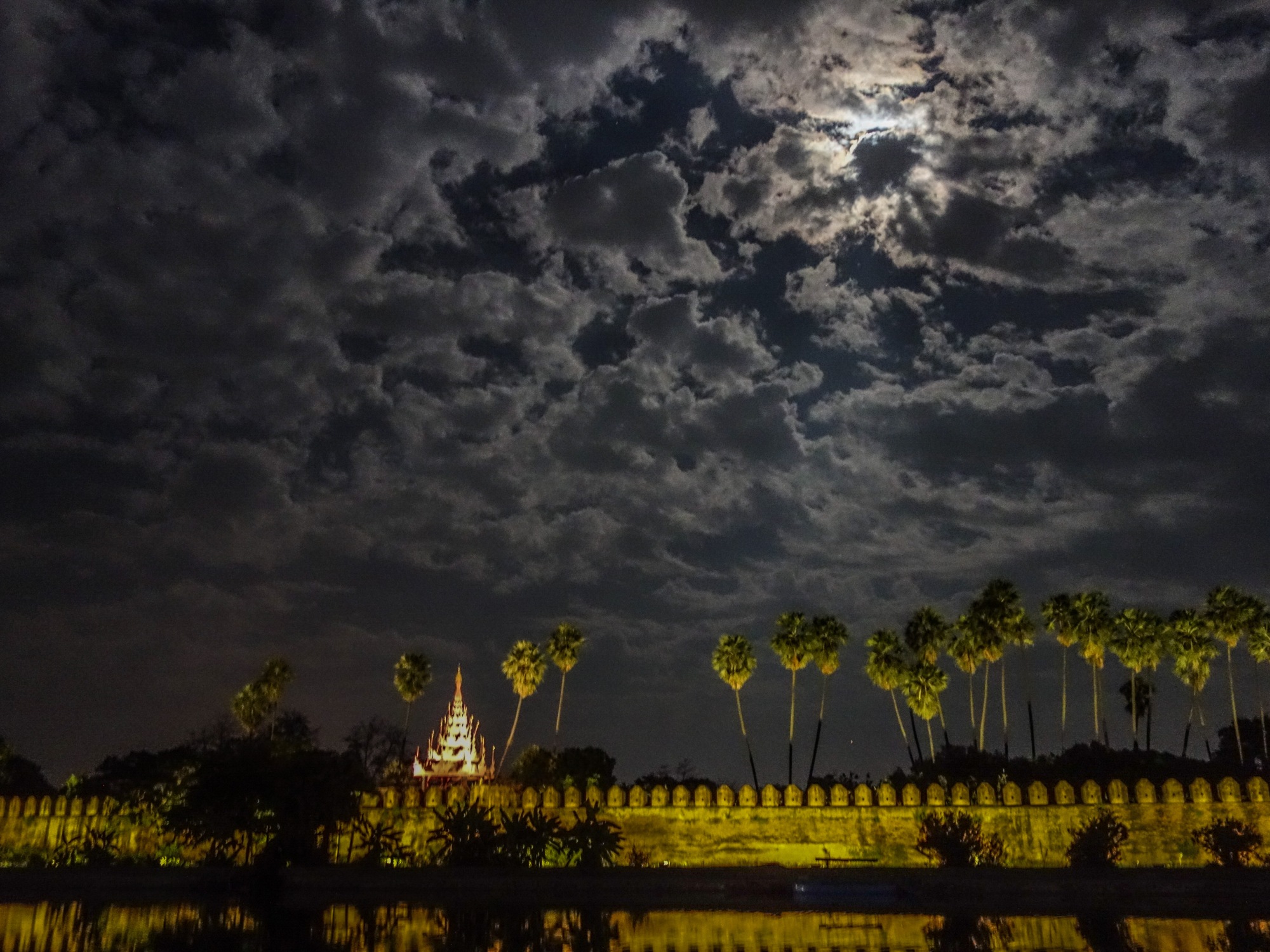 I spent a total of four nights in Mandalay but in three separate chunks–like Yangon I used it as a travel hub for visiting the smaller towns.

Not many people are enamoured with Mandalay because it is a lot quieter than Yangon in comparison. You also have to get that in terms of tourism, Mandalay isn’t about visiting the city itself, but rather about the lovely sights in the surrounding areas. In the city proper you really only have the pagoda on Mandalay Hill, the walls of the old city, and the Royal Palace therein, but even then I’ve yet to meet someone who thought that visiting the palace was worthwhile.

On my first stop in Mandalay, I arrived mid-afternoon so I just had time to go up to Mandalay Hill to catch the sunset. I actually really liked going up to the hill, if you pick the right spot, it’s a fantastic place to spend a few hours relaxing. Going up at a good clip takes around 30 minutes, but you can get dropped off near the top if you want to be lazy. As a side note, Mandalay doesn’t really do cabs, but there are a ton of motorcycle taxis around–no side-car or anything, you just hop on behind the driver. Good for single travelers not so much for those travelling with a companion. The view from the top:

As I said, the key to having a relaxing experience is picking the right spot. There are four spots along the way up where you can stop to watch the sunset. The key is not to go to the very top. The view isn’t much better than the lower levels, but it’s stupid crowded.

The crowded top (can you spot my dopleganger?):

I settled on a spot two levels from the top. Plenty of seating looking out onto the city. I really liked the tile work up there, it reminded me a bit of Gaudi:

I did end up spending a good two hours up there, up to the point where I was one of the last people to come down which was a good opportunity for some shots at night minus the crowds: 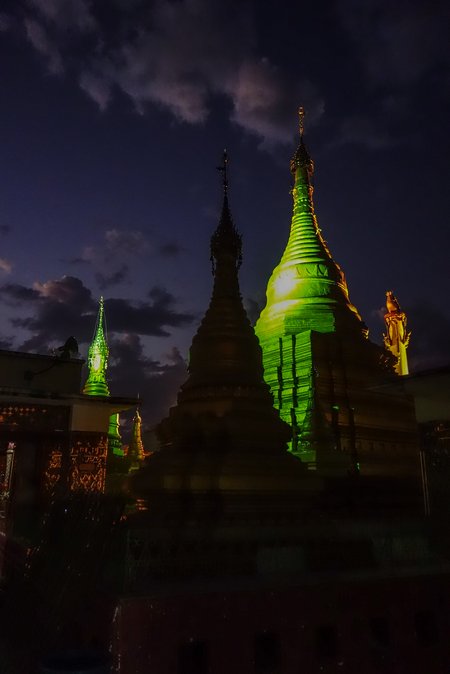 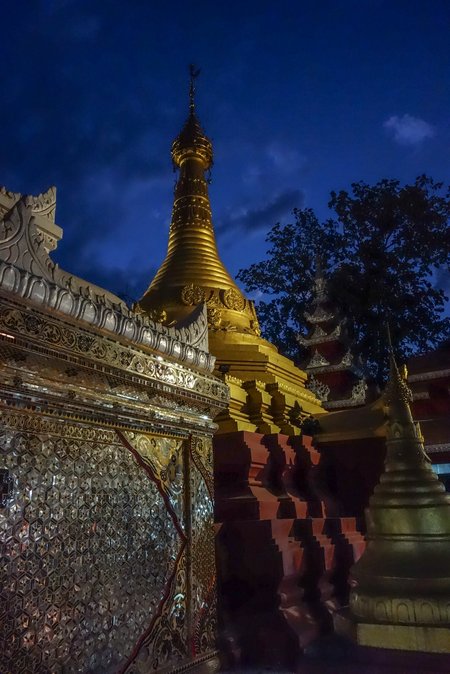 At the foot of there is a complex full of white pagodas which looks especially peaceful and lovely at night: 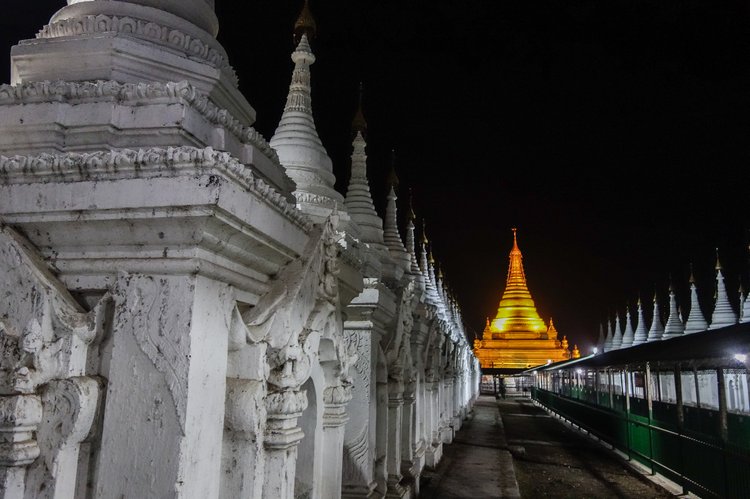 Across the street from that is the complete opposite, a park of kitchy illuminated structures: 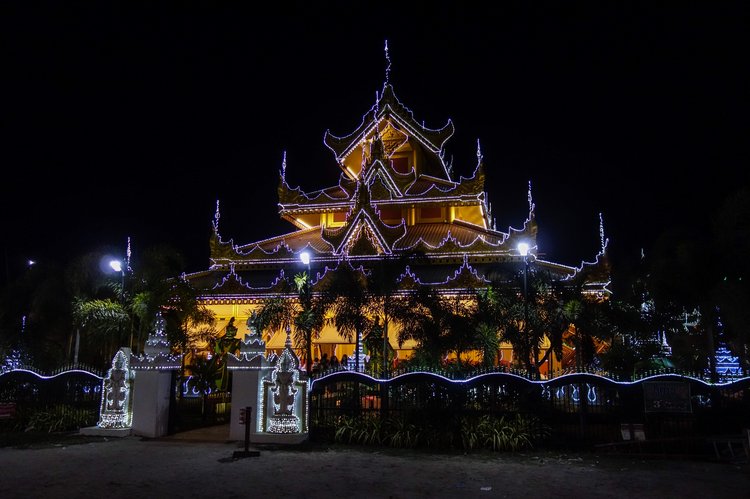 I literally walked about 12 kilometeres that night and I’m one of the few people that really got the charm of the city at night. Because the place is so quiet, you can have a very relaxing stroll along the walls of the old city which look absolutely stunning at night. My photos do not do it justice. Once you get past the moat at the middle of the city, the mostly residential streets are just lively enough so that you don’t feel unsafe, but quiet enough that you can have a peaceful stroll. The only downside to the city, is that there appear to be poorly sealed sewage corridors along the way, so if you walk near the sidewalk, it’s a little bit stinky. And, unfortunately the same streets that look nice and peaceful at night look like a drab blocks of uninteresting buildings during the way.

The moat and walls at night:

I returned just for another night a few days later. The royal palace was closed by the time I got into town so I just camped out at a funky restaurant to edit photos for the evening. On my next stop in town, I similarly had too little time in town to do anything so I spent the evening editing photos at the same place.

The MR2 Bar and Restaurant: 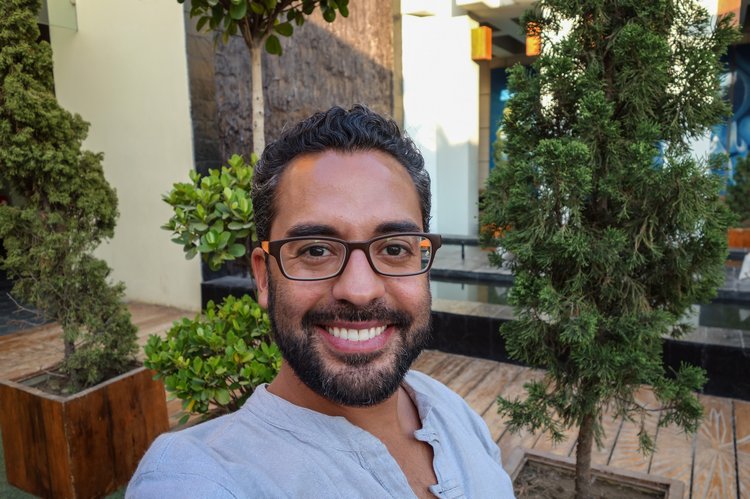 My flight out of Myanmar ultimately departed from Mandalay, so I spent my final two nights in the country in town. As I side note, the reason I flew to my next destination, Lao, is that you can’t cross the border overland between Myanmar and Lao. You actually can’t even fly directly into Lao, you have to bounce through Thailand.

This stay in Mandalay is where I finally got to explore the surrounding areas. Unfortunately as a solo traveler, and frankly short of being in a group of more than four people, the only economical way to check out the surrounding areas is to rent a motorcycle. I say this because over the course of my six hour tour, I ended up covering over 100 km–to hire a driver to take you around would cost far more than the $15-20 CDN it will cost you to rent a motorbike. Unfortunately, only about 3 hours of my time on the motorbike were particularly pretty. The other half of the ride was on uninteresting roads. However, the motorcycle rental was seamless–the Hotel A1 where I was staying lends out bikes for free and will also arrange for motorcycle rentals for a reasonable price (seriously nice rooms as well, for a pittance).

I started off by checking out the Mingun Bell which is about 10 km northwest of Mandalay as the crow flies. However, it is separated by a body of water, and the main bridge taking you there is 10 km south of the city, so it takes close to 2 hours to make it to the Bell, travelling at Andres speed (under 40 kmph). Once you get past the bridge, the road up north is the nice bit of the ride. If you want a direct route, there is a boat that goes across from Mandalay but it’s impractical because you ultimately do need a bike to check out the remaining sites around the city. 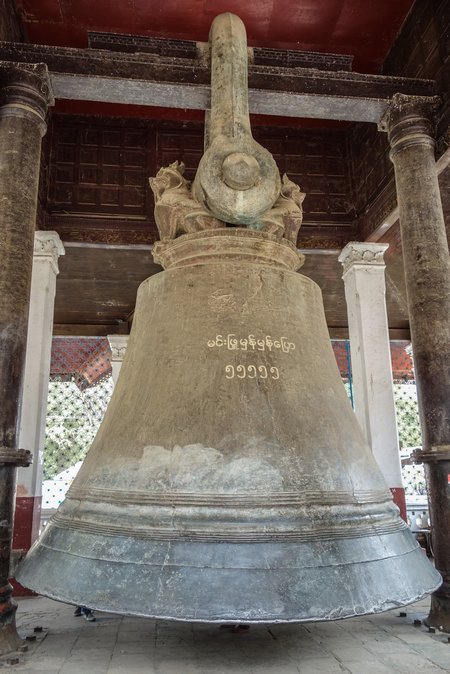 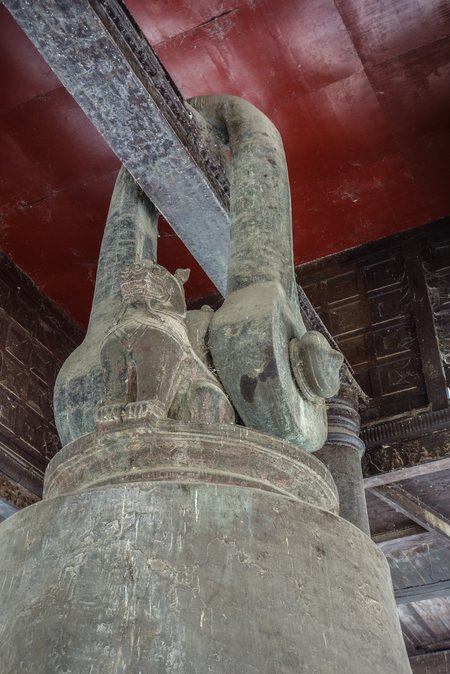 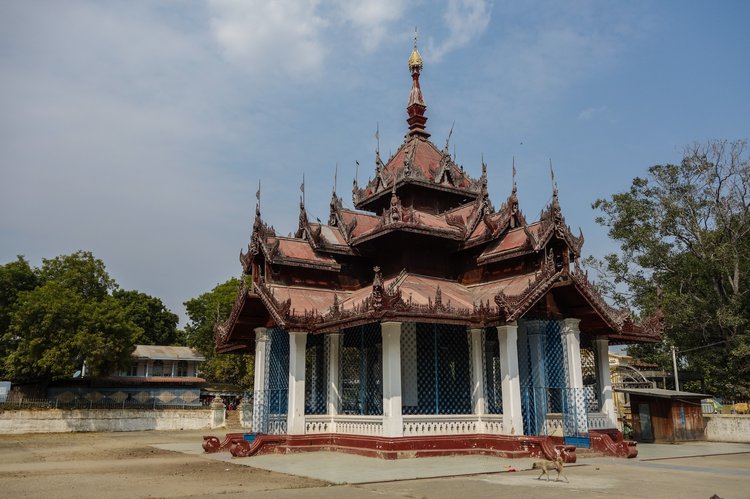 Some three hundred metres south of the bell is the Pa Hto Taw Gyi. Sadly it looks way cooler in postcards than it looked live. The structure was supposed to be a pagoda, started by King Bodawpaya in 1790, and had it been completed it would have been the tallest pagoda in the world (150 metres). It was not completed and the top portion collapsed in an earthquake. You do get some nice views from climbing to the top though: 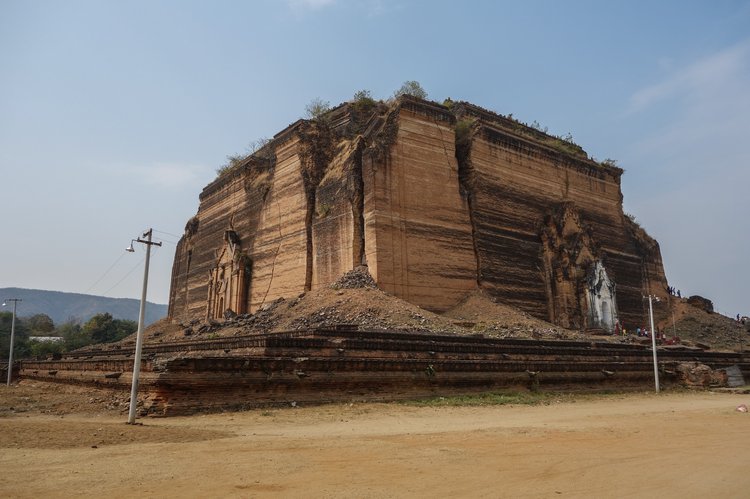 No idea what this is, it was across the street from the Pa Hto Taw Gyi:

From there, I rode south to the bridge and then east for 20 minutes to hit the pagoda at Sagaing. The pagoda dates back to 1648 and is unique in being egg-shaped as opposed to pyramid shaped:

Crossing the bridge from Mandalay to the region to the west is actually very pretty. It’s worthwhile to park your bike before crossing the bridge so that you can check out the lovely scenery. There are a bunch of boats and a ton of pagodas scattering the countryside:

My final stop for the day was the Pont U Bein in Amarapura, a town across the bridge and 10 km south of Mandalay. A five minute ride away from my destination I did hit an unfortunate snag–I went over a hard bump and all of a sudden my motorbike turned off and wouldn’t start again. Fortunately, there are a lot of motorbike repair shops around–I literally walked my bike less than 100 metres and hit a repair shop. Thirty-minutes and $3 CDN later, the bike was in perfect working order.

I made it to Port d’U Bein just before sunset. The bridge spans 1.2 kilometers over a lake and next to gorgeous rice paddies. It was built in 1850 and is thought to be the longest teakwood bridge in the world.

I’ll leave you with pictures from my time on the bridge: 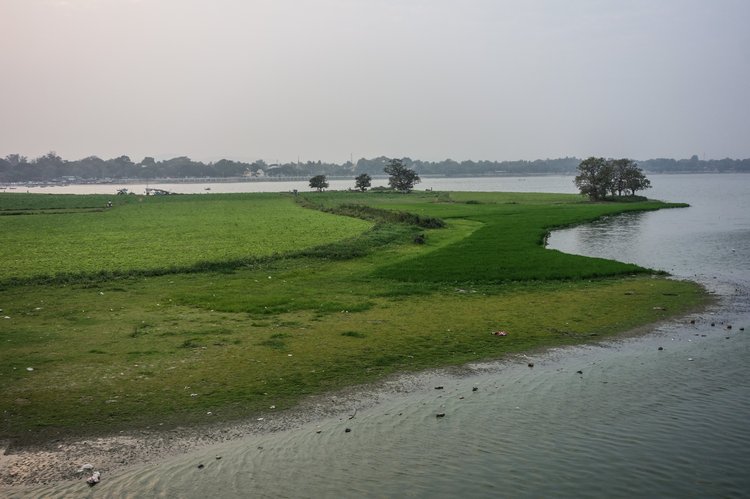 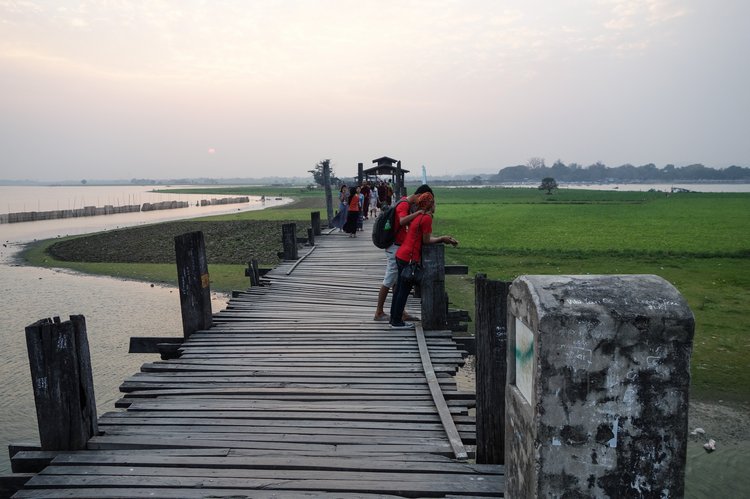