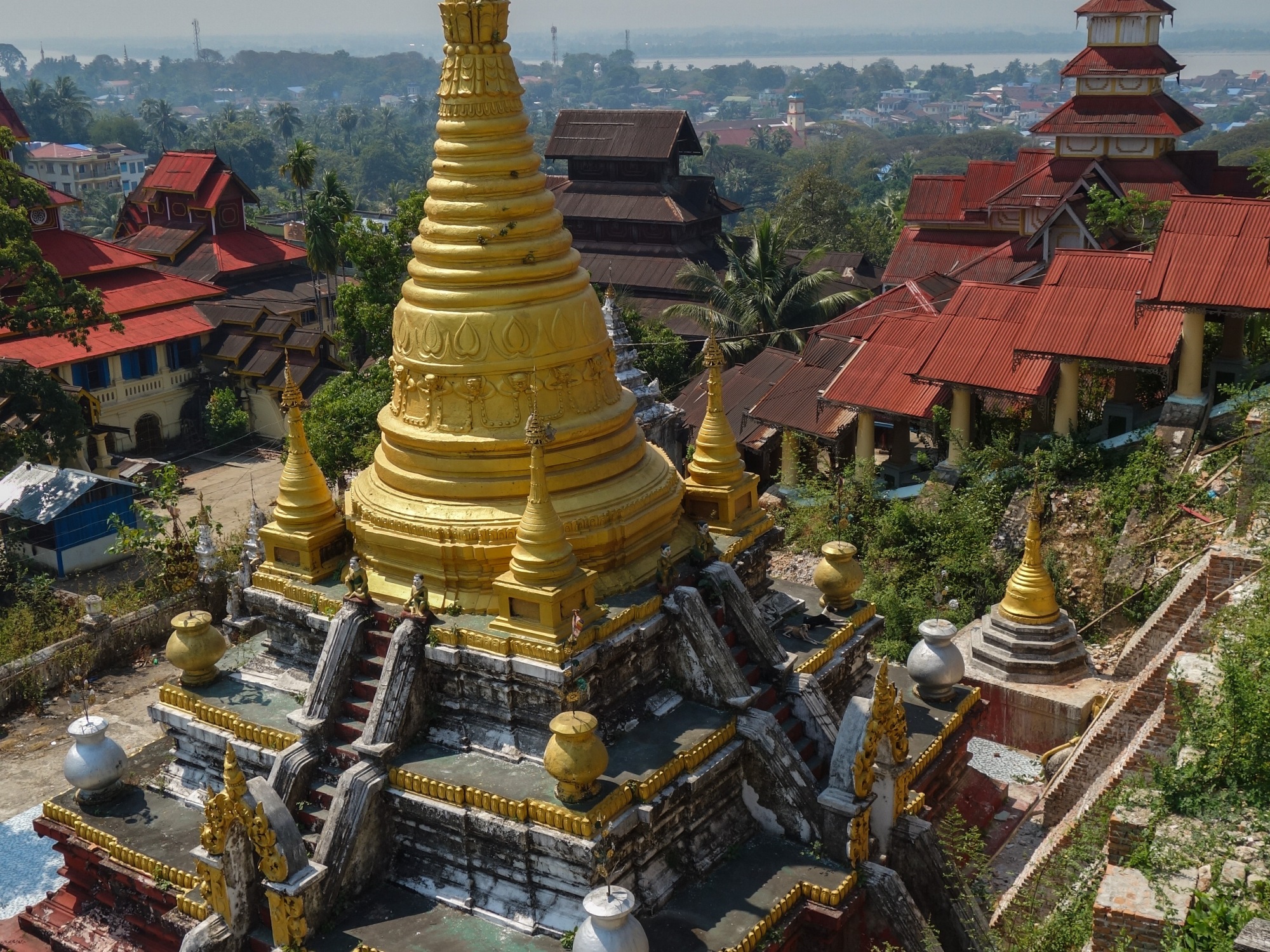 After my difficult hotel stay at the Golden Rock, I was relieved that my hotel in Mawlamyine turned out to be my best hotel stay in my entire time in Myanmar. The Cinderella Hotel had the best service of all of the hotels I stayed at, included a huge and delicious breakfast, and the room was big and clean. But it was all about the little details, they offered full sized complimentary toothbrushes and other toiletries and rather than have a minibar, they had a full fridge filled with lots of food and beverages as well as frosted glasses.

Aside from the awesome hotel, my stay in Mawlamyine was … interesting to say the least. More about that later.

I started off a little bit late because I had arrived at the hotel close to midnight the night before. Mawlamyine was once the British capital of Myanmar, so there are a lot of colonial buildings around that have been somewhat reclaimed by nature in an interesting way. I started off by checking out some of the colonial buildings near my hotel: 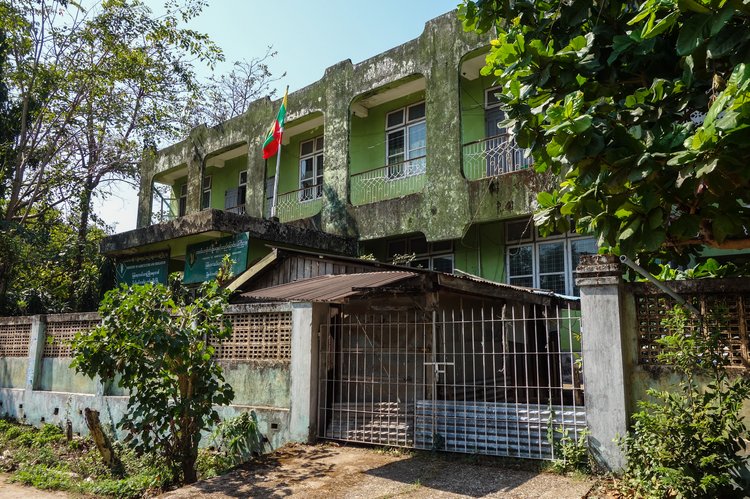 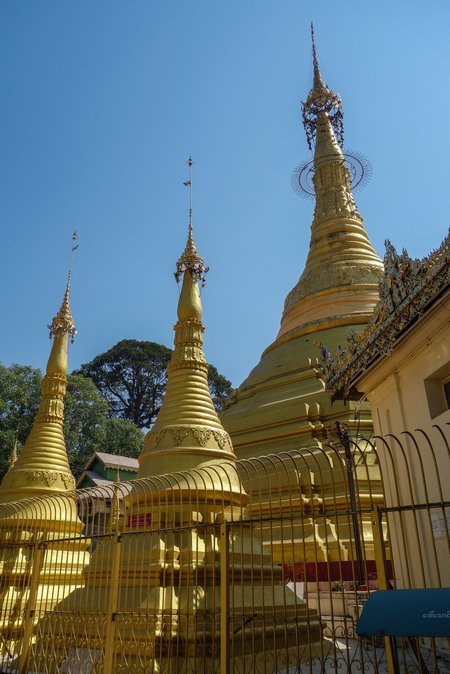 The city has a citadel housing the Kyaik Tan Lan Pagoda. This is by far the most impressive sight in the city, with great views of the area: 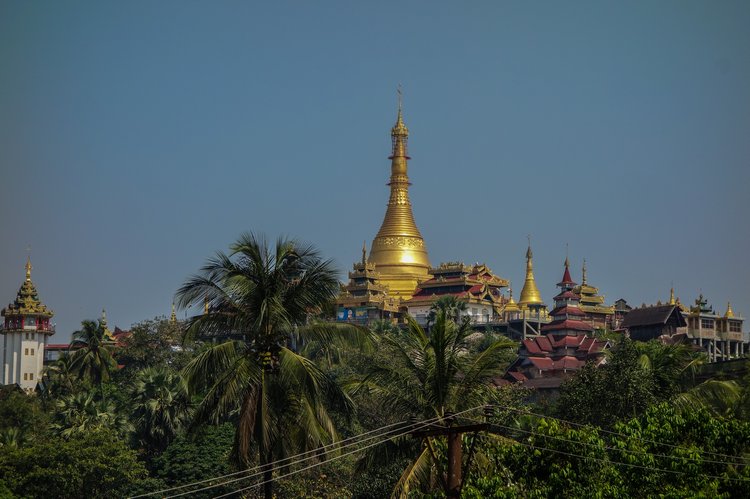 An alley near the citadel: 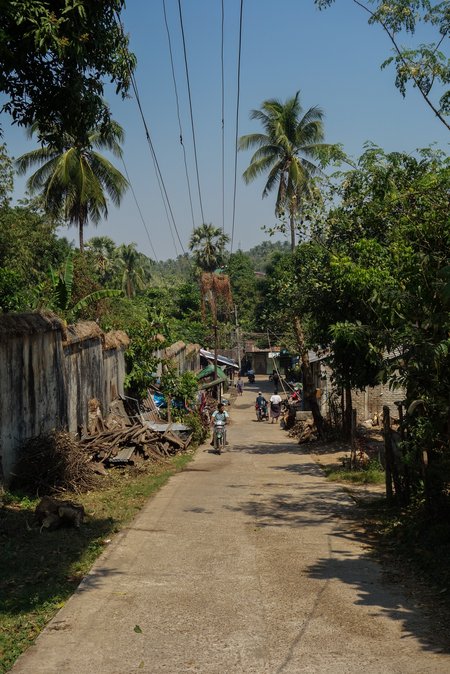 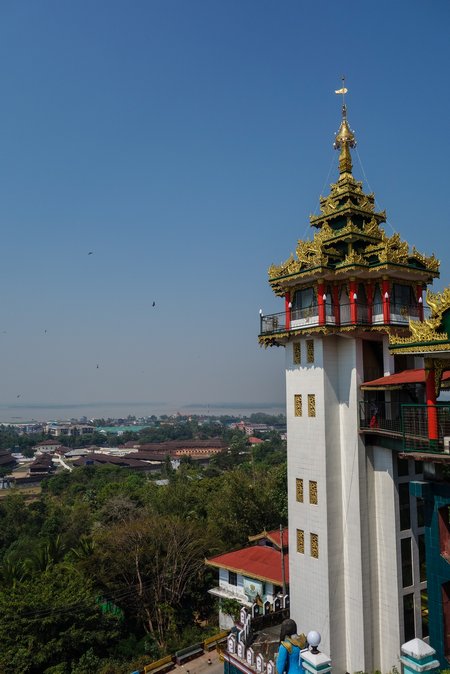 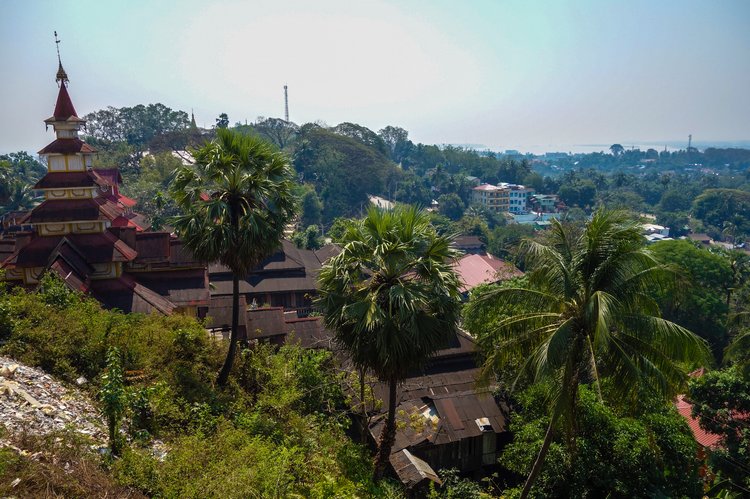 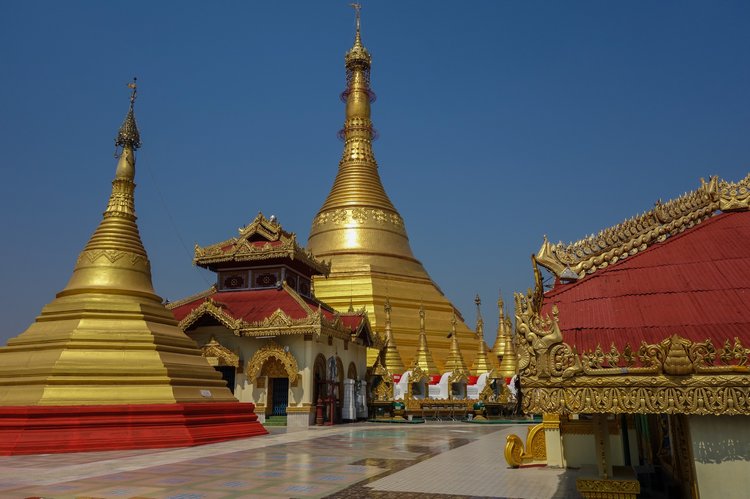 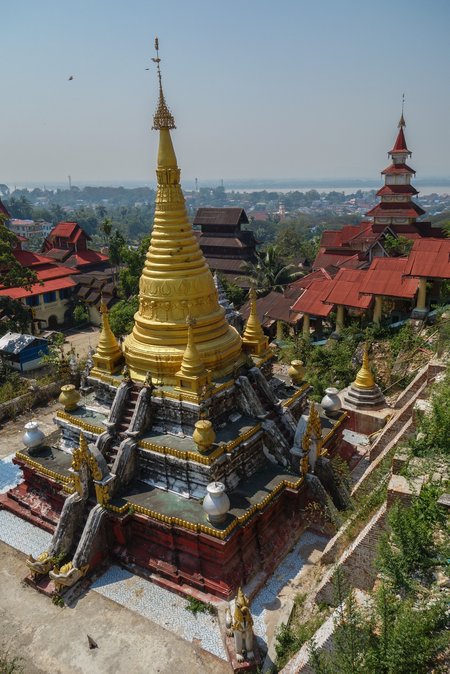 At the north end of the city there is a small island, coloquially known as Shampoo Island, that houses a Buddhist monastery. The island is known by that name because in ancient times, the royal women went to the island several times a year to have their hair washed in the sacred waters. For about $3 CDN a small boat will take you there and back, and it takes about 10 minutes each way.

The boat ride to Shampoo Island: 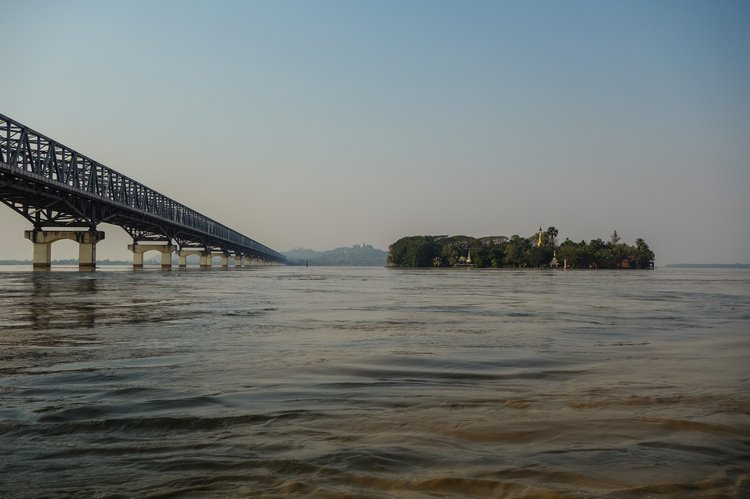 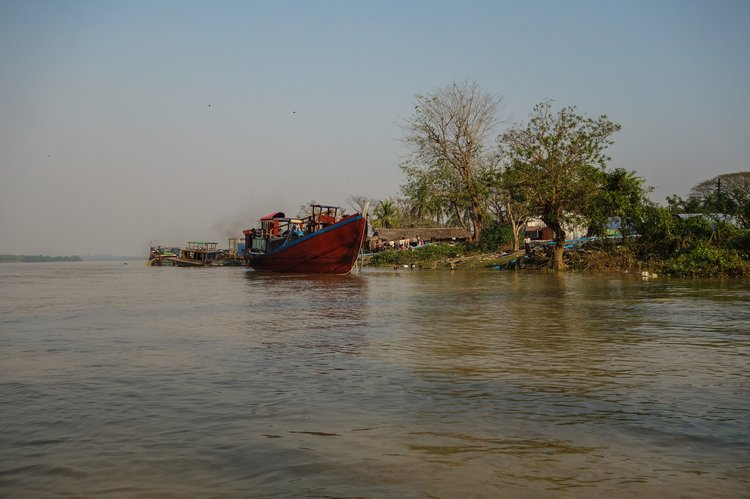 When I got off of the ferry, a very eager and smiley monk was waiting. I was the only tourist on the boat on the way over, the two other passengers were local women.

The monk latched onto me pretty fast, insisting on guiding me around. I didn’t think too much of it, especially because this island does house a lot of Buddhist nuns, so I thought that they perhaps don’t like single men wandering the island on their own.

The very friendly monk started off very quickly pointing out a statue, and insisting that I take a picture. After I took the picture he gestured that he wanted to see the shot, and when he came in for a look, he casually leaned in, resting his hand lightly on my crotch. The touching seemed totally accidental given the super friendly and innocent vibe of this monk who was a full head and 20 kg smaller than me.

A few minutes pass and he again enthusiastically points something out, and again wanted me to take a picture which he then wanted to see. His hand ended up on my crotch again. At this point I was thinking that, just given his height, and the way I was showing him the picture, perhaps that’s where his hand just ended up going when he leans in. For the next few shots that he wanted to see, I stood awkwardly to the side and his hand didn’t come near my crotch, so that brought down my suspicion level.

However, at this point I ran into other tourists on the island, notably a single woman and a couple, and they were freely walking around unsupervised. What made me more suspicious is that at that point, the woman came up to the monk and asked him about the location of the sink that was used to wash the hair of the royals. The monk had just shown me the sink minutes ago, but when she asked, he pretended not to understand what she was talking about. When I reminded him that he had just shown me the sink, he did the closest thing to an eye-roll that he could have done, and quickly rushed to the site, pointed at it impatiently for the woman, and pulled me away. At this point, I was pretty certain what his game was, but I was still a little incredulous that this tiny little monk could be a pervert. Sure enough, next thing I know he’s leading me to an isolated spot and when he asked to see the last picture I took he blatantly put his hand on my crotch. I pushed him away rather brusquely at this point and insisted on seeing the rest of the island on my own.

And there you have it. I was molested by a Buddhist monk as a 36 year-old grown-ass adult.

I do make light of it because I genuinely found it amusing at the time, but only because I was much bigger than the fellow and could have easily beaten him to a pulp. However, I can completely see how the same sort of incident could have been positively terrifying to the average sized woman, let alone a child. All of which to say, this sort of behaviour is obviously not limited to Catholic priests. Since then I have certainly not looked at Buddhist monks in the same way. Also it’s not like there is some sort of phone number for the monastery that I could call to alert them, so only thing I thought of was to write a Trip Advisor review of the place warning people to avoid the molesty monk. It is very evident that he is only into grown men, most of whom will be much bigger than him so that leaves me a bit more comfortable.

I’ll leave you with pictures from Shampoo Island: 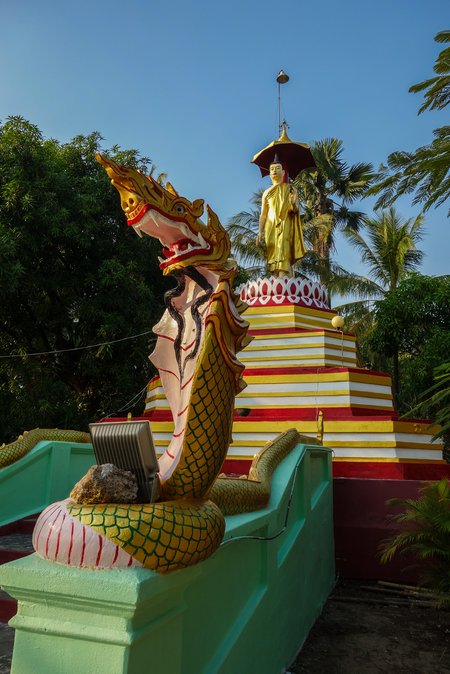 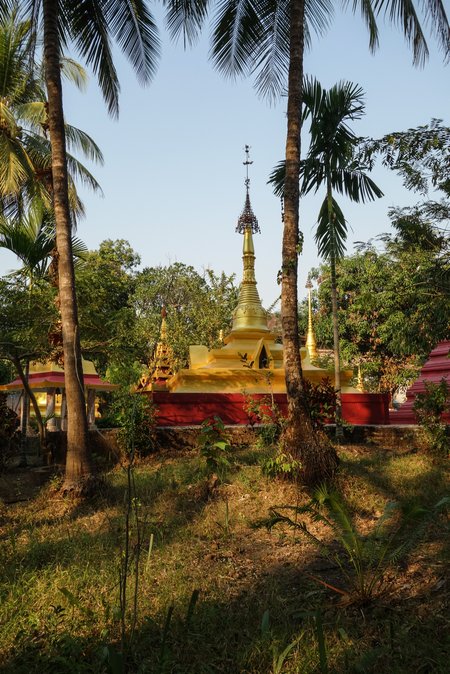 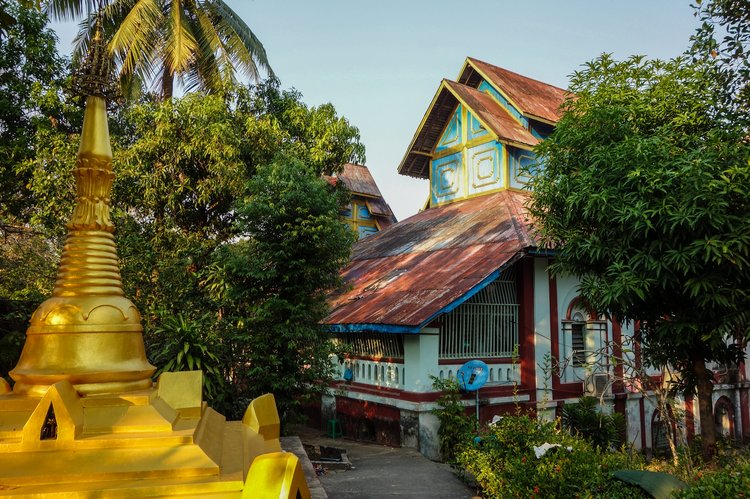 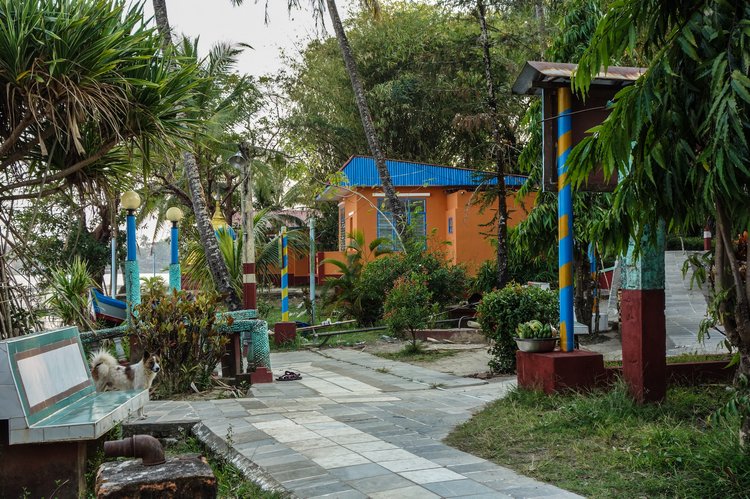